In this edition of Theme Park Bits:

Despite being roughly 200 days into a pandemic – yes, really, we’re at, if not past, the 200-day milestone – theme park news continues unabated. In Anaheim, the question persists: when exactly is Disneyland opening? Last week, Disney Parks held a conference at which Disneyland honcho and fellow Josh, Josh D’Amaro, all but goaded California Governor Gavin Newsom into revealing when parks like Disneyland could reopen. Never mind that details on why exactly Disneyland should be reopened were sparse, outside of just…y’know, everyone else is trying, without good reason, to act like things are normal again. So why not Disney?

Glibness aside, with no new date officially announced, Disney has been sending out cancellation emails to prospective Disneyland guests through October 10. Even that seems like a very aspirational date – things aren’t going to be radically different in two weeks’ time, no matter how much we may want to think otherwise, and no matter how much we have wanted to think otherwise in the last six-plus months. But for now, at least, if you’ve got holiday reservation dates locked in, feel good! You…might just have a chance of going to Disneyland this year!

Whenever Disneyland does reopen, there will obviously be big operational changes. One of the impacts that will be seen by guests is a further shift into mobile ordering for food. If you’ve used the Disneyland app in the past to order your food, then you’ll be right at home with this understandable change. Though there are still a handful of quick-service restaurants in the Anaheim resort that don’t currently offer mobile ordering, it’s easy to imagine that changing once the parks reopen their gates. At the very least, it would be ideal if Market House in Disneyland and Fiddler, Fifer and Practical Cafe in Disney California Adventure adopt mobile ordering – seeing as they’re literal Starbucks locations with a Disney sheen, it’s high time they allow you to order by phone, like at actual Starbucks locations. 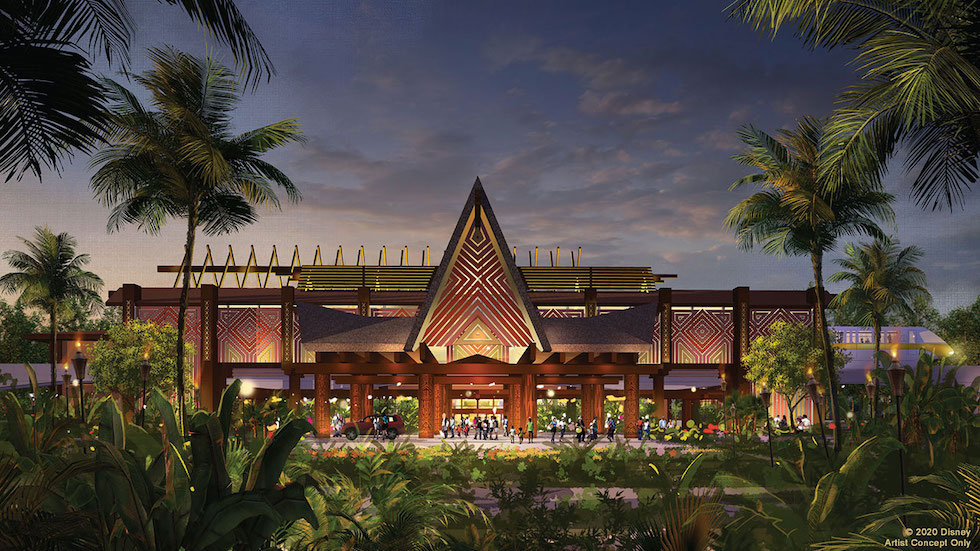 In Orlando, of course, Walt Disney World is open for business on the whole. There are some parts of the resort that are under refurbishment, including the Polynesian Village Resort. The Deluxe resort won’t reopen to guests until next summer, and when it does, it’s going to look just a wee bit different. The picture above is the concept art of what the new entrance to the resort will look like to guests starting next year. The Polynesian Village Resort remains a fan favorite, and anyone who enjoys its exotic theming (including yours truly) is likely to be very pleased by the extensive redesign going on now. The artwork, at least, is encouraging enough that it’s kind of a shame to wait so long for the new and improved design.

There is, of course, much less pleasant news to discuss in Orlando and theme-park news. While, yes, places like Walt Disney World have opened again for business, it’s not actually inspiring lots and lots of guests to show up. So that’s led to shortened operating hours for everything from parks to things like the Disney Skyliner (though shortened operating hours are even impacting Disney’s overseas parks like Disneyland Paris). But it’s impacting hotels as well, such as the Swan and Dolphin, which is laying off more than 1,100 employees. These layoffs are apparently set to go into effect in mid-November, so….y’know, right around the holiday season. Great time of year for layoffs. There’s no easy way to spin this: it’s grim news inspired by the grim situation in which we all find ourselves. I’d love to leave you with a happier note in today’s column, but that seems a mite unfair.

Cool Posts From Around the Web:

MLAs are getting richer; politics is getting dirtier, shows ADR report

Will the Trump era come to an end?