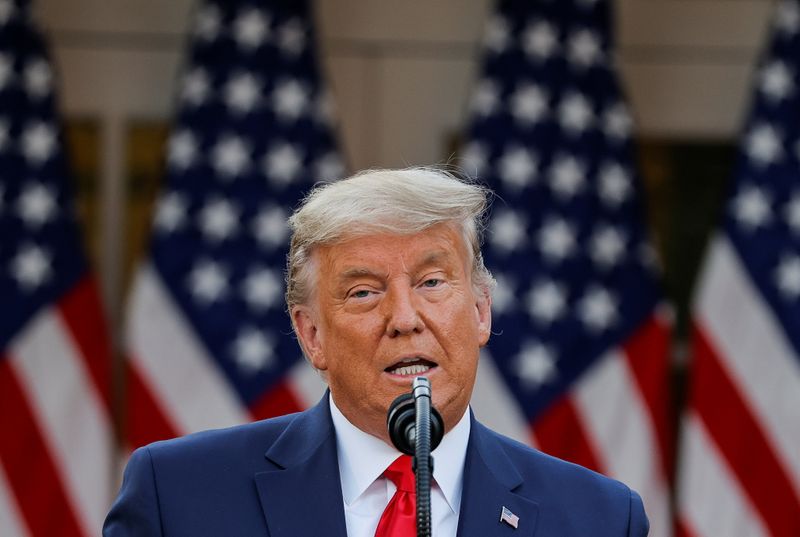 (Reuters) – President Donald Trump will meet with Republican leaders from Michigan at the White House on Friday as his campaign pursues an increasingly desperate bid to overturn the Nov. 3 election result following a series of courtroom defeats.

The Trump campaign’s latest strategy, as described by three people familiar with the plan, is to convince Republican-controlled legislatures in battleground states won by Biden, such as Michigan, to undermine the results.

“The entire election frankly in all the swing states should be overturned and the legislatures should make sure that the electors are selected for Trump,” Sidney Powell, one of Trump’s lawyers, told Fox Business television on Thursday.

President-elect Joe Biden, a Democrat, won the election and is preparing to take office on Jan. 20, but Trump, a Republican, has refused to concede and is searching for a way to invalidate the results, claiming widespread voter fraud.

The Trump team is focusing on Michigan and Pennsylvania for now, but even if both those states flipped to the president he would need another state to overturn its vote to surpass Biden in the Electoral College.

Michigan’s state legislative leaders, Senate Majority Leader Mike Shirkey and House Speaker Lee Chatfield, both Republicans, will visit the White House at Trump’s request, according to a source in Michigan.

The two lawmakers will listen to what the president has to say, the source said. Shirkey told a Michigan news outlet earlier this week that the legislature would not appoint a second slate of electors.

“It’s incredibly dangerous that they are even entertaining the conversation,” Michigan Governor Gretchen Whitmer, a Democrat, told MSNBC. “This is an embarrassment to the state.”

Biden, meanwhile, is due on Friday to meet Democratic leaders in Congress, House of Representatives Speaker Nancy Pelosi and Senate Minority Leader Chuck Schumer after spending most of the week with advisers planning his administration.

Nationally, Biden won nearly 6 million more votes than Trump, a difference of 3.8 percentage points. But the outcome of the election is determined in the Electoral College, where each state’s electoral votes, based largely on population, are typically awarded to the winner of a state’s popular vote.

Biden leads by 306 electoral votes to Trump’s 232 as states work to certify their results at least six days before the Electoral College convenes on Dec. 14.

Legal experts have sounded the alarm at the notion of a sitting president seeking to undermine the will of the voters, though they have expressed skepticism that a state legislature could lawfully substitute its own electors.

Trump’s lawyers are seeking to take the power of appointing electors away from state governors and secretaries of state and give it to friendly state lawmakers from his party, saying the U.S. Constitution gives legislatures the ultimate authority.

Reaching out to state officials represents a shift in Trump’s attempts to overturn the result after his campaign failed to muster evidence to support the president’s claims of widespread voter fraud.

Election officials have said they saw no evidence of any major irregularities.

Trump’s attempts to reverse the outcome via lawsuits and recounts have met with little success.

A hand recount of Georgia’s roughly 5 million votes wrapped up on Thursday, affirming Biden’s victory there, while judges in three states rejected bids by the Trump campaign to challenge vote counts.

Despite the setbacks, the Trump campaign has not abandoned its legal efforts.

Rudy Giuliani, the president’s personal lawyer, said on Thursday he planned to file more lawsuits, accusing Democrats of masterminding a “national conspiracy” to steal the election, though he offered no evidence to support the claim.

Biden called Trump’s attempts “totally irresponsible” on Thursday, though he has expressed little concern they will succeed in preventing him from taking office on Jan. 20.

Biden has spent the week putting together his team. His incoming chief of staff, Ron Klain, told CNN on Thursday that Biden would announce more White House officials on Friday, after naming several senior staff members earlier this week.

Biden said on Thursday he had selected a treasury secretary and could announce his pick as soon as next week.

‘I was walking into an ambush’: Former Wallaby Tony Daly speaks out about childhood sexual abuse

Poverty of The Mega-Rich, By Osmund Agbo – Newsdiaryonline