LOS BAÑOS, Laguna, Philippines — Weng Espiritu-Borromeo, 38, calls herself a compulsive buyer — even when shopping for plants. Between cost and aesthetics, she’d go for the latter.

While her parents have been gardening as therapy for her father, who suffered a stroke in 2014, she only started growing indoor plants when the coronavirus pandemic struck.

“When I bought my first plants, it felt like having given birth to a child again,” she said.

Borromeo now owns a collection of selloum leaves, a pine tree, jade plants, snake plants and golden pothos among palms and air plants in Taytay town, Rizal province. All of them she bought online from a seller in Bulacan province.

She started growing backyard vegetables, too, a safety net in case the lockdown disrupted food supply.

The pandemic spurred a brisk “plant economy” not only in the Philippines but across urban centers in Southeast Asia, said Theresa Mundita Lim, director of the Laguna-based Asean Centre for Biodiversity.

But if left unchecked, it could drive fast forest poaching or unwittingly spread invasive species when transporting nonnative plants.

In a business that seemed fairly safe, it’s one thing that needs nipping in the bud. 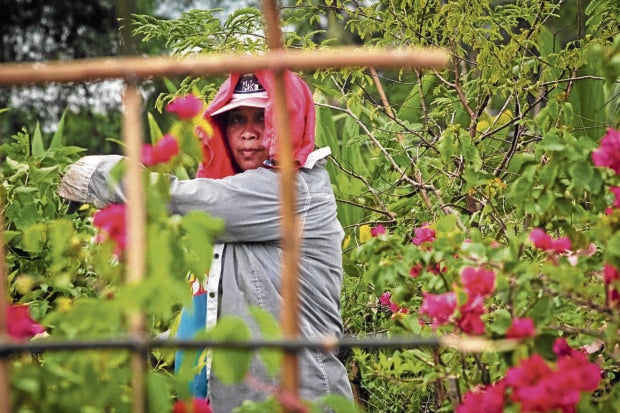 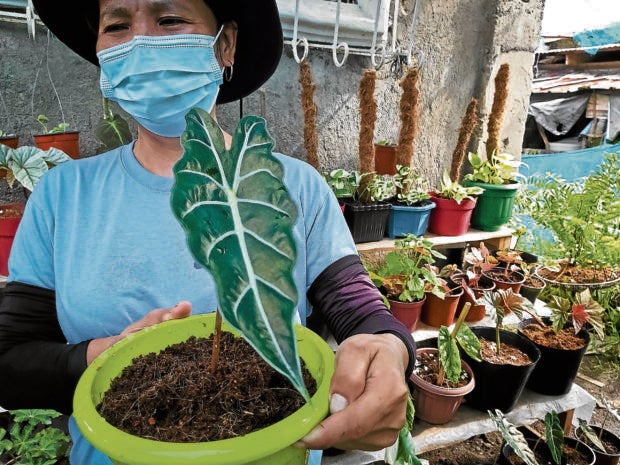 RESURGENCE Demand for ornamental plants has seen a resurgence during the COVID-19 pandemic as households turn their attention to gardening as a way to ease anxiety and relieve stress. Garden owners in the town of Bay in Laguna province say indoor plants, like Alocasia, or African mask plant, are among the most sought-after varieties. —CHRIS QUINTANA

“Because we are experiencing limited mobility, the situation encourages more people to resort to backyard gardening [to] while away their time and relieve stress,” Lim said.

Interestingly, only in the Philippines there is a term for people jumping on the bandwagon—“plantitos” or “plantitas.”

In Malaysia, a market survey in May showed 86 percent of respondents having bought gardening tools during the movement control order. In Indonesia, houseplants, like Monstera adansonii (Rp 300,000 to Rp 1 million, or $20 to $70), have become popular online.

Susan Aquino-Ong, who teaches therapeutic horticulture at the University of the Philippines Los Baños (UPLB) and a fellow of the Philippine Association of Landscape Architects, said humans were “genetically programmed” to connect with nature and gardening was a collective “response to fight for emotional stability” during the pandemic.

“We’ve seen this during the Great Depression in the 1930s when people resorted to planting and interior gardens flourished,” she said.

In the Philippines, the multimillion-dollar ornamental industry blossomed in the 1970s, driven by the beautification programs of then first lady Imelda Marcos.

But the Philippines has not expanded its ornamental industry as much as the Netherlands and the United States where transactions involved billions of dollars worth of exports and imports.

Locally, it was on a steady rise until 2000 when the Philippines underwent civil unrest leading to then President Joseph Estrada’s ouster.

“Plants feed the soul. It fills a void you never even knew existed,” Ong said.

But they also fill a void of another sort for the likes of Elma Tandang, 41, who supplied asters for 16 years to Manila’s Dangwa flower market until it was shuttered in March.

“When they reopened Dangwa, we hurriedly got a travel pass only to realize it was useless because they suspended the bus [trips],” she said.

In September, Los Baños opened a “mini-Dangwa” or stalls for local cut flower suppliers displaced by the pandemic. They have since included potted plants, ferns and succulents, some from Silang town in Cavite province or from Cagayan province.

Tandang said the demand for ornamental plants pushed the price thrice higher, yet physical stores were “bait fishing” for customers, usually on private cars that pulled over the national highway.

She said it might take a while before hobbyists discover them, but online, aroids, such as Caladium, pothos, Monstera, Philodendron selloum, Rhaphidophora and Aglaonema, already gained a large following, said Annalee Hadsall, a botany professor at UPLB.

A pot of the slow-growing aglaonema that makes an excellent foliage costs P1,000 online.

But so are the rare and exotic orchids, and hoyas, or the endangered pitcher plants, collected off limestone cliffs in Cebu, Hadsall said.

Some houseplants take years to spawn a branch, while others, like the pitcher, barely survive a week in lowland or urban centers.

Theresa Tenazas, officer in charge of the Department of Environment and Natural Resources (DENR) Wildlife Resources Division, said exotic plants were being traded like elephant ivory or a rhino horn—“the harder to get, the more value is added to it.”

The Philippines is one of the countries with the highest endemicity in the world and the fifth in terms of the number of plant species.

In DENR Administrative Order No. 2017-11, the national list identified 984 threatened plant species in varying conservation status. More than 700 of them are endemic. 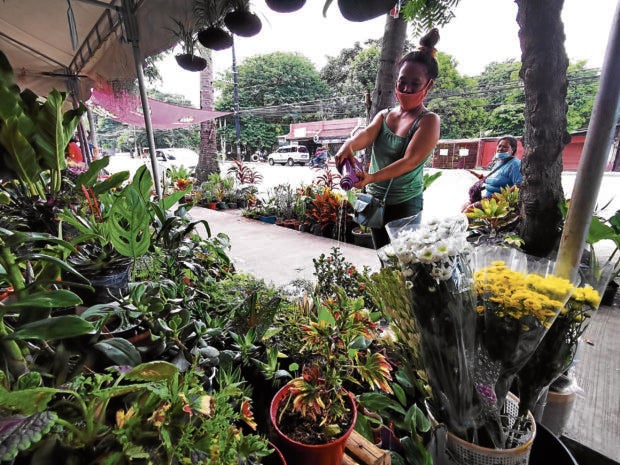 GREEN STOP The local government of Los Baños in Laguna has set up along the national highway a small version of Manila’s popular Dangwa flower market for cut flower growers and plant traders after they encountered problems in transporting their products to Metro Manila due to travel restrictions. —CLIFFORD NUÑEZ

This increases Philippines’ potential to become a major consumer and source of traded flora, as it has been with wild fauna.

Between 1996 and 2018, 12 of the government’s major wildlife seizures involved smuggled animals, while only one operation in 2017 led to the confiscation of 1,000 pitcher plants and lady slipper orchids, based on data from the Biodiversity Management Bureau (BMB).

They also heightened wildlife monitoring in Butuan City, Claver in Surigao del Norte, and in Zamboanga Peninsula, where alarming poaching activities had been reported since August.

Authorities have appealed to hobbyists to buy only from legitimate nurseries and to propagators to secure permits for parental stocks.

In March, the DENR suspended the transport permits for all wildlife and forest products as governments recognized the crucial role of wildlife trade in the spread of COVID-19, a zoonotic disease. The suspension was lifted in May when the lockdown was eased and limited economic activities resumed. 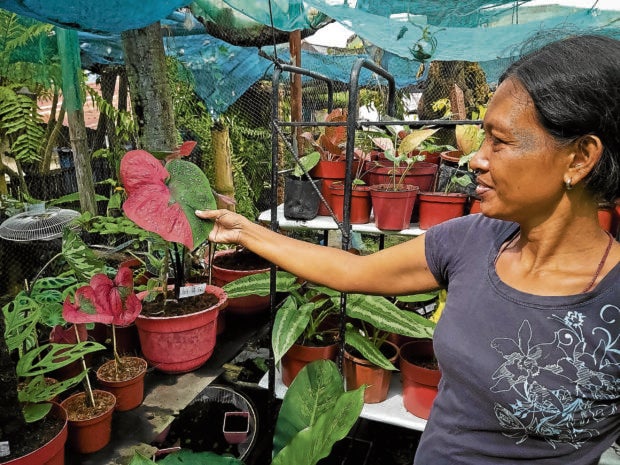 TWO SHADES Rhoda Felix says the “doble kara” (double shade, or having two faces or colors) type Caladium is among the bestselling potted plants in her garden in Bay, Laguna. —CHRIS QUINTANA

While there is little documentation of disease transmission from plants to plants or from plants to animals or humans, scientists have been concerned about plants, traded as commodity, becoming an unwilling vector in spreading invasive animal or insect species.

There were also weeds, like the coronitas (Lantana camara) and sky flower (Thunbergia grandiflora), previously introduced into the market as ornamental plants but ended up “feral,” or abandoned in the environment after growers stopped tending to them.

In 2000, UPLB scientists spotted the invasive Asian painted frog (Kaloula pulchra) in Laguna and believed they came with the potted bromeliads imported from Southeast Asian countries.

In 2013, another invasive species native to the Caribbean islands, the greenhouse frog (Eleutherodactylus planirostris), was detected in Mindanao.

Lit said the Asian painted frog must have burrowed through the potting soil, while university researcher Camila Meneses said the greenhouse frog possibly survived in transit through imported exotic plants.

The presence of these alien frog species has been recorded elsewhere in the Philippines since.

“Plants are at the bottom of the food chain that its mere translocation may disrupt the natural food flow [in the ecosystem],” Meneses said.

Who Wins in a Fight Between Fortnite and Apple?

The Value Of Rare And Old Whisky Looks Set To Continue...