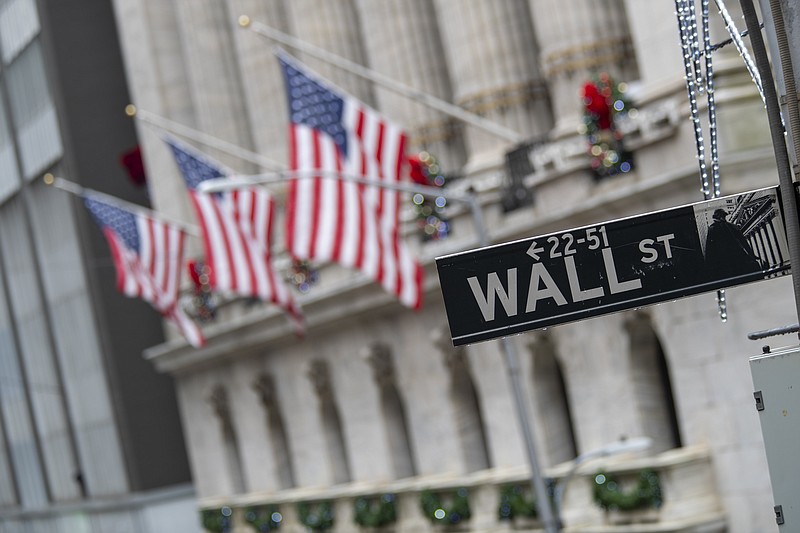 FILE – In this Jan. 3, 2020 file photo, the Wall St. street sign is framed by American flags flying outside the New York Stock Exchange in New York. Stocks are slipping in early trading on Wall Street Thursday, Aug. 20, following discouraging data about the economy, as the number of layoffs sweeping the country picks up again. The S&P 500 was down 0.2% after the first 20 minutes of trading, following up on sharper losses for stock markets overseas. (AP Photo/Mary Altaffer, File)

The S&P 500 rose 0.3% after rallying back from an earlier 0.6% loss as investors weighed new government data showing an increase in the number of Americans who sought unemployment aid last week. A separate report from the Federal Reserve Bank of Philadelphia said manufacturing activity in its region is slowing. Like the jobless claims report, that reading was weaker than economists had forecast.

The discouraging economic reports helped send two out of every three stocks in the S&P 500 lower. Energy producers and financial companies saw some of the sharpest drops. Treasury yields also fell, reflecting caution in the market.

But tech stocks in the S&P 500 nevertheless rose 1.4%, continuing a remarkable run of resilience that has carried through the pandemic. The industry has been delivering big profits as the pandemic accelerates work-from-home and other tech-friendly trends. And because they’re among the biggest stocks by total market value, their movements carry more weight in the index.

The initial downward move for stocks Tuesday followed a government report indicating that slightly more than 1.1 million U.S. workers applied for unemployment benefits last week. That’s up from 971,000 the week before and an indication that the pace of improvements for layoffs may be stalling.

The number of jobless claims had been on a steady march downward since March, and the previous week marked the first time the total had eased below 1 million since just before the pandemic shuttered businesses across the country.

“The market’s looking through” the worse-than-expected report on jobless claims, said Scott Wren, senior global market strategist at Wells Fargo Investment Institute. “The trend is for continued improvement in the labor market.”

Still, with so much uncertainty still hanging over markets, he said he wouldn’t be surprised to see it take a “time out” after the S&P 500 returned to a record high Tuesday.

Thursday’s back-and-forth moves for the broader market follow up on its sudden loss of momentum Wednesday. Stock indexes began dipping immediately after the Federal Reserve released the minutes from its last meeting.

The Fed has been a central reason for the stock market’s rocket ride back to record heights, due to its promises to keep short-term interest rates at their record low of nearly zero and to continue buying reams of bonds to support markets. The Fed’s minutes showed that policymakers still find it very difficult to predict the path of the economy, which depends so much on what happens with the virus.

Apple was among the stocks the led the tech sector’s gains Tuesday. The iPhone maker rose 2.2% and is once again flirting with a total market value of $2 trillion. It’s the first U.S. stock to cross that threshold.

Uber and Lyft bounced higher after an appeals court said the ride-hailing giants can continue treating their drivers as independent contractors in California while an appeal works its way through the court. Both companies had threatened to shut down if a ruling took effect this morning that would have forced them to treat all their drivers as employees, a change they said would be impossible to accomplish overnight. Uber jumped 6.8% and Lyft gained 5.8%.

Information for this article was contributed by Yuri Kageyama of The Associated Press.

Indian Women Behind The Camera: How Bollywood Treats Them

Salesforce or Zoho- Which CRM Suits your Business Better?