Stocks fell for their fourth straight week, a streak not seen in the S&P 500 since the trade war escalation last August. In a break with the prior three weeks, however, the selling last week was concentrated in non-U.S. equities. The S&P 500 outperformed strongly, down 0.6% on the week, while international developed markets fell 4.2% (MXEA) and emerging markets was off by 4.4% (MXEF) [Figure 1]. 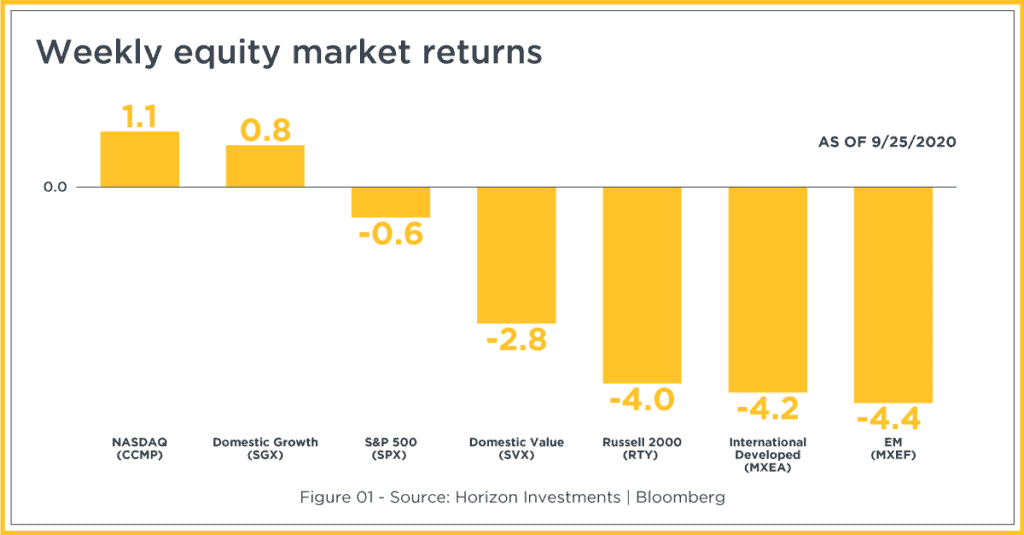 Equity market leadership in the U.S. continues to be choppy, but last week’s stability in the leader in this recent sell off, the tech-heavy NASDAQ, is an encouraging sign. It was up 1.1% last week, while small caps fell 4.0% (RTY) [Figure 1].

Growth also strongly outperformed value, pulling ahead on the month. Despite the constant chatter, we’re just not seeing the makings of a durable rotation in favor of value. Fundamentals need to accompany the price action—otherwise, it’s just noise.

The S&P 500 closed Friday about 8% lower than its peak on September 2nd, but the CBOE Volatility Index (VIX) is basically flat over that time. Looking at that same relationship for the NASDAQ 100 shows an approximate 10% loss in the index while the CBOE NASDAQ-100 Volatility Index (VXN) is about 2 vols lower. That lack of hedging interest reinforces our view that this is a correction to speculative topside buying made worse by low liquidity, not a new trend.

Investor concern about the 2020 election is on the rise and seems to have been behind some of this recent selling in equities. It’s now more expensive to hedge, in volatility terms, for the month of December than November — a sign that investors are expecting significant delays in the election results (and potentially worse) of the upcoming election. It appears the Supreme Court vacancy has energized both sides, Democrats and Republicans. As a result, election odds didn’t change much last week. All eyes now are on Tuesday night’s debate.

Covid-19 back in the market’s sights?

Despite never really going away, Covid-fatigue had cast a spell on the market since August.  That’s no longer the case as a true second wave seems to have taken hold in Europe, which is causing new restrictions that should slow and perhaps even reverse the economic recovery. Covid’s re-entry into the market’s consciousness likely contributed to the weakness in international developed equities last week. U.S. cases are rising as well. And while additional restrictions here in the U.S. are not yet being talked about, in our view Europe remains a better model than Asia for the U.S.

On the economic data front, it’s more of the same. Consumer confidence is a standout, supporting the purchase of goods, like sporting and recreation-related equipment and home entertainment purchases. Who among us hasn’t made a pandemic-related purchase to help counter the effects of stay-at-home restlessness and the challenge of our usual travel and entertainment choices not being available to us? That is causing manufacturing, and export economies, to surprise to the upside across the globe. Services, however, continue to lag, a troubling sign that tells us the next leg of the recovery will likely be slower and more difficult.

Government bond yields fell last week as a slew of Fed governors were on the tape discussing their new policy framework. The curve flattened, led lower by the long-end, with the U.S. 30-Year Treasury down 6 basis points (bps) for the week and the 10-Year and 2-Year down 4 bps and 1 bps, respectively.

Each of these major benchmarks has moved less than 2 bps in the month of September. That’s despite a sharp sell-off in equities and new forward guidance from the Fed. Our take? Get used to it. Lower for longer means all yields lower, not just the front end. And it means volatility will remain subdued; the MOVE Index, a measure of bond volatility, closed at all-time lows on Friday [Figure 2]. 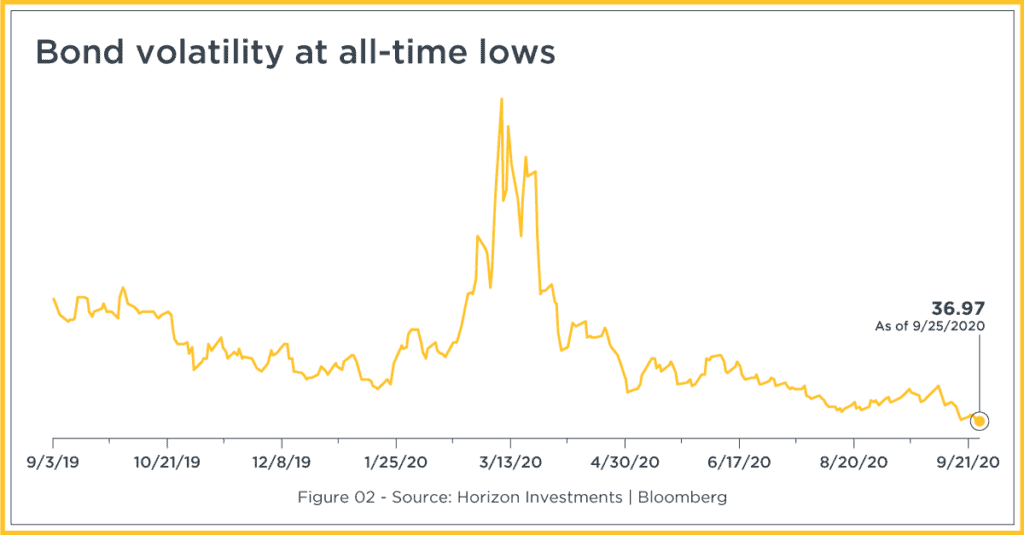 Market-based inflation expectations continue to decline as well. After peaking at the end of August, 10-year breakevens are down 22 bps. Once again, this was a false dawn in the rotation/reflation trade thesis. The Fed can’t be happy with this, and their conflicting remarks this past week indicate that they still have some work to do in communicating their new framework.

Credit had a tough week, with noticeable pressure on spreads across the board, as investment-grade (IG) and high-yield (HY) were up 12 bps and 47 bps, respectively.  The outflows in HY were particularly large, a sharp contrast to the low volume moves we’ve seen in the equity market.  To us this just seems to be some catch-up with the weakness in equities; prior to last week, IG spreads were actually tighter for the month of September, while HY was only 13 bps wider.

The USD rose strongly, up 2.0% on a broad basis (BBDXY), as key technical levels were broken and short-term stop losses triggered. Last week’s move was the biggest since early April, and serves as a reminder that the “dollar demise” thesis works better in academia than in reality. It also highlights that the recent USD weakness was really a story of Euro strength, now something called into serious question as their Covid situation deteriorates [Figure 3]. 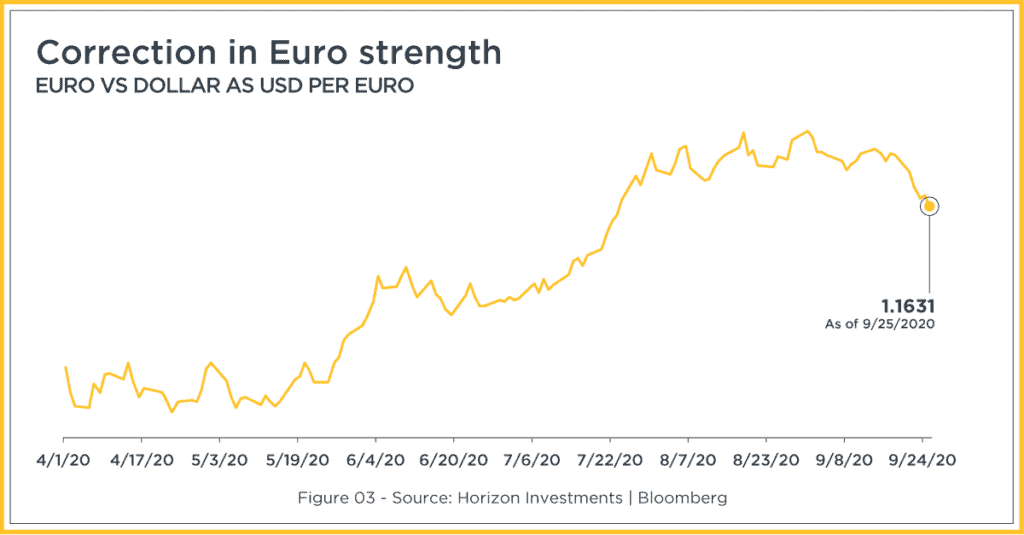 All Alternative Energy Stories and Videos

Vietjet honoured as the low-cost carrier of the year for cargo...

The Dior x Air Jordan 1 Was the Most Talked About...