BHUBANESWAR:  Funds sanctioned by both State and Centre for improvement of higher education quality and research have remained unutilised to a large extent by Government-run universities and other autonomous institutes. Statistics of the Higher Education department reveal that only 27 per cent of Rashtriya Uchchatar Shiksha Abhiyan (RUSA) funds under the Ministry of Education have been utilised so far. In 2019-20, Odisha was sanctioned Rs 200 crore under RUSA for development of higher education but so far, only Rs 54.90 crore has been utilised. 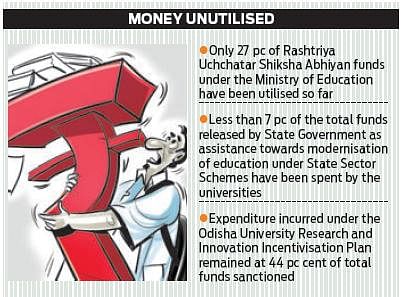 Similarly, less than seven per cent of the total funds released by State Government as assistance towards modernisation of education under State Sector Schemes (SSS) have been spent by the universities. Only Rs 13.26 lakh of the Rs 2 crore provided under Modernisation of Quality Education head in the previous year was spent. There are other programmes too where budget expenditure was less by the universities and autonomous institutes. Only Rs 36.51 lakh of the Rs 1 crore sanctioned for coaching to students for Civil Services exams has been spent, while Rs 42.80 crore was utilised under World Bank funded Higher Education Programme for Excellence & Equity against the budget provision of around Rs 82.2 crore.

This apart, the expenditure incurred under the Odisha University Research and Innovation Incentivisation Plan also remained at around 44 per cent of funds set aside. The programme was launched by the State Government in November 2018 to provide scholarship to talented scholars of State-run universities and higher education institutions to help them undertake full-time research in Odisha.

It also aimed at promoting research in emerging areas by providing financial incentives to young faculties in the form of research fellowship, seed funding and supporting them in publication related expenses. Of the Rs 3 crore budget provision made for the scheme last year, only Rs 1.32 crore was spent. Officials, however, said the expenditure remained well in other heads related to infrastructure development.

What are the Storage Area Network Market opportunities, risk and overview?...