The ultimate Hamptons beach pad! Shoreline home on with 360-degree views of the water on ‘Billionaire Lane’ is for sale for $150million

By James Gordon For Dailymail.com

A Hampton’s home that has sat on the market for three years $150million comes complete with two putting greens for keen golfers and stunning views of the ocean and nearby bay.

The Southampton, New York property occupies 14 acres across three lots and sits on Meadow Lane, dubbed by Forbes Magazine in 2007 as ‘Billionaire Lane’.

The eight-bedroom, 12,000 square foot home offers 360-degree views of the water and occupies a 700 foot stretch of shoreline which can be reached by three private walkways. 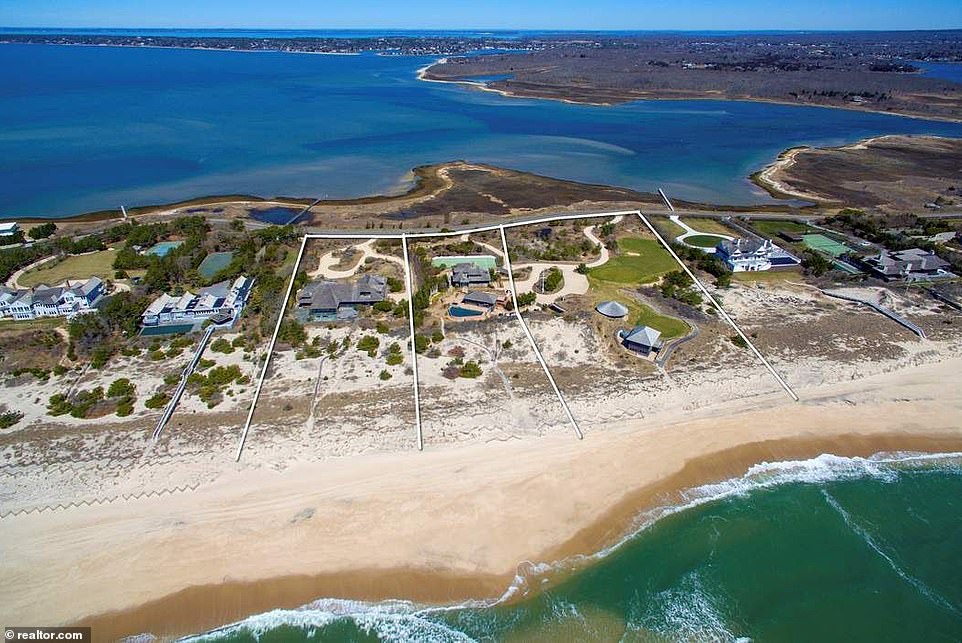 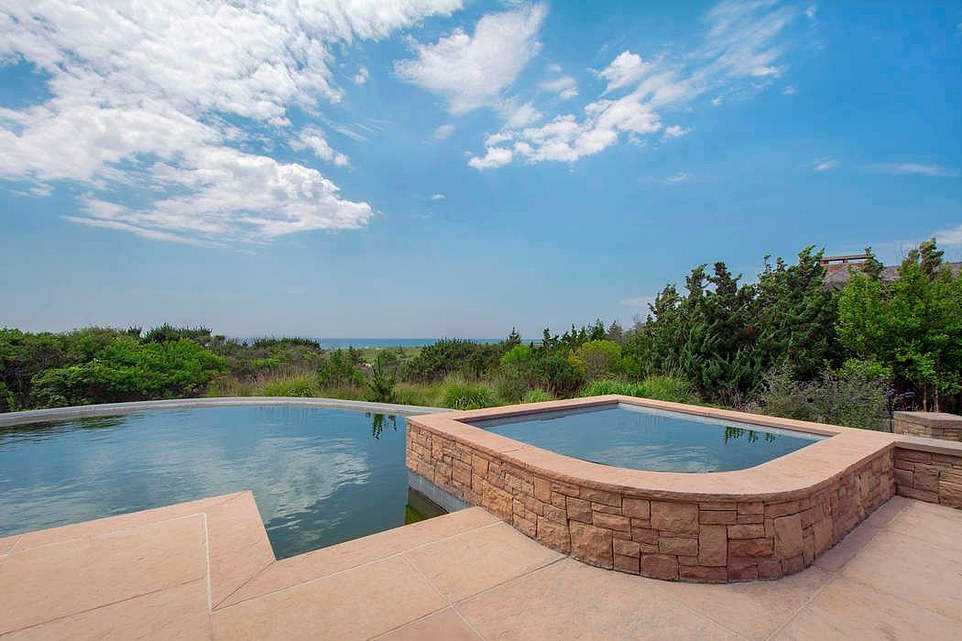 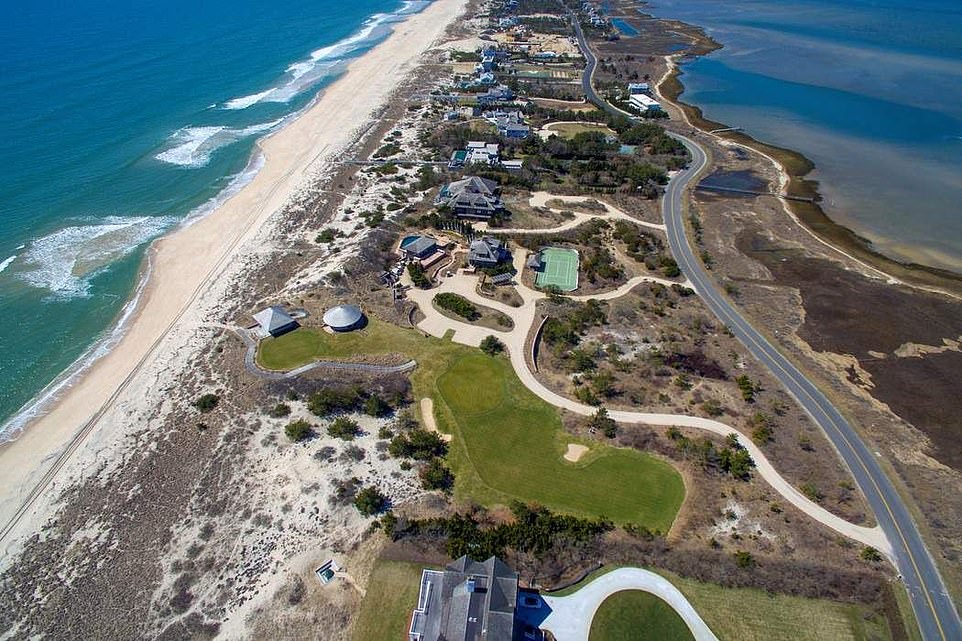 ‘Billionaire’s Lane’ – officially called Meadow Lane (pictured) – overlooks Shinnecock Bay to the north and the Atlantic Ocean to the south, seen on the left. The property spans the finger of land and sits across both 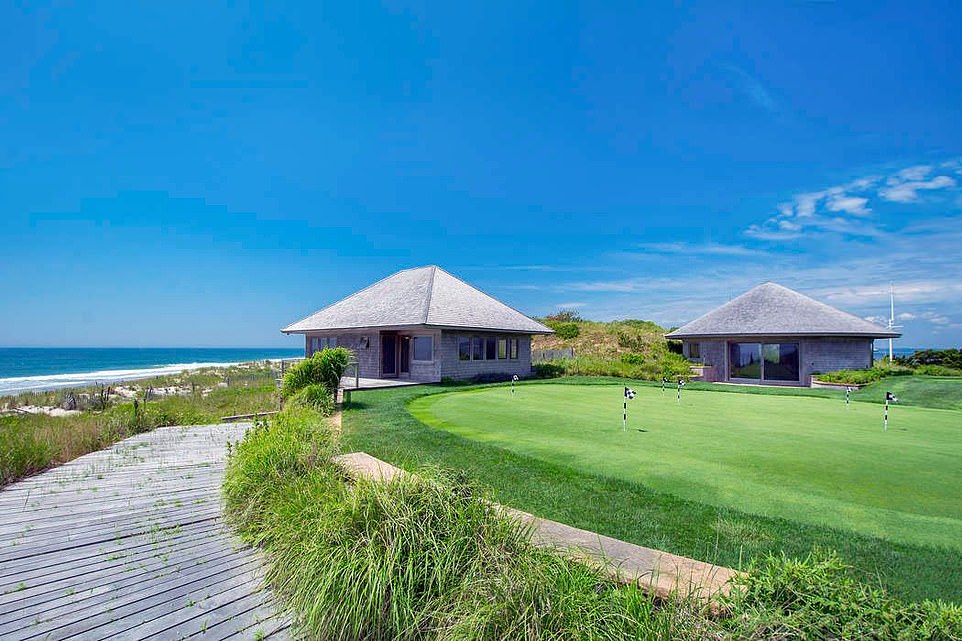 On the other side of the long, stretch of land, which separates the ocean from Shinnecock Bay, is a 2.5-acre parcel of undeveloped terrain.

It ensures the property touches both the bay and the ocean, and completely occupies the width of the land.

The location is aimed at those who particularly love the outdoors. A tennis court, pool and spa along with two putting greens give owners and guests alike, plenty of ways in which to while away their time.

The house was built in the 1990s and has been on the market for three years but still hasn’t managed to attract a billionaire buyer just yet. 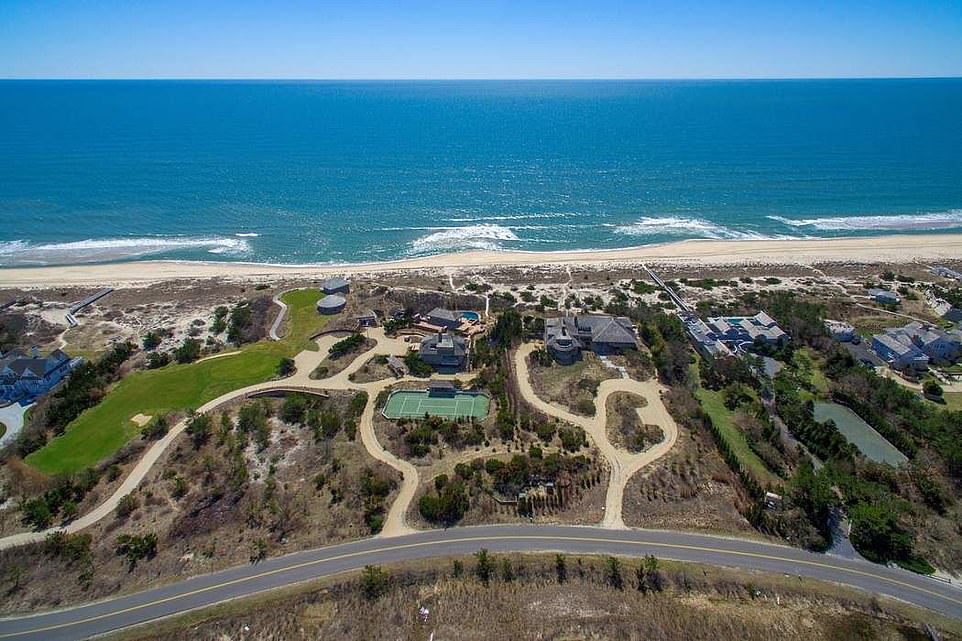 As well as the mansion (seen on the right-hand side), there are two smaller structures with tennis courts and a swimming pool (center) and a golf course with two putting greens (right) and two golf cottages. All overlook the Atlantic Ocean 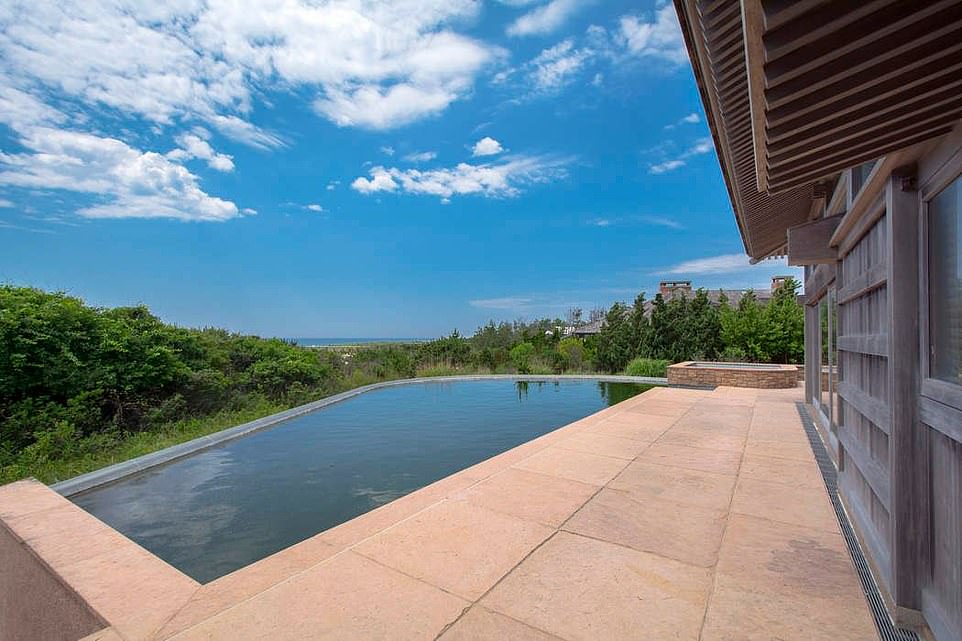 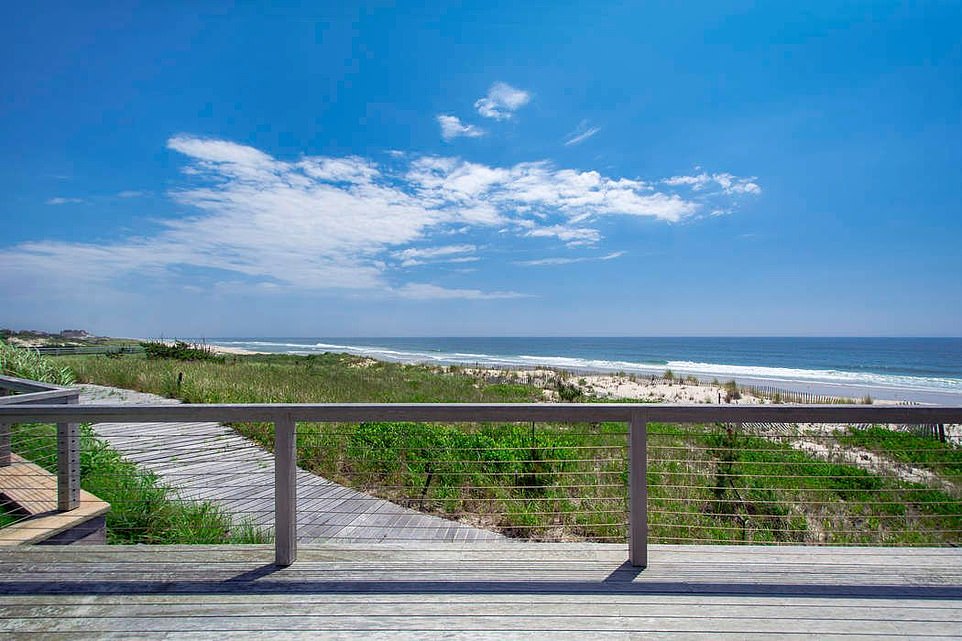 The land the property occupies was originally going to be the site of a family compound but the plans never materialized and the owner decided to place the entire property back on the market in 2017 where it remains.

The enormous parcel of land is being sold as one massive property by listing agent Harald Grant of Sotheby’s International Realty, with the buildings still standing and ready for use.

At one time, Meadow Lane was home to 13 CEOs and tycoons including David Koch, executive vice president of Koch Industries until his retirement in 2018. Mr Koch passed away last August. Fashion designer Calvin Klein; and CEO of Loews Jimmy Tisch also live along the prestigious strip of land.

The parcels were all bought from media mogul Robert FX Sillerman who died last November. He paid around $114 million in total.

Grant says that whoever buys the substantial property will almost certainly demolish the buildings and start over. 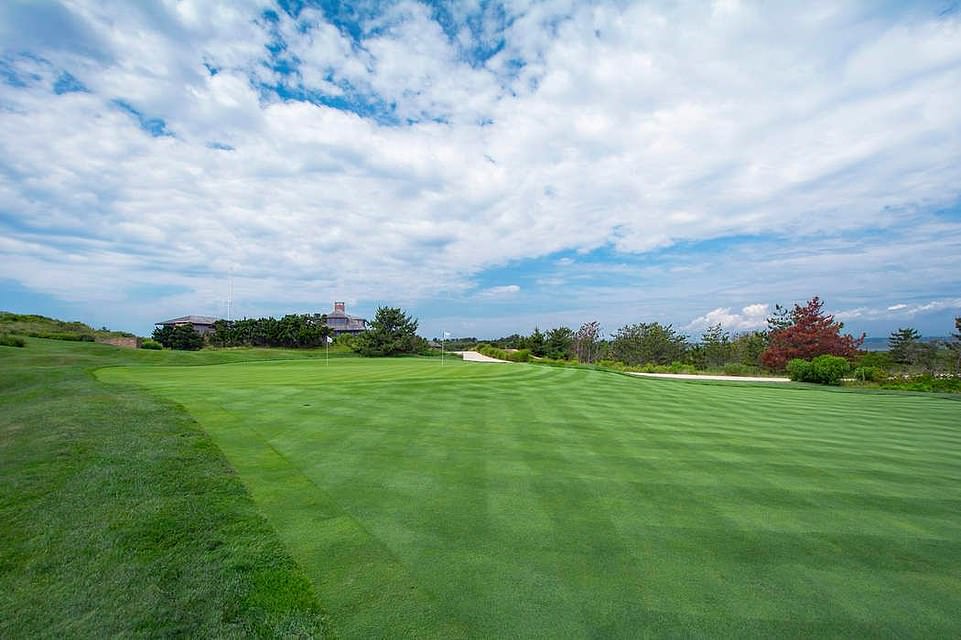 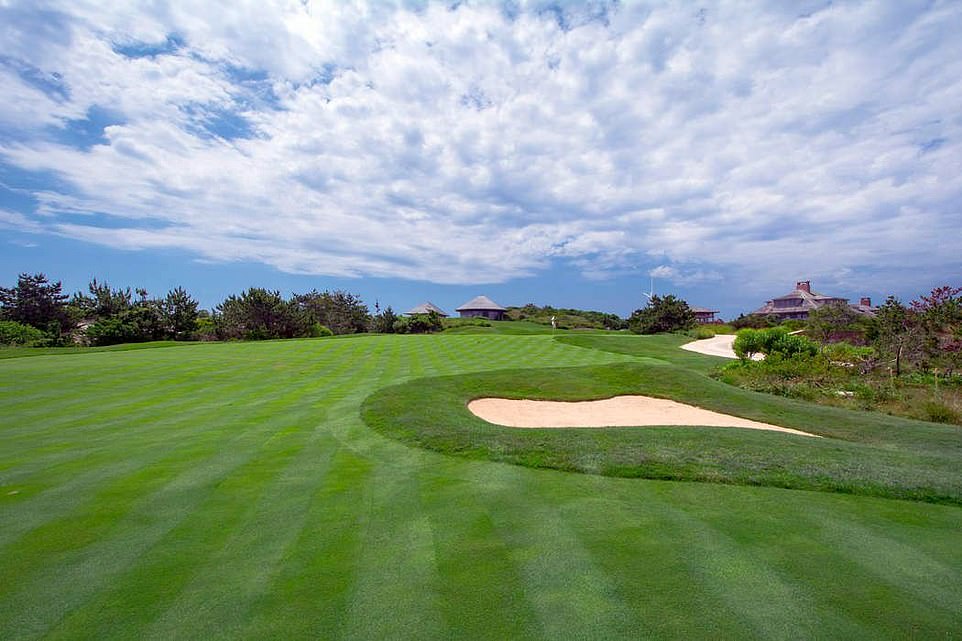 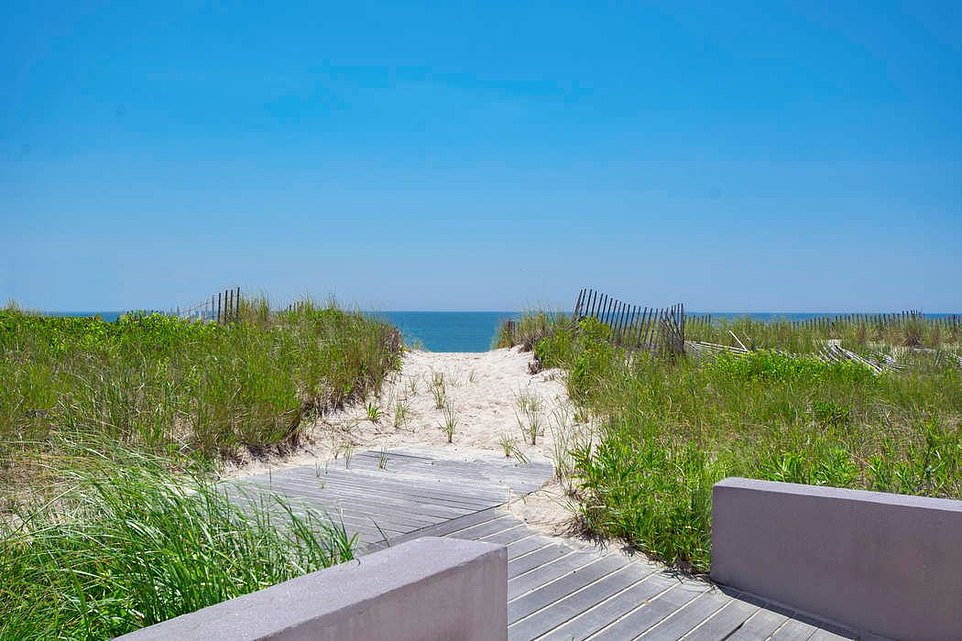 Beyoncé’s Stylist Breaks Down the Fashion in Black Is King

Not Everyone’s in Sweats as Online Sales Boost Versace, Michael Kors By Investing.com

Domestic firms driving economy, holidays at home and living under the tech radar

What’s Weakening the US Dollar?

“Black women are from the future”: Author says Black girls aren’t magic, but are...

Thursday briefing: Leaders knew stockpile could ‘blow up all of Beirut’...