Qualcomm (QCOM) continues to reascend atop the list of most globally relevant technology companies. Before 2020 began, QCOM already was proving they could leverage the existing 5G tailwinds and ramp up earnings growth. In 2020, Qualcomm finds itself benefiting from the COVID-19 pandemic as the virus acts as a catalyst for quickening the pace for adopting 5G technologies and devices.

This is my first article about a stock that I watched develop from inception during my many years living in San Diego. It was hard not to run into a Qualcomm employee at social gatherings during the company’s formative years. The San Diego Chargers played at its namesake stadium and newly minted Qualcomm millionaires zipped around town in flashy sports cars.

Now the Chargers have relocated to Los Angeles, while the aging Qualcomm stadium has become home to the Aztecs-San Diego State University’s football team. And Qualcomm, well, the company has become mature and for a large part of the last decade has been a market performer at best.

To be honest, I have basically ignored and even “disliked” the stock on my radio show over the last decade. The earnings growth at Qualcomm came to a dead standstill for many years as the space was commoditized.

Consider that for the past five years, earnings at the company have declined by an average of -7% per year. During that period, the stock went almost nowhere as it looked like a company that was destined to become what I call a “S-O-G-G-Y” (stodgy old growth giant of yesteryear). About all it ever had to offer was a dividend yield of around 2.5% along with zero growth.

But all of a sudden, the company has been revived with earnings expected to grow by 26% this year and an incredible 62% next year.

Estimates are ramping up as the company recently announced a multi-year licensing agreement with Huawei. Qualcomm now has multi-year agreements in place with all of the major handset manufacturers.

In addition, the analyst consensus is that QCOM is expected to grow earnings by 19.8% per year, on average over the next five years. This is superior growth for a mega-cap company the size of Qualcomm.

Description Of The Company… a Refresher For Some Of Us

Qualcomm is a wireless technology company positioned to capitalize as 5G technologies continue to be developed, launched, and adopted, with the latter being the primary factor driving the recent growth in 2020. Adoption rates soared in China in the Q3 for QCOM. Overall, the company expects 225M deliveries in fiscal 2020.

Qualcomm’s technologies and products are used in mobile devices, network equipment, consumer electronic devices, and other connected devices. They also are used in the automotive, computing, Internet of Things, and networking sectors.

The company recently launched Snapdragon XR2 5G platform—the world’s first XR platform to combine 5G with AI. This platform will allow users to experience unrivaled extended virtual reality with 360-degree views and 3D audio. The future is here, and Qualcomm is delivering it.

The company has grown up to be a sizable large cap with a current market cap of over $123.5B and annual sales of over $24B. I own it in my Growth & Income profile as it also sports a dividend. Because of this, I also own it in both my Dividend & Growth and Premier Growth portfolios. 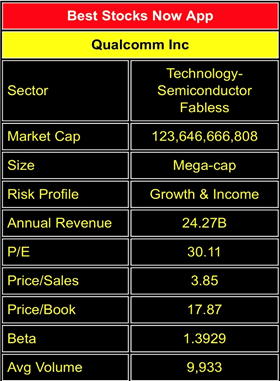 Last week, Qualcomm reported earnings that beat estimates by $0.15 per share. It also surpassed revenue estimates with sales coming in at $4.9B—$100M higher than expected.

The company announced a very lucrative patent dispute settlement with Huawei worth $1.8B, leading to the signing of a new long-term global license agreement with the controversial Chinese company.

Qualcomm also guided Q4 revenues and sales higher. The stock soared by 12% the day after this blowout news and analyst upgrades were soon to follow. Since then, Morgan Stanley has upped its short-term price target from $102 to $121 per share. KeyBanc and Raymond James also have raised their target prices to a similar level. Bernstein beat them all a few days later with a fresh, new $135 price target.

Unlike a majority of the street, I estimate five-year price targets. This combines the five-year growth estimates with current future earnings and a multiple, to determine a longer-term objective. More on my current target price in a bit.

My methodology for stock selection combines valuation with performance. I like to look backwards and forward at stocks that I’m considering for my portfolios. And I demand superior numbers in both halves of this equation.

The Performance Of The Company

Let’s begin by first looking at Qualcomm’s performance record over the years. As I mentioned earlier, Qualcomm went through many years of very little earnings growth, and when there was growth, it was choppy. This is reflected in the performance of the stock.

Annual performance of Qualcomm vs. the S&P 500: 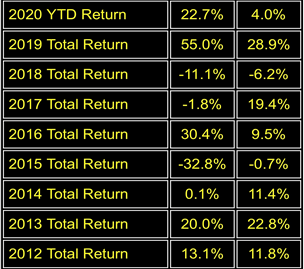 As you can see from the above graphic, Qualcomm has only delivered alpha in four of the last nine years. This is very spotty performance and it’s not necessarily a good indicator for the company to deliver alpha in the future.

However, given the equity market’s appetite for anything 5G and consumers adopting the technology at a brisker pace, I believe Qualcomm has several good years of alpha ahead of it.

In addition to past performance, I also like to look at a company’s one, three, five, and 10-year performances, against both the S&P 500 and the other 5,307 securities in my database. Here are what those numbers look like: 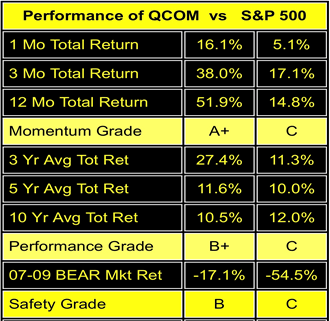 Qualcomm’s recent performance has made the long-term performance numbers look a lot better. Shares of the company have now beat the S&P 500 over the last one, three, five, and 10 years. Had you seen this graphic a few years ago, the performance did not look nearly as good as it does now.

You can see from these performance grades that Qualcomm’s prospects have improved dramatically over the past 12 months, shown through in the company’s recent earnings reports.

Also note from the above chart that QCOM did hold up fairly well during the Great Recession. Shares were down -17.1%, while the S&P 500 was down -54.5%. This trend has continued as many technology stocks are being adopted as the new defensive stocks of our day. Who can go without their mobile device, recession or no recession?

Qualcomm passes my performance criteria, especially in the momentum area. Now, we look ahead by checking out future expectations and valuation. As I mentioned earlier, the company’s earnings growth has been going backwards (declining) over the past five years.

Qualcomm is now expected to grow its earnings at an average annual rate of 19.8% per year over the next five years. This is quite a stunning turnaround. Once again, this is a superior number for a mega cap company. I have no interest in single-digit earnings growers. Stocks follow earnings—the bigger the better. 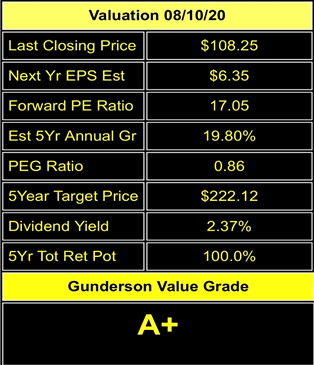 Currently, I consider Qualcomm to be one of the cheapest large-cap growth stocks in the entire market. As you can see from the above graphic, the stock is currently trading at a forward PE ratio of only 17, while the market (S&P 500) is trading at just over 22 times forward earnings.

It’s not easy to find good, quality tech stocks in this market that are still trading at a discount to their growth rate. Also consider that this potential growth comes with a current dividend yield of 2.4%. I would much rather accept a small dividend yield like this alongside earnings growth, as opposed to a dividend hog with a much larger dividend yield, but without much in the way of earnings growth. I like companies that offer an attractive total return potential when it comes to investing in dividend-paying stocks.

My current five-year target price for Qualcomm comes in at $200 per share. I have placed a 10% discount on my valuation to reflect the uncertainty in the market and potential supply/production delays due to COVID-19 outbreaks. 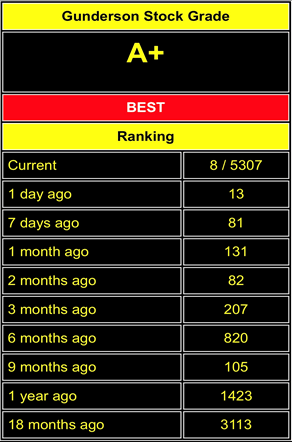 Once I have a company that meets both my stringent performance and valuation criteria, I like to look at the stock chart to determine a stock’s current health and ideal entry point.

As you can see from the below chart, Qualcomm gapped higher recently after the release of its recent earnings report and lucrative settlement with Huawei. The stock appears to have started a new leg up. I view any weakness in the shares as a buying opportunity for Qualcomm.

Qualcomm continues to gain the luster it enjoyed over a decade ago. After being a “market performer” at best, the shares have had a dramatic turnaround, positioned to benefit as the 5G infrastructure grows around the globe. Growth that’s speeding up at a much stronger pace than initially thought, with a higher need for connectivity in a COVID-19 world. I’m “very bullish” on Qualcomm and believe the company to be the cheapest pure 5G play in the market today.

You get daily “live” buys and sells, weekly in-depth market-timing newsletter, access to Bill’s proprietary database with daily rankings on over 5,300 securities, and a daily live radio show!

Disclosure: I am/we are long QCOM. I wrote this article myself, and it expresses my own opinions. I am not receiving compensation for it (other than from Seeking Alpha). I have no business relationship with any company whose stock is mentioned in this article.

FEMAIL tries out the warmest shoes on the market