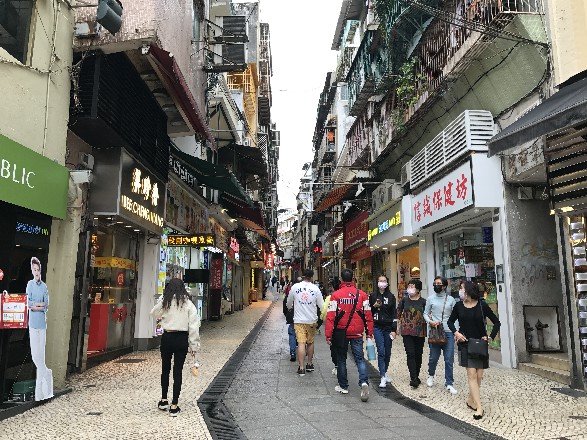 The tourism industry is abuzz following Monday’s news of travel restrictions being relaxed between Macau and mainland China, Wu Keng Kuong, president of the Travel Industry Council of Macau, told public broadcaster TDM.
On Monday, the Macau government said that starting today, applications for Macau travel permits would resume for Zhuhai residents.
Yesterday, it was announced that the general resumption of travel endorsements issued to mainland residents is set for September 23, just one week before the normally busy Golden Week of October.
Speaking on Monday, the industry council head made his comments solely on the basis of the Zhuhai resumption, and before news of the September 23 general opening was known.
Still, Wu said he was confident in the economy’s revival and an expected influx of tourists, particularly around the Golden Week holiday in early October. He expects that the relaxation of travel restrictions will improve the industry’s performance across the third quarter of this year.
Moreover, as the Hong Kong SAR is currently excluded from the policy, Wu predicts that should the situation remain as it is, tourism patterns will shift from Macau-Hong Kong tours to Macau-Zhuhai tours.
Meanwhile, the president of the Macau Junket Association, Kwok Chi Chong, told TDM that he estimates the business of mass gambling will improve following the news.
He pointed out that only 12% of gamblers in Macau were people from Guangdong, but gambling income would gradually increase in the near term.
Analyst Ben Lee, managing partner of IGamiX Management & Consulting, told Macau Daily Times yesterday that the timeline for tourism resumption had been “much more aggressive than I first thought.”
“Still, the pace of the recovery is a huge question mark right now,” with several factors at play, he said.
Among them is the ongoing trade war between the world’s two largest economies, which is held responsible for a 3.4% revenue decline in 2019.
“Gross gaming revenue was already trending down in 2019 and the reason for that was the trade war [between China and the U.S.],” said Lee. “Not only has that not been resolved, but it has escalated.”
Among the other factors that will influence gross gaming revenue in the remainder of 2020 are junket liquidity, the scale of Covid-19 testing and uncertain timelines regarding the processing time for travel endorsements, such as the Individual Visit Scheme. Daniel Beitler & Anthony Lam

How has the Herald changed in 190 years?

LG Electronics to step up development of 6G network technology

Ginger Hotels Debuts In Kochi With The Signing Of Two Hotels

How has the Herald changed in 190 years?

How Mauritius Became The Hottest Investment Opportunity On The Continent