Plenty of lift truck technologies are in play—so many that it can be daunting to pick the winners. Just a few include autonomous lift trucks, telematics and fleet software, virtual reality (VR) software, and digital cameras that integrate with truck forks.

One thing all these technologies have in common is the ability to improve labor efficiency. As a result, one can assess value by how much efficiency a technology can bring to an operation relative to its cost. Think of it as a sliding scale for lift truck technologies.

Few distribution centers are ready to acquire an entire fleet of autonomous trucks, but many can benefit from smaller investments like adding cameras or telematics to conventional vehicles, or perhaps going to full automation for some workflows, explains Jack Kaumo, director of iWarehouse solutions for Raymond Corp., a lift truck vendor.

“The overall theme we’re seeing right now is labor,” says Kaumo. “Labor is consistently a top concern because of the shortage of skilled operators and also retention of operators. That makes improving labor efficiencies fundamental.”

Lift truck suppliers offer a broad range of technologies, including telematics and fleet software, autonomous lift trucks, and other advancements like lithium ion (Li-ion) trucks. Another shift in the market is that vendors are now focusing more on solutions and systems, says Brian Markison, senior director of sales and marketing with lift truck provider Unicarriers Americas Corp.

“From the customer’s perspective, it’s more than buying iron now, because you’re putting in these vehicles as part of an overall process that is aimed at meeting some productivity improvement goals,” says Markison. “So, as a vendor, you must be able to provide products as part of a solution.”

Here is a look at few of the top lift truck technologies, with an eye to how they help make an operation more productive and safer. 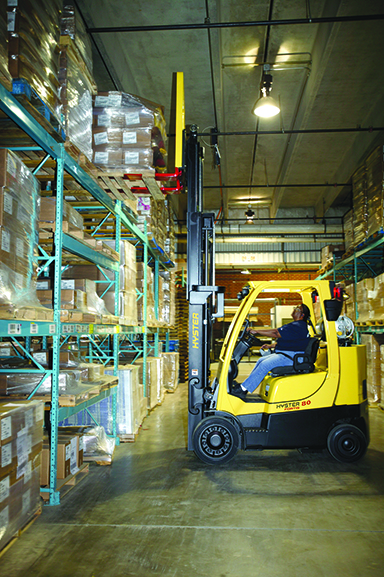 Unicarriers partners with Rocla to offer Rocla’s automatic guided vehicle (AGV) solutions to the Americas. These vehicles can autonomously lift loads. Unicarriers also has a partnership with Vecna Robotics, a provider of autonomous mobile robots (AMRs), though which Unicarriers manufactures and promotes their pallet jacks running Vecna’s Pivotal automation software.

Ultimately, it depends on customer needs as to what type of driverless lift trucks and applications will bring the most value, Markison says, but eliminating longer haul, repetitive moves, is a top consideration. “With autonomous vehicles, you take some of the pressure off your traditional vehicles and their operators, allowing them to focus on high-value tasks,” Markison says.

Paramore advises that autonomous lift trucks, tow tractors and other robotic vehicles typically don’t operate as fast or aggressively as a human operated equivalent does, which is why Yale figures it takes about 1.3 robotic lift trucks to replace the workload of one human-operated vehicle. However, with many DCs running multiple shifts, while struggling to find enough operators, robotic trucks can bring payback in as little as two years for a two-shift operation.

Additionally, says Paramore, robotics can pick a pallet off the floor level and onto a conveyor, as well as lift trucks capable of lifting pallets to higher positions in multi-level storage. In fact, says Paramore, because of the way robotic lift trucks instantly process sensor and camera data to govern movements, a robotic lift truck can begin to be just as efficient as a skilled reach truck operator when handling pallets more than three positions high, and even faster than most human operators at higher levels.

Paramore agrees, however, that robotic trucks and tow tractors are well matched to longer horizontal moves, or tasks like hauling and returning waste bins. In a more manual lift truck fleet, such repetitive duties eat up considerable operator time, which can influence employee burnout. “The X that we’re often trying to solve with robotics is helping our customers reduce employee churn and all the costs associated with that like training,” says Paramore.

Fully automated trucks are ideal for tasks that involve repetitive movements, agrees Raymond’s Kaumo, such as inbounding processes, or shuttling non-conveyables. Today, if done with conventional trucks or tuggers, such workflows eat up a lot of labor capacity with what Kaumo calls “windshield time.” Raymond also offers an automated stacker truck for moving loads from floor to conveyor.

On the other hand, Kaumo says, some DCs or workflows might not yet call for full automation, but could benefit from partial automation using Raymond’s zoning and positioning, or “ZaP” technology. This technology uses some guidance infrastructure to transmit instructions to compatible trucks, overriding manual controls to allow for precision guidance. With ZaP guidance, the most efficient paths are always taken, says Kaumo. “It’s a semi-automated path to start seeing some of the benefits of automation,” he says.

Lift truck provider Crown Equipment offers autonomous trucks such as a tow tractor that is capable of switching into manual mode when needed, according to Andy Smith, director of marketing product management for Crown.

“What we are hearing from our customers is a growing need for these dual-mode type of lift trucks,” says Smith. “Manual operation makes it easy to manually move vehicles to accommodate dynamic changes in the production plan, retrieve vehicles from the floor, move them into storage, deliver them for maintenance, or use them in unique situations without the need for specialized operator training.”

“This [software] uses actual data, based on what workers are doing right now, and develops goals and metrics from that,” Kaumo says. 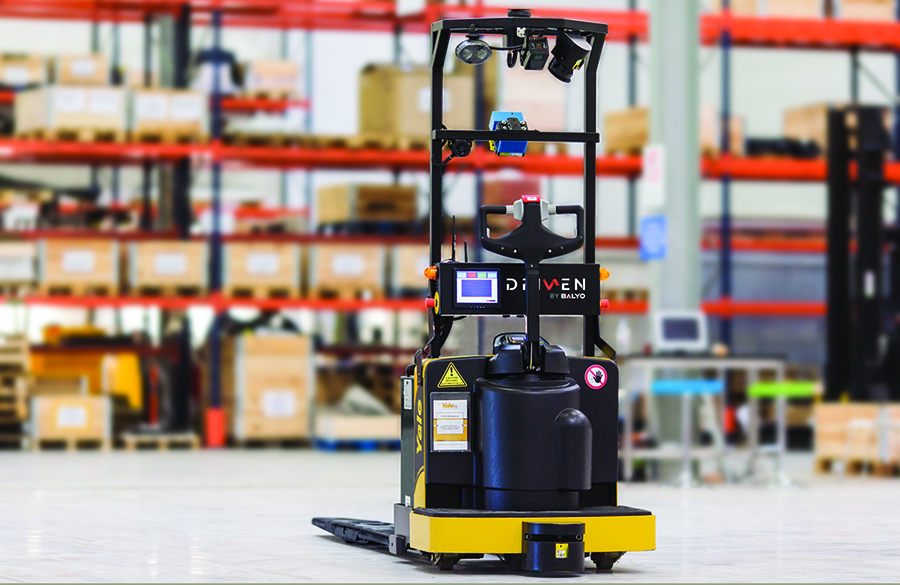 Not only can labor management be used by supervisors to see which workers are the top performers and which are slipping below goal, it also provides valuable insight on what it costs a DC to serve its customers, and can also be used for labor planning and forecasting, says Kaumo.

Fleet software and telematics are another way to ensure operations stay productive, notes Paramore. Managers can see analytics in the software on trends such as working time spent moving or lifting, or time spent with the key in the “on” position. The software also digitizes pre-shift checklists and lets managers see trends on checklist failures.

Fleet software can also facilitate updating checklists to ensure vehicles are being properly sanitized between shifts, and the software and telematics allow for access control so unauthorized users can’t hop on and use a vehicle. “In this time of Covid-19 challenges, checklists can be updated to reinforce and remind operators of the importance of following sanitation or protective mask standards, while with access control have digital control and traceability over who is using each vehicle,” says Paramore.

In this era of social distancing, the pre-shift digital checklist function is definitely being tweaked to add questions about sanitation and use of protective gear, agrees Mark Stanton, general manager for PowerFleet, a provider of telematics and fleet management software. Additionally, says Stanton, telematics provides for access control and a digital record of who has used each vehicle and when, which also supports health protection practices.

“With a system like ours, you know exactly what equipment an operator touched, when it was touched, and over what period of time,” says Stanton. “So [telematics] can give you a great deal more control and insight over chain of custody for your assets.”

Another software tool is VR. Not only can VR training speed up the onboarding, it can expand the skill set of existing operators, says Kaumo, or teach a new workflow, like how to move loads for hand-off to newly deployed automation. “There can be a module created in the VR system [to teach a new workflow] and the operator can hop on a truck, put it in virtual mode, and learn how to do it without actually moving the truck,” he says.

Telematics makes extensive use of sensors, but some vendors are also adding additional sensing to provide real-time locationing over where workers are, or assets like pallets. Powerfleet is exploring new types of location-based services that make use of technology such as ultrawideband (UWB) and Bluetooth Low Energy (BLE), says Stanton. PowerFleet’s acquisition last fall of Pointer Telocation provides PowerFleet with additional locationing tech, he adds.

For users, real-time knowledge of the location over lift trucks, warehouse associates, or other tracked objects like returnable containers will allow for better congestion management, says Stanton. As he explains, “we can have a great deal more views and appreciation of how the industrial engineering aspects of a facility are actually doing, like whether trucks are taking the optimum routes. We can develop heat maps for an operation and avoid bottlenecks.”

Digital cameras can be considered another form of sensing. For example, multiple vendors offer fork-mounted cameras to guide fork placement. These cameras can integrate with the vehicle’s display screen so operators can see where forks are positioned when handling loads that might be up several levels. Kaumo likens integrated fork-view cameras to the cameras now being used on cars and light trucks so consumers can do things like back up safely, or with some vehicles, automatically backup a trailer. Kaumo says that with Raymond’s fork camera option, there is a laser in the camera that enables the operator to see where the center of a pallet is.

Fork-mounted camera systems address two key goals of lift truck operations—enhanced productivity and safety, says Thieme Wels, content marketer with Stoneridge-Orlaco, a vendor that provides the systems. They also keep operators from having to crane their necks to try to see where the forks are.

A new feature for Yale is a pair of digital cameras integrated with a vehicle’s telematics impact sensor. When an impact occurs, a mobile app feature presents users with a video clip that shows 3 minutes prior to the impact and 3 minutes after. “You get a visual record of what happened, and enhanced accountability,” says Paramore.

The integrated camera setup from Yale can also be used to capture video footage on demand to visually document situations the operator sees in the DC that merit review, or to take a still image of a load or pallet as it’s being placed for loading or transfer. “The camera provides another layer of accountability when it comes to the condition of goods being transferred to partners,” says Paramore.

All of these tech innovations, from autonomous trucks to new features in fleet software, cameras, or Li-ion powered units, boil down to easing customer concerns around productivity, safety and employee turnover. “All of these technologies are about making the customers life easier and operationally pain free,” says Paramore. “If we’re doing something with technology that does not align with the objective, we’re doing something wrong.”

Companies mentioned in this article:

Uzbekistan to reform its automotive industry to boost production

As Microsoft pushes partner transformation, a state of ‘channel inertia’ is...