Due to weak sales figures, the Three-Pointed Star discontinued the production run of their luxury pickup truck. Back in 2019, only 15,300 units of the X-Class were sold worldwide, which is rather pitiful. For comparison’s sake, over 9,500 copies of the German automaker’s GLE-Class SUVs were purchased during the first half of 2020 on the U.S. market alone.

To be fair, calling it a ‘luxury’ pickup might’ve been a little exaggerated. Daimler’s ill-fated creature was extensively criticized for its lackluster performance, as well as the ample use of second-rate materials throughout its cabin. All things considered, it’s no wonder Stuttgart’s auto giant decided to give X-Class the axe. I mean, if you’re seeking to cut costs, it only makes sense that you’ll probably want to pull the plug on some underperformers, right?

Let’s take a minute to remind ourselves of the pickup’s main characteristics. For instance, the range-topping X350d variant is powered by a turbodiesel 3.0-liter V6 engine that’ll gladly generate up to 255 hp at 3,400 rpm. Between 1,400 and 3,200 revs, a respectable torque output of 405 pound-feet (550 Nm) will be achieved. A seven-speed automatic gearbox enables this power to reach a 4Matic all-wheel-drive system. 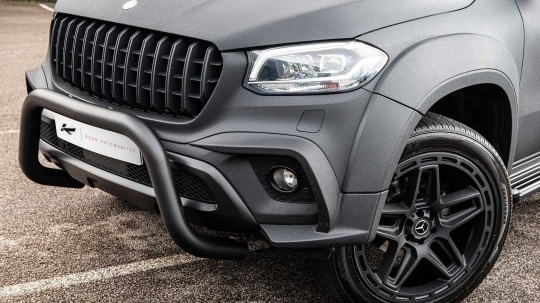 Depending on the trim, the X-Class X350d comes equipped with either 18- or 19-inch alloy wheels. Each and every one of these hoops wear ventilated brake rotors, measuring 320 mm (12.6 inches) up front and 308 mm (12.13 inches) at the rear. Suspension duties are taken care of by a double wishbone unit with coil springs at the front, accompanied by a multi-link setup on the opposite end.

On the other hand, the entry-level X220d model in Merc’s lineup is where the whole state of affairs really starts to sound puny. This piece of German machinery is put in motion by a 2.3-liter turbodiesel inline-four that hands its force over to a rear-wheel-drive (4Matic is optional) by means of a six-speed manual transmission. At around 3,750 rpm, the mill is capable of producing up to 160 ponies, along with 297 pound-feet (403 Nm) of twist at 1,500 rpm.

Now, while most of us might be inclined to forget about this entity’s existence, the folks over at Kahn Automobiles were more than happy to work their custom magic on Daimler’s unfortunate pickup truck. Ever since the company’s birth in 1998, these Brits have been modifying and distributing one-off machines of all shapes and sizes. I’ll tell you what, let’s proceed with a closer examination of their sinister X-Class undertaking.

Look, if you were expecting any sort of performance upgrades, I’ll have to disappoint you; there aren’t any. The Kahn crew focused solely on the visual side of things, but we’ll have to admit their tweaks are actually pretty damn sweet, if you ask me. 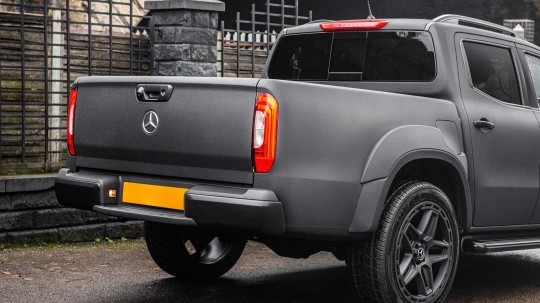 For starters, we notice a robust ram bar that brings about a healthy dose of extra muscle. It is accompanied by a new grille, featuring a splendid vertical strake design. Sure enough, these modules will certainly let others know this isn’t your ordinary X-Class.

On the sides, they installed enlarged fender flares and revised side skirts, joined by a set of colossal 22-inch alloy wheels. The entire thing was enveloped in a brutal satin black paintwork with a 3D-textured finish.

As you step inside the cabin, you will find neatly upholstered quilted leather, complemented by red accents. Furthermore, Kahn treated the interior to contrasting stitching that stands out against the black leather. However, the most notable components of the bunch are, by far, the optional bulletproof windows.

A while back, this rugged monstrosity was sold for an eye-watering £63,999 ($83,051 at current exchange rates). Personally, I’d say that price tag is a little ridiculous, considering that we’re talking about a discontinued vehicle here.

What do you think?