John Lewis has released a ‘trendy’ capsule range in a bid to attract ‘woke’ shoppers amid an ongoing sales slump.

The high end department store has launched the Style With Purpose campaign, which mixes pieces from John Lewis brands alongside labels it stocks including Mulberry and Hush.

John Lewis ditched models for the campaign, instead opting to recruit influencers with thousands of online followers to model the clothing, and promised 15 per cent of the profits to charity.

Celebrity stylist and fashion expert Rochelle White said the move may have been to bring in more ‘socially conscious’ shoppers, explaining: ‘John Lewis may be looking to attract more “woke”, customers with the campaign. Since the coronavirus pandemic, many shoppers are much more wary of their shopping and spending habits and are trying to educate themselves on how companies are behaving.

‘The Black Lives Matter movement may have also had an impact on their choice of influencers as models, with some customers calling out retailers online to become “more diverse”.’

It comes after the high street retailer was hammered by the coronavirus lockdown, announcing last month that its flagship £35million store in Birmingham will never reopen after closing during lockdown, while eight retail sites announced in July as at risk of closure, also including the Watford store, will close permanently. 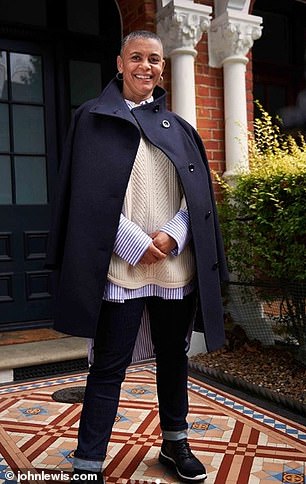 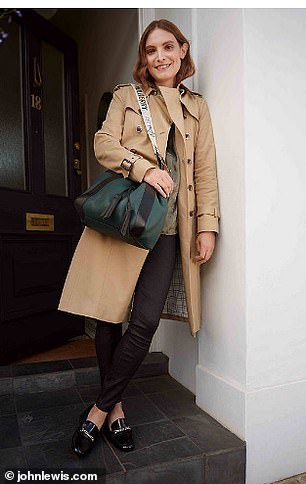 John Lewis has released a ‘trendy’ capsule range in a bid to attract ‘woke’ shoppers amid ongoing sales slump, with 15 per cent of proceeds from the collection going to charity

Rochelle explained that the choices, such as partnering with a charity, may have been a savvy move for the retail giant.

She said: ‘Shoppers love brands that do good, have good ethics and values. I think this has been a growing trend since the start of the year and enhanced since lockdown.

‘Choosing to partner with a charity and one aimed at women is a good move.

‘A few brands have done this since lockdown and it has been a great way to build brand awareness and support a cause that is relevant to their customers and could be quite personal to them.’ 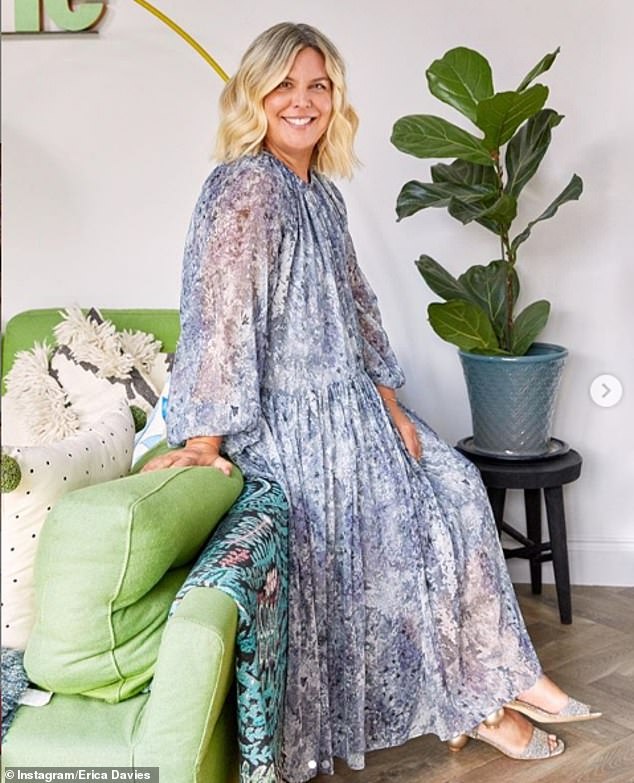 Influencer Erica Davies, who has over 150,000 followers on Instagram, edited the capsule collection for the retailer

Meanwhile she also said bringing influencers with thousands of followers on board was also a good business decision, adding: ‘This is a great move because influencers are becoming more recognisable and even household names in some cases.

‘Having real women I feel makes the brand more appealing and approachable. It shows what items would look like on real women and bodies of all shapes, sizes and ethnicities.’

She added: ‘This is the sort of thing that shoppers of all ages relate too with many younger brands using this approach which huge success and could be the start of something big for John Lewis.’

The retailer worked with influencer Erica Davies on the edit, who has over 150,000 followers on Instagram. 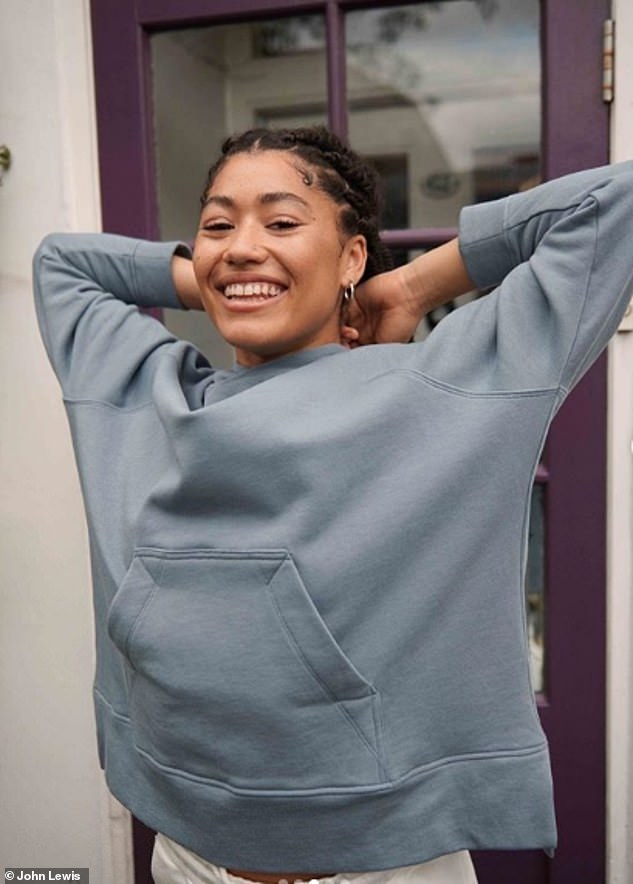 Pieces in the range include a £59 Kin Raglan hoodie, a £99 leopard print dress and a trench coat from Hobbs with a price tag of £249.

Other items included are a £215 multi-coloured cardigan as well as a leather jacket from All Saints costing £298 and £32 bed socks.

Sharing her excitement about the collection online, she wrote: ‘For me, style should be a celebration of who you are as a person – a way for you to show the world exactly who you are.

‘Rather than simply share their new autumn collections – and as a response to the world we have inhabited over the past six months – John Lewis & Partners wanted to find a way to bring kindness, community and fashion together. 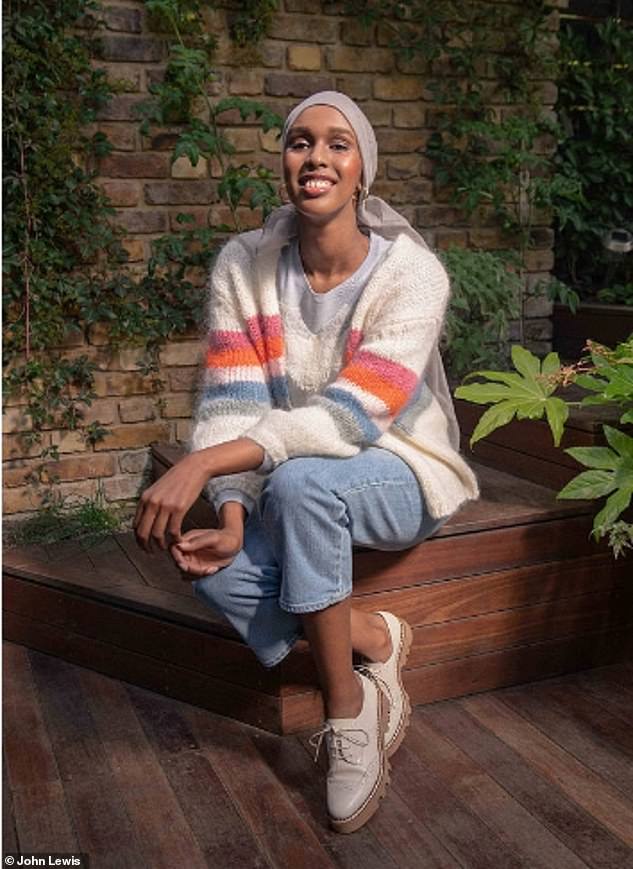 Stylist Rochelle White said the decisions may have been made to attract a more ‘socially conscious’ shopper (pictured, one model wearing a £215 cardigan)

‘They asked me to curate a capsule collection of their autumn pieces – which I wanted to make sure weren’t just stylish, but useful too.

‘I’ve included a mix of classic clothes and more statement pieces – that will mix easily with things you might already own and help create outfits you’ll wear for years.

‘I worked with the team on the casting for the initiative imagery – and travelled on location to style on doorsteps and in homes – all with mask and sanitiser, of course!’

Calling the campaign confidence-boosting, she added: ‘After such a strange year the question is: what does fashion mean now? We know that the ‘new season’ will mean something different to us all.’ 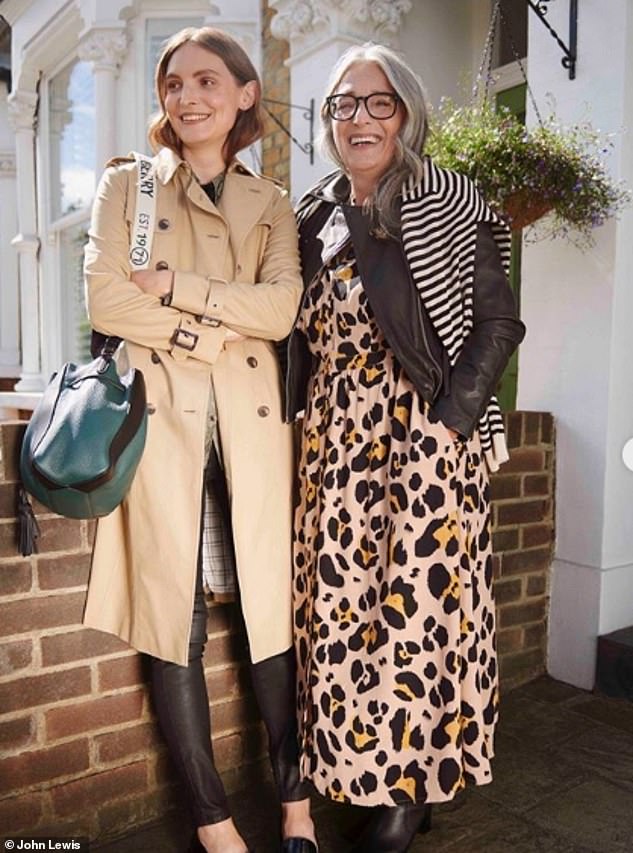 Rochelle added that the motivation behind the choices, such as partnering with a charity, may have been a savvy move for the retail giant

The new launch comes after a challenging few months for John Lewis amid the ongoing crisis on the high street following the coronavirus lockdown.

Last month, the high-end brand confirmed 1,300 roles would be affected overall as all eight retail sites announced in July as at risk of closure, also including the Watford store, will close permanently.

The retailer said the affected stores were ‘already financially challenged prior to the pandemic and a number of contributing factors, including the shift towards online shopping which Covid-19 has accelerated, meant these shops would not be commercially viable in the future’.

John Lewis was struggling before the pandemic shut down their department stores and supermarkets. 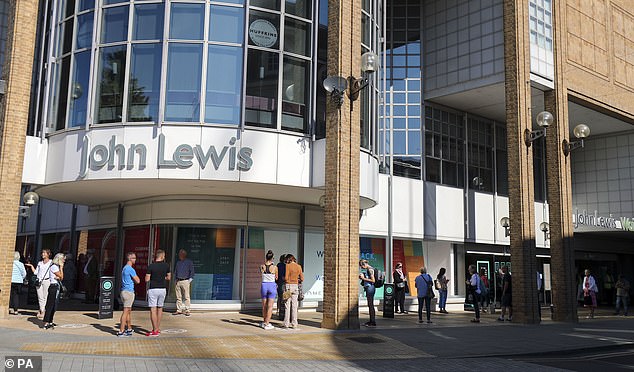 In March profits slumped by 23 per cent to £123million and the bonus paid to staff since 1953 was dropped to two per cent of salary – the lowest for more than 60 years.

Analysts have warned the grim news is the tip of the iceberg, because the full effects of lockdown have so far been masked by the government’s massive support schemes.

Figures showed that 9.6million jobs have been furloughed, with the Treasury paying out £33.8billion in subisidies.

Dandies rebelled against social, gender and fashion norms for 200 years. Some say time is ripe for a revival

Editors’ Picks: A self-care booster pack for the skin, body, and mind