As the 2021 Jakarta Fashion Week 2021 starts on Thursday, there has been heightened excitement this past week about how the fashion people will portray this year’s zeitgeist and their predictions for the trends next year.

Loungewear and activewear will still dominate the runways as people are still gripped in the virus clampdown, but a bit of creativity from the designers will allow fashion-conscious people to dress up at home.

Award-winning international designer Wilsen Willim offers 18 looks in his collection, which blends pajamas with formal wear that will just go right for those working at and from home, feeling comfortable and stylish at the same time.

“The design reflects hope for the current situation ending for the better, as well as adjustment to the new normal,” he said on Tuesday about his collection to be showcased on Senayan City-sponsored runway show named de.co.rum.

During the virtual press conference, Senayan City senior manager Fenni Rosalina said the show would visualize how the designers reflected on the global pandemic.

“The collections are the visualization of the good things about this current situation and a showcase of borderless creativity,” she said, adding that the shopping mall invited two of its tenants, Iwan Tirta Private Collection and the Masari fashion store, as well as designer Amot Syamsuri Muda to join the second show on Friday. 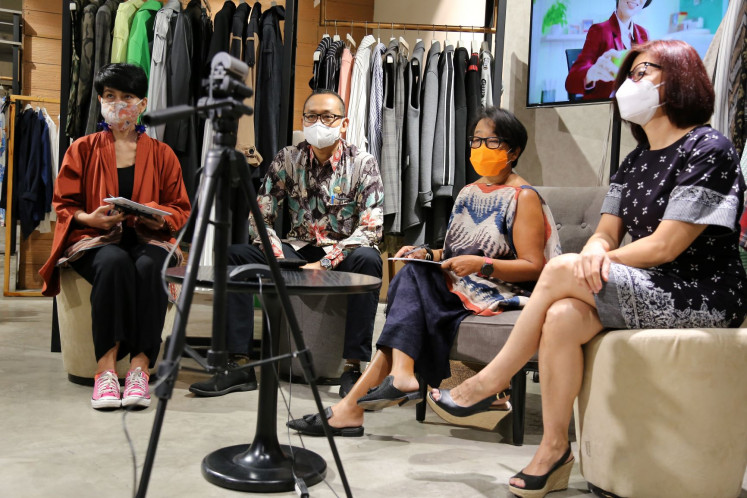 Amot, with his eponymous label AMOTSYAMSURIMUDA, will release his summer/spring 2021 collection “Terang” (Radiant) all of which is made out of textile scraps in various shades of white.

“I liberated myself in creating the collection. Thanks to the pandemic, we could take a break and use the time to design for ourselves,” he said.

He has applied the “borderless creativity” concept by juxtaposing the iconic fashion styles of different eras in one look, such as the baggy style of the 90s for bottoms paired with futuristic tops.

High-end boutique Masari will bring the collections of South Korean brands, including those of Seoul-based Andersson Bell, whose items have been sported by K-pop idols BTS and Blackpink that have seen purchases shoot up overseas by their colossal fanbase Armys and Blinks.

Under the main theme “Inspiring Creativism”, the fashion week will run until Nov. 29, presenting 60 designers in 16 shows to be aired online through jfw.tv and the websites of the collaborating partners.

The pandemic-related situation was also influential for the designers who will take the Indonesian Fashion Forward show, the last show on Friday.

Ria Sarwono and Carline Darjanto of COTTONINK has worked together with visual artist and singer Abenk Alter to create a “wearable art” collection themed “Self Love” bearing paintings of a self-hugging woman in bold colors.

Jenahara will release a collection of uniform style designs, all in plaid motifs, as she has been inspired by the looks in the TV series she binge-watched while being stuck at home, from Gossip Girl to The Umbrella Academy.

SOE Jakarta creative director Monique Soeriaatmadja has recreated activewear by combining textiles with the brand’s signature handwoven fabrics using natural dyes, while Hattaco’s designer Rani Hatta picked “Battlefield” as the theme for her collection of combat looks, which focuses on the utilities of an attire to carry everything needed to fight off the coronavirus. (ste)

Your premium period will expire in 0 day(s)

Dandies rebelled against social, gender and fashion norms for 200 years. Some say time is ripe for a revival