Jari Jones grew up in a family home. No, not a 2.5-kids-and-a-dog cul-de-sac household lined with a white picket fence. Jones’ multi-floor New Jersey childhood abode boasted uncles, aunts and cousins. Growing up, her relatives were some of her best friends, meaning there was no need to bring classmates home from school. Jari was raised, and protected, by a village of family members. And at the head of this village was her great-grandmother.

“Dorothy Jones don’t play,” Jari laughs over FaceTime, while headed back to New York City after a weekend upstate. “When she had the last word, everybody just shut up.” And though Jari now has a somewhat smaller household in Queens, it’s little wonder that she is building quite the family of her own. 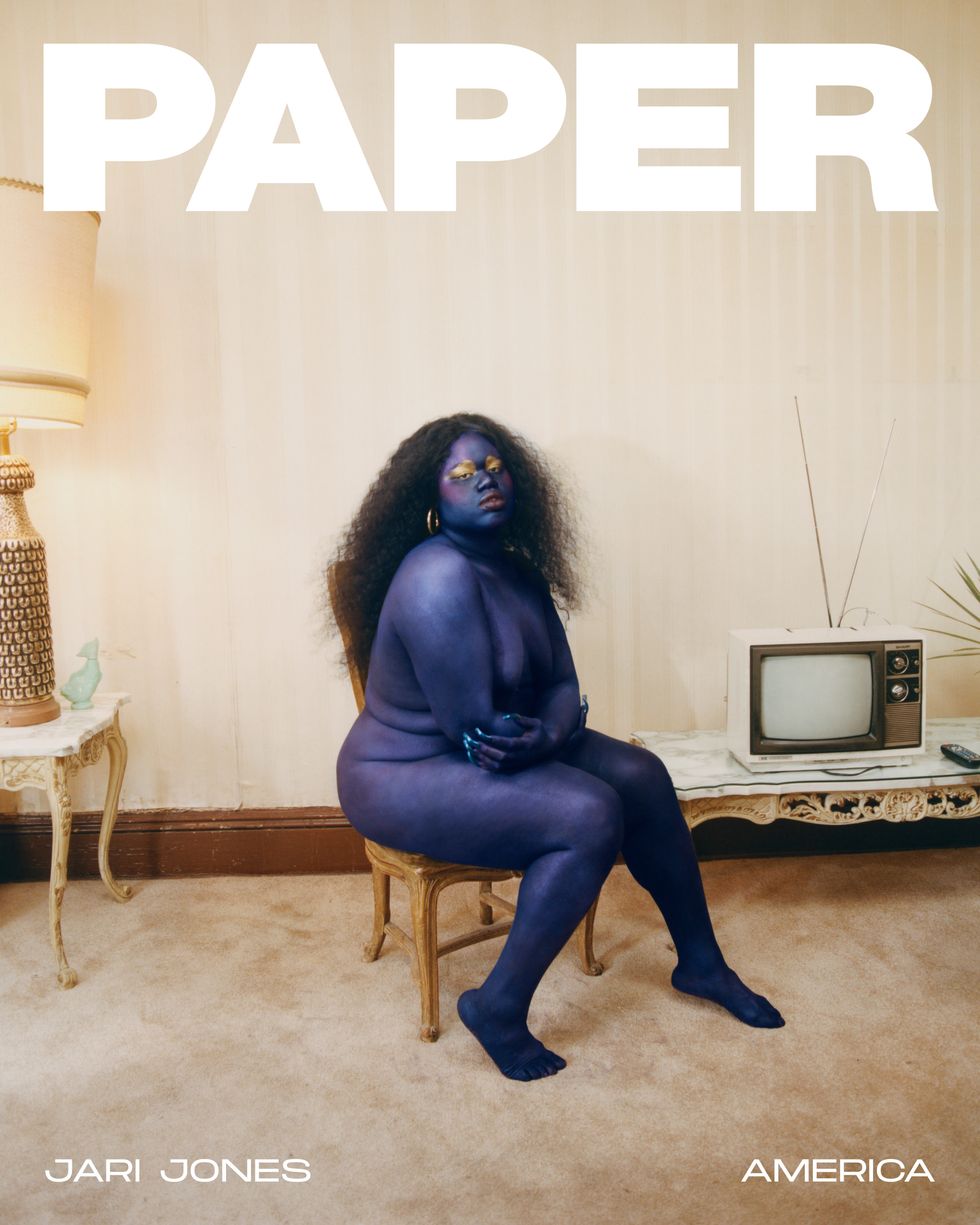 Jari is known variously as a writer, actor, activist, speaker or model. In the summer of 2019, she made history on the Cannes Film Festival red carpet where, dressed in a red Cisum Couture gown and a crown of locs, she became the first Black trans woman to produce a film competing at the festival. This summer she followed that up with an equally splashy moment as a face of Calvin Klein’s global Pride campaign, a deal that resulted in her photo being plastered across a giant billboard in Soho. But throughout it all, Jones has been a mother.

“When we consider my kids, it’s the queer youth that have gravitated towards me over the years,” Jari explains. She spoke of them lovingly in a video that was part of her Calvin contract. “I have been involved in many fields, so I started college doing musical theater and stuff like that. The shows I was doing with young people, some would say like ‘Oh my god, you’re what I want to be’ or ‘You’re what I’m trying to go towards.’ That’s kind of how I adopted some of my children.” But it grew from there.

Jones did log time in musical theater — she says acting is her true passion — but also at the LGBT Center. As a partial result, she’s also often found herself close to the center of queer and trans culture in New York City. And it’s there that her children have found her, extending an ever-growing family.

“My kids call me when they’re in some hot shit, or my kids call me when they need somewhere to crash for the night, they need $1 in their pocket,” Jones explains of the dynamic. “If I can provide that, I’ll try my best to do that. I want to get them to a place or provide them with opportunities where they can have their own. So when they do want to integrate back into their biological families or back into a different kind of workplace, they’re confident and they’re not doing anything out of disparity.”

“My dream is to bust down all the windows, bust down all the doors and then just quietly walk away. I want to let the people who dream about this and who share the same identities as me really do it and do it as a high caliber.”

The concept of chosen family isn’t new — it has a long history within queer culture specifically. Given the ways in which this country has cultivated systems of homophobia, misogyny, transphobia, femmephobia, racism and other forms of oppression, queer and trans folks (particularly those of color) have often been left with only one another for support. They’ve been marginalized not only in the professional marketplace, but sometimes within their biological families as well. In a bid to cope they have built drag families, ballroom houses and the Deep South’s rainbow families to pool resources and exchange knowledge. Jones, especially as a Black trans woman, falls squarely within that lineage. Although she has a bit of an empty nest at the moment.

“My immediate kids are all in the college atmosphere right now,” she says. “I have a son who’s been in Colombia for the last two years, and the other ones are in Pittsburgh going to school and Michigan.” And while they still all remain connected, these days getting together for dinners, holidays and the like has been fewer and far-er between.

Jones’ mothership was modeled for her by her biological mother and other Black women in her family. Those women protected her as a child as she found her way. Described as an effeminate child, playing with Barbies or jumping rope, Jones says the family thought “it was cute when I was younger.” But at a certain age, a few family members began to try to police Jari’s mannerisms.

“My mom was always very vocal,” she recalls. Jari would come out as gay, and then in college would come out as nonbinary, before coming out as trans shortly after — coming out multiple times is not uncommon for trans folks. “She was my protector if people got out of line.” And so was Dorothy Jones. “She was like, ‘She is who the hell she is, everybody shut the hell up. Period.'” It’s that spirit of directness, love and protectiveness that Jari carries with her.

All of this — that spirit, as well as the professional contexts in which she has placed herself in — has fashioned Jari into both a mother and midwife of not only this moment but the next. To that point, the creative works hard to ensure that she has an input on how she shows up in her jobs.

“I don’t want to [model] for long,” she says. “My dream is to bust down all the windows, bust down all the doors and then just quietly walk away. I want to let the people who dream about this and who share the same identities as me really do it and do it as a high caliber.” So when she walks onto set, she wants to make sure that her identity is apparent, and that she has a voice. This has led to projects with companies like Dove, Nike, and Calvin, many of which included Jari speaking about her experiences. But this also pertains to the visuals themselves: Jari says that instead of wearing a “big, curly, very biracial, racially ambiguous” wig, in her Calvin spread shot by Ryan McGinley, she advocated for locs, which are more affiliated with Black folks.

It’s not just herself she’s looking out for. With the Cannes film Port Authority, it was important for Jari to attend the festival not only to walk the carpet (and do so, again wearing locs) as a point of representation but to look out for and protect the cast that was also attending — in addition to being a producer, and a part of the cast, she had functioned as lead Leyna Bloom’s acting coach for the production.

“My community is like my family,” she explains. So when the idea came up that the ballroom members of the cast should vogue on the red carpet, Jari wanted to make sure it was executed properly. “You have a lot of these new actors and models or people coming into the industry just so excited to be there to be present, but don’t know the dark sides of it as well. So I decided, ‘I’m going to be that person to make sure that you’re not being hustled or being fucked. [With Cannes], I knew that these white folks were going to be excited by these Black and brown boys going to fuck off in the party,” she says. “And I also know how they’re going to try to consume them as well. So I was like, if y’all want to do it, y’all want to do it, but nobody’s gonna make you. Don’t think you have to perform for people. Like, if you feel in the moment, then feel the moment and you know, just there to really be that kind of protection, while also doing the damn thing on the red carpet.”

“You have a lot of these new actors and models or people coming into the industry who don’t know the dark sides of it. So I decided, I’m going to be that person to make sure that you’re not being hustled.”

It’s a role that Jones has played before, stepping through a door and into an opportunity and then holding it open to ensure that those who come after her do so safely and on their terms. The aim is to challenge those same American systems of homophobia, misogyny, transphobia, femmephobia and racism. But in the end, it’s America itself that’s the problem.

The concept of patriotism for a nation built on all the aforementioned forms of oppression and more “freaks me out,” Jari says. To her some symbols of America are “bone-shaking.” And that’s not a feeling she carries alone; Pyer Moss founder and Reebok Global Creative Director Kerby Jean-Raymond once built a series of shows, in-part, around the idea that Black folks are othered within this country. In an interview with Fashionista, Jean-Raymond said it “hurt” to see someone wearing a full-on American flag outfit. An in famous Toni Morrison quote says simply “In this country white is default. Everybody else has to hyphenate.” For Jari, the racism, classism and elitism is ingrained so deeply within this nation, that she has no interest in ideating how to create a “better” version.

“I’m more interested in the dismantling of it,” she says. “How can we break this down and build something that’s going to be sustainable for everyone? And that sounds so cliche, but that’s what I’m looking at. When I think about an America or a better society, I want something that’s going to be so far from what we’re used to, even if it’s the good that we’re used to. Because even the good is rooted in some fascism. I’m thinking Afro-futuristic. I’m thinking something that we can’t even believe can happen. And I don’t know what that is, I don’t have the answers for that. Who can imagine a world right now without prison, without a president, where people can come together and create communities and run communities? We can’t even think that far. But I know that I want, or that’s something I want to head toward.”

From the start, 2020 has felt like a pivotal turning point for America. Ahead of what could be the most consequential election in our lifetimes, many of us are starting to re-think our behaviors, question old assumptions and challenge longstanding institutions. Through it all, there are plenty of reasons to feel inspired.

Highlighting compelling people in pop culture, politics and the arts, PAPER will examine America in all of its splendor, grit and complexity, and search for the stories that give us hope, compel us to be better versions of ourselves and to understand America as the multi-faceted, dynamic place — and idea — that it is.

Talisman Fine Jewelry, a Minimal and Wearable Collection of Art

‘Everyone’s got bills to pay’: facing up to end of furlough...