What I’d like to do right now is go to Arundel and buy a lemon yum yum from the LG Café in the town centre, which snobbish locals are trying to close.

I’d like to drink to the health and wealth of the café owners with one of their cups of piping hot chocolate and tell them not to let the burghers grind them down.

I’d like to toast their muffins and curse those who would pan their cakes for no other reason than freshly baked, cherry-topped, hard-glazed snobbery.

George Johnson, 43, and his partner Lily Trunfull, 29, have run the cafe and cake shop for two years.

My goodness, what a success they have made of it — home-baked cakes with attitude, sold in a wildly Instagrammable, flower-filled café, complete with funky, friendly staff. 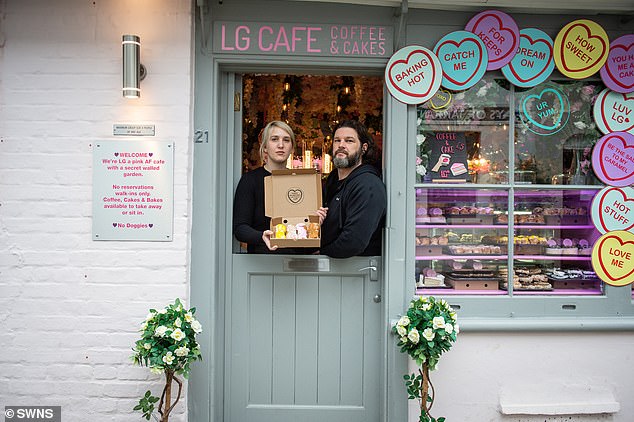 What I’d like to do right now is go to Arundel and buy a lemon yum yum from the LG Café in the town centre, which snobbish locals are trying to close, writes JAN MOIR

It seems to be the kind of establishment where young, fashionable customers find it important to pose with their cake and take a picture of it rather than merely eat it; to have their cake and greet it, if you like.

I have given up trying to understand the youth and their insatiable desire to post every breath they take and every cake they don’t bake to social media.

However, George and Lily grasp it all perfectly.

They have cleverly filled a gap in the market with glitter-sprinkled fresh cream confections; they have piped the custard of victory into their sugared doughnuts of desire.

Through sheer hard work, talent and effort, their business has done well.

Their mad bakes and cake mash-ups, such as Milky Bar Kid Yum Yums and Jammy Dodger Cupcakes, are a hit with many local customers as well as visitors who come to the picturesque Sussex town to visit the castle, cathedral and other attractions. 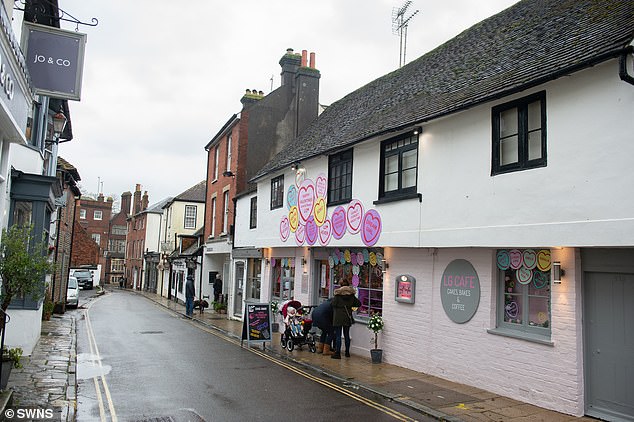 In fact, the LG Café, with its giant pink ribbon tied around the building, is so successful it has become a local attraction in itself. Yet not everyone is pleased.

Some of the more toffee-nosed locals are not amused by this toffee-doused enterprise.

A terrible and sly campaign has been launched against the LG Café, a poison-pen offensive online and by letter that has plagued the owners for months. Recently, it has become intolerable.

Lily told newspapers: ‘At first it was just a few snide comments here and there, like ‘who brought the rats into the town — oh, it’s that cake shop’.’

She added that it was a ‘small, vicious group of locals and local businesses that nip away online and now they’ve got their teeth into it’. 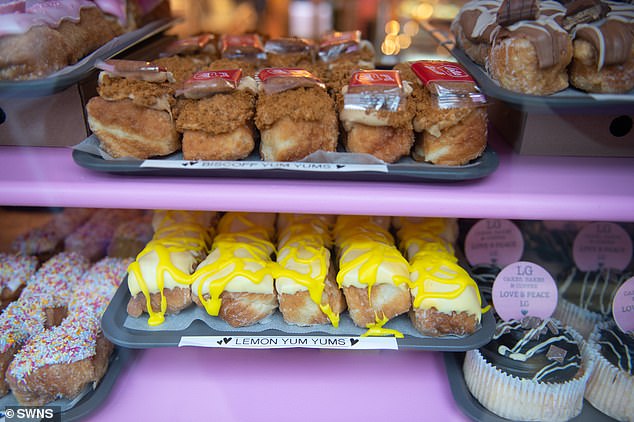 In fact, the LG Café, with its giant pink ribbon tied around the building, is so successful it has become a local attraction in itself. Yet not everyone is pleased. Some of the more toffee-nosed locals are not amused by this toffee-doused enterprise

Anonymous postings have described the café customers as ‘maskless, scantily clad chavs’ and not ‘decent people’ like them.

Depressingly, Hyacinth Bucket appears to be alive, well and flourishing in the middle of this handsome South Downs market town.

Meanwhile, some social media posts have complained that the café does not adhere to Covid policies — but the couple are now operating the LG as a ‘cakeaway’ in accordance with lockdown measures, and are serving their baked goods through a hatch.

One cannot help but suspect that here, as in so many other recent instances, black-hearted malignants are weaponising Covid complaints, using them as a mask for some deeper grievance, determined to cause maximum harm to others.

George and Lily stayed quiet for a long time but decided to speak out after receiving a particularly pearl-clutching letter which accused them of bringing ‘the wrong type of people to our distinguished town’.

It was the last straw.

‘We can’t make excuses for this kind of thing. Bullying and harassment aren’t right,’ said George. ‘The only way you can fight hate is with love and peace.’

It is dispiriting, but perhaps not surprising, that not even a pandemic can hush the snooty drumbeat that still thrums in the darker corners of Little England.

Restaurants, cafes and hotels have been devastated by the pandemic.

The catering industry is on its knees, reeling from the hammer blows of myriad lockdowns from which it may never fully recover. 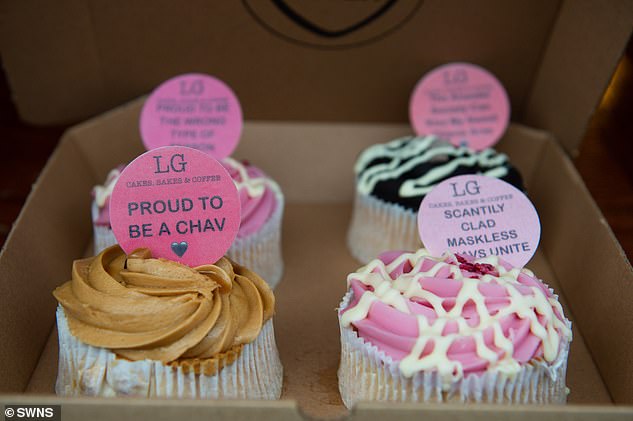 Meanwhile, some social media posts have complained that the café does not adhere to Covid policies — but the couple are now operating the LG as a ‘cakeaway’

Already thousands of hospitality outlets in cities and small towns have closed their doors for good.

That’s just one reason why locals in Arundel should be celebrating a business and a couple who have not only managed to stay open during a series of brutal lockdowns but have flourished, too.

I can see that some may find LG a little garish, with its cheeky love hearts frontage and dim teens posing outside with their cupcakes, but come on. How snobbish do you have to be to deny anyone a moment of sugary cheer in these bleak days?

That’s why I salute the energy and hard work this young couple have poured into their business — because if you think getting up at 5am to start baking, running a café and serving the torn-scone faces of the public every day is a piece of cake, then think again.

Many people don’t realise that when this pandemic is over, that will not be the end of it.

In the empty, economically shattered High Streets across the land, where even the charity shops have gone out of business, how many young couples are going to be brave or solvent enough to sign a lease on a café or a restaurant and take a chance on a new business?

So let’s celebrate the ongoing success of the LG Café and the inspiring duo who run it. Let’s hope they are not crushed like chocolate sprinkles by the sour, corrosive snobbery of a few vocal local loons.

Bake on, George and Lily. I’m with you all the way.

Goodbye, Melania. After not writing her own thank you notes (unforgivable) to the White House staff who have looked after her family for four years, she left Washington draped in mourning weeds, even though her heart must have been soaring.

Melania’s nightmare was finally over but she was chic to the bitter end, leaving the world stage in the highest heels sported by any First Lady, accessorised by a black Hermes Birkin handbag worth about £55,000.

Who wouldn’t rather clutch one of those than Donald’s tiny, clammy hand?

By the time the Trumps’ flight landed in Florida she had changed into this Gucci summer kaftan and frumpy flats. 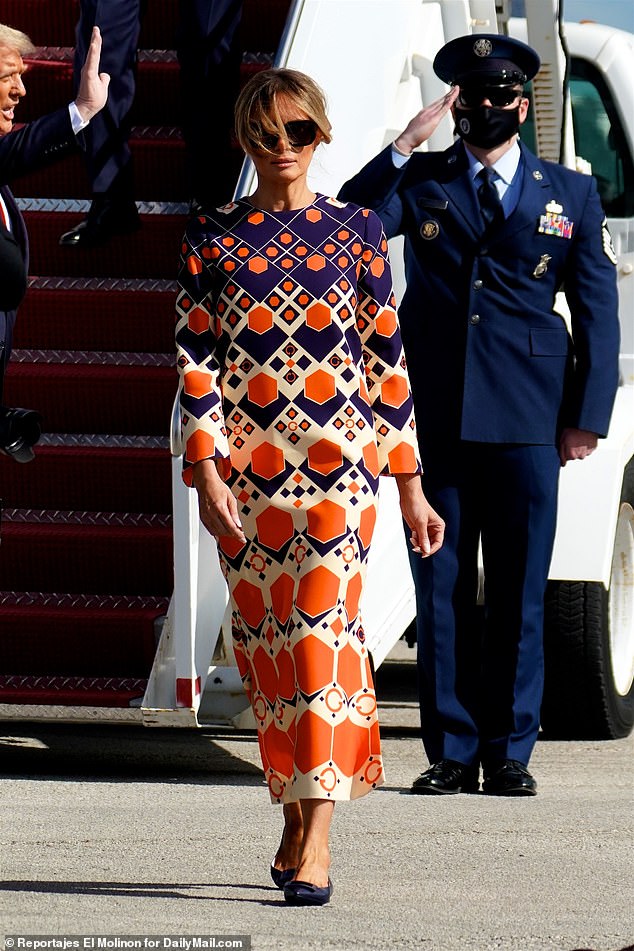 Goodbye, Melania. After not writing her own thank you notes (unforgivable) to the White House staff who have looked after her family for four years, she left Washington draped in mourning weeds, even though her heart must have been soaring

Most remarkably, she even carried on walking as Donald stopped to pose for the cameras. The message was clear. Melania was over and out. She’s had it up to HERE.

She is not contractually mandated to hold her husband’s hand in public any more, to play the dutiful wife — she has run away from the circus and who can blame her?

The presidency was Donald’s dream, not Melania’s.

She sacrificed four years of her life on the altar of her husband’s terrible ambition, getting little more than disdain for her efforts. Fascinating to the end, she will always be my Top Trump.

Oh hello Lottie Moss, half-sister of the more famous Kate and the latest ‘celebrity’ to out herself for mysteriously ‘working’ abroad.

‘Cats out the bag I guess — been working on something really fun for work out here can’t wait for you guys too see!’ was Lottie’s barely literate message under an Instagram photo this week. 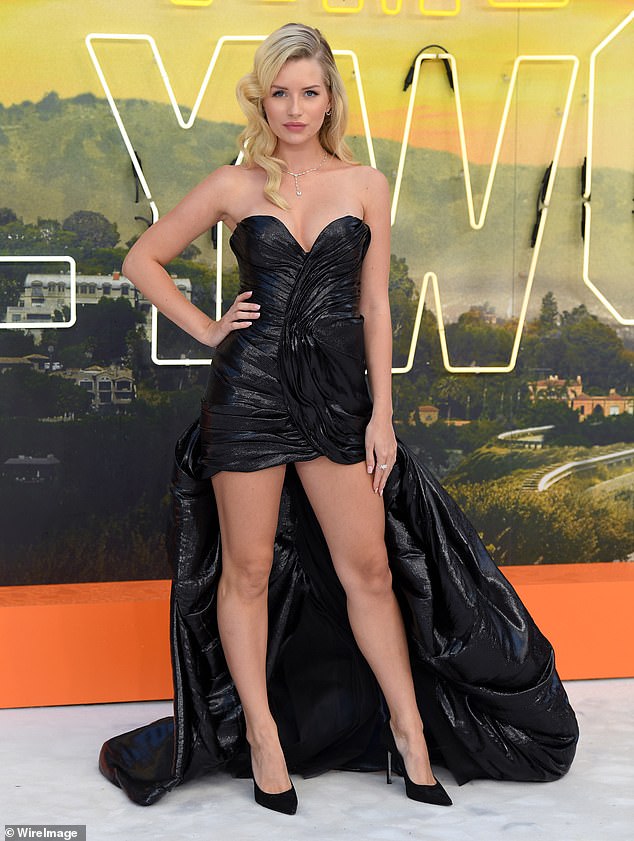 Oh hello Lottie Moss, half-sister of the more famous Kate and the latest ‘celebrity’ to out herself for mysteriously ‘working’ abroad

What need do they have for punctuation and grammar? Which is correct? What is correct?

No point in asking Lottie, 22, who had to publicly apologise for jokingly describing herself as a Covid ‘super-spreader’ last month.

She said that she was ‘young and dumb’ and often forgot her status as a ‘public figure’.

Now she is busy helping mankind by ‘working’ in a bikini in Los Cabos. What kind of keyworker job is that? And can we all have one, please?

Look out Keeley, that is the stairway to Hell

In the new Keeley Hawes drama Finding Alice (ITV), my favourite actress is married to an architect who dies when he falls down his own ridiculous staircase (pictured right).

At last! This is the drama I have been waiting for all these years.

Why do architect-designed houses almost always have these frightening staircases? Floating steps. No handrails or banisters. Spiralling up to the double-height mezzanine floor.

I feel dizzy and ill just looking at them.

It is a mystery not only why architects love these monstrosities so much, but how building regulations allow their construction.

You’d think they would be against every health and safety rule in the book but no, across the land in designer houses, on television and in real life, these stairways to CD (Certain Doom) flourish unchecked. 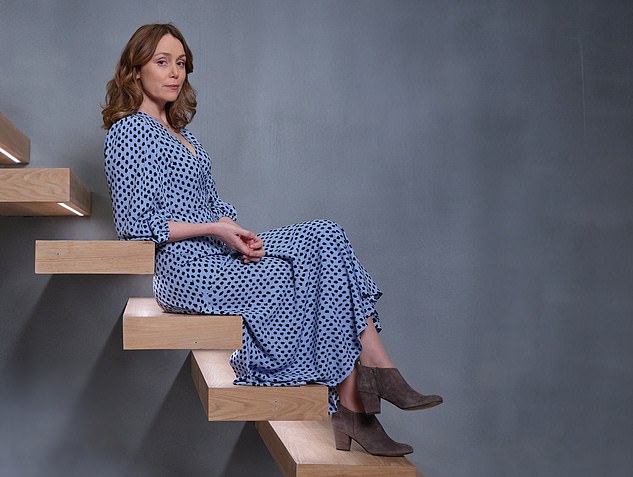 In the new Keeley Hawes drama Finding Alice (ITV), my favourite actress is married to an architect who dies when he falls down his own ridiculous staircase (pictured right)

This week a couple on Grand Designs had a similarly terrifying stair structure in their Dutch barn build.

It might not be fashionable but what is so wrong with a nice, steady banister and a slip-proof stair runner?

As Americans from both sides of the political divide reel under PTSD — Post-Trump Stress Disorder — let’s take a moment to applaud Joe Biden’s Covid-restricted inauguration.

It was perfectly pitched, the kind of political showbiz event America does so well. Bruce Springsteen opened the evening’s entertainment with his song Land Of Hopes And Dreams.

Jon Bon Jovi sang a version of Here Comes the Sun, while Katy Perry bawled through her hit Firework, including the lyrics: ‘After a hurricane, comes a rainbow’.

OK creatives! We get the message.

However, I Iiked Biden’s quiet tone of optimism — there was no glorying in victory, only a sense of relief.

It was, said chatshow host Stephen Colbert, as if Americans ‘had been on a ship in a storm for four years and we have just stepped onto dry land’. He added: ‘I want to kiss the ground.’

Crews in Chesapeake respond to 2 fires Thursday evening, one at studio automotive shop

Coronavirus mutating much faster than before, finds Indian Institute of Science...