The fortunes of India’s shadow lenders are showing signs of turning, suggesting stimulus measures from policy makers will help the troubled sector weather some of the fallout from the pandemic.


Premiums that investors seek to buy AAA rated five-year bonds of non-bank lenders over similar-maturity government notes narrowed the most last month since at least 2012, helping a gauge measuring bond spreads to strengthen. A custom index of shares of 20 financial firms and other companies also improved. 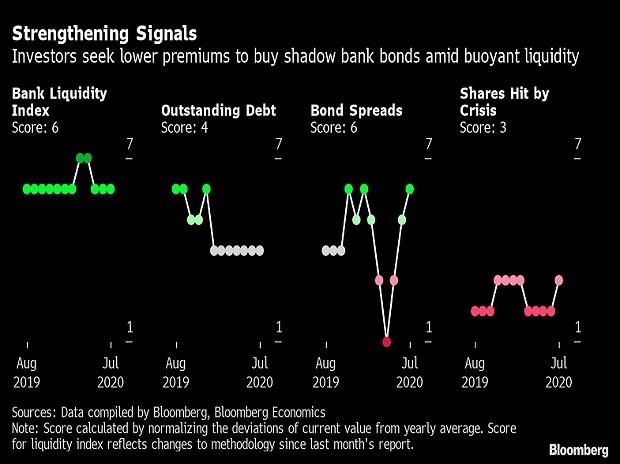 The sound health of shadow banks is vital because they form the backbone of the Indian economy in lending to a wide range of borrowers from small merchants to business giants. Support for these financiers is essential for Prime Minister Narendra Modi as he seeks to revive lending and support economic growth, which is forecast to shrink this year for the first time in four decades.


The government in mid-May announced Rs 3 trillion ($40 billion) of collateral-free loans to the nation’s small businesses and a 750 billion rupee special credit line to non-bank financiers. In its latest move last week, the Reserve Bank of India provided 100 billion rupees of special liquidity to organizations that fund mortgage lenders and housing finance companies, and permitted banks to restructure some loans.


Despite an improvement in the sector’s health, which was hit by a credit crunch since 2018 when a large infrastructure financier defaulted, there are lingering concerns among investors. Many are worried that the financial impact of the pandemic on companies has been masked by central bank’s deferral on loan repayments for individuals and businesses.


“There are asset-quality issues that are emerging,” said Rajeev Radhakrishnan, head of fixed income at SBI Funds Management Pvt., India’s biggest money manager. “Government steps just address the liquidity problem the sector was facing, so it’s better to wait rather than increase investments.”


The Bloomberg check-up of the sector’s health also showed that:


The scores attached to each of the indicators have been calculated by Bloomberg by normalizing the deviation of the latest value of the indicator from its yearly average and have been assigned on a scale of 1 to 7, with 1 implying weakness and 7 showing strength.


(With assistance by Anil Poonia, and Chloe Whiteaker)

COVID-19 Impacts: Automotive Front-end Module Market Will Accelerate at a CAGR of Over 2%...