Commerce and Industry Minister Piyush Goyal on Monday said India’s balance of payments would be “very, very strong” in the current financial year, on the back of higher-than-expected exports and a fall in imports.


“Exports have shown a good turnaround. We are in July at about 91 per cent export level of the corresponding period last year. While imports in July are 70 per cent of last year’s level,” he said during the inaugural session of the India Virtual FMCG Supply Chain Expo 2020, organised by the Federation of Indian Chambers of Commerce and Industry (Ficci).


India posted a trade surplus of $790 million in June, its first in over 18 years, with imports plunging as the Covid-19 pandemic depressed domestic demand for crude oil, gold, and other industrial products.


He came down hard on those criticising him for promoting domestic industry as part of the government’s ‘Atmanirbhar’ programme. Goyal said there was need for a “fair and reciprocal” appr­oach to Indian goods and that business should be done among equals. “I get to hear these days that we are going back to the licence raj, whenever I promote domestic industry. All these years, I heard that there was no level playing field among local and global players. Now when we are attempting to correct this, criticism is mounting,” he said.


India has been increasing curbs on imports of products and parts, especially from China, as part of its ‘Atmanirbhar’ programme.


Last week, a notification issued by the Directorate General of Foreign Trade (DGFT) had put television sets of different screen sizes in the restricted list of items for imports. These were earlier in the free import category. 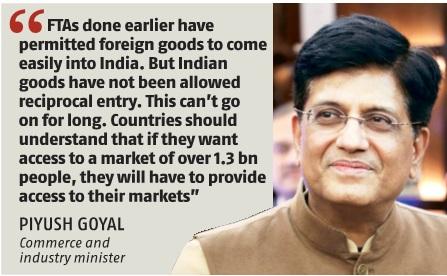 The restrictions meant that imports of these items would have to follow a process of verification and scrutiny by the ministry before permission was granted for their entry. The latest checks on imports followed the Centre’s earlier decision to make its approval mandatory for foreign investments from countries that shared land borders with India including China.


Goyal, who is also the railway minister, said the government was reviewing all free-trade agreements (FTA) done between 2009 and 2011 and found most of them to be “asymmetrical”.


“Our observation is that FTAs done earlier have permitted foreign goods to come easily into the country. But Indian goods have not been allowed reciprocal entry. This can’t go on for long. Countries should understand that if they want access to a market of over 1.3 billion people, then they will have to provide access to their markets as well,” he said.


Goyal cited examples of Indian steel, medicines, and tyres that were not permitted entry into foreign markets. European countries, for instance, have opposed technical standards imposed by India on import of tyres, even as they have restricted export of tyres from India, he said.


Goyal said firms investing in the country must stop having an “assembly workshop” approach that has typically characterised manufacturing here. “It is time to focus on India for India, where indigenisation is taken up seriously rather than importing parts or semi-knocked down units for assembly. The quality standards of Indian goods also need to improve,” he said.

Covid cases are rising across Asia again, with Japan reporting an uptick in cases ahead of the Olympics