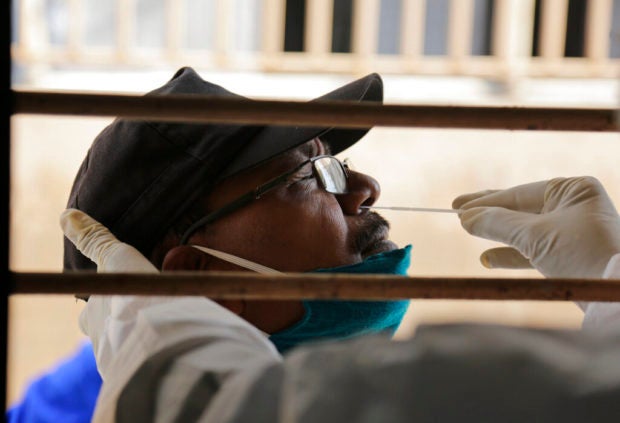 A health worker takes a nasal swab sample to test for COVID-19 at an urban health center in Ahmedabad, India, Thursday, Sept. 10, 2020. India’s coronavirus cases are now the second-highest in the world and only behind the United States. (AP Photo/Ajit Solanki)

NEW DELHI — India reported another record spike of 95,735 new coronavirus infections in the past 24 hours as the virus spreads beyond its major cities.

The Health Ministry also reported 1,172 deaths in the past 24 hours, taking total fatalities up to 75,062. Its death toll is third-highest in the world behind the U.S. and Brazil.

The ministry said the surge in new infections is due to ramping of daily testing that exceeds 1 million now. However, experts caution that India’s outbreak is entering a more dangerous phase as the virus spreads to smaller towns and villages.

The Indian capital saw a record surge of 4,618 new cases in the past 24 hours with 19 deaths. New Delhi, Pune, Mumbai and Chennai are the worst-hit cities in the country.

With the economy contracting by a record 23.9% in the April-June quarter, leaving millions jobless, Indian authorities have said they have little choice but to continue reopening the economy.

Meanwhile, the Serum Institute of India maintained that the temporary halt to late-stage studies of AstraZeneca’s COVID-19 vaccine candidate would not impact the timeline for vaccine trials in India. The studies in multiple countries were halted because of “potentially unexplained” illness in a British recipient.

Indian authorities said they would review the illness report and assess the information from the initial human clinical trials in India.

Serum, the world’s largest maker of vaccines by volume, is mass-producing the vaccine for low and middle-income countries.

In other developments in the Asia-Pacific region:

— South Korea’s new coronavirus cases have come below 200 for an eight straight day, suggesting a viral resurgence is slowing amid stringent social distancing rules. The Korea Centers for Disease Control and Prevention said Thursday it has reported 155 additional cases over the past 24 hours, taking the national tally to 21,743 with 346 deaths. New infections spiked in South Korea, mostly in the greater Seoul area, since early August. Authorities in the Seoul area subsequently ordered the shutdown of churches, nightspots and fitness centers and restricted dining at restaurants. Those enhanced rules expire on Sunday, and the government is to announce whether to extend them.

— Clinical trials for AstraZeneca’s COVID-19 vaccine candidate have been halted in India, the Serum Institute of India said Thursday. The institute is the world’s largest manufacturer of vaccines by volume and has said it will mass-produce the vaccine candidate developed by the University of Oxford. On Tuesday, AstraZeneca said an unexplained illness in a test recipient had triggered a “standard review process” and that late-stage studies had been put temporarily on hold. Serum Institute of India, though, had said trials in India were continuing. But after a communication from Indian regulators, the company paused their trials on Thursday. “We are reviewing the situation and pausing India trials until AstraZeneca restarts the trials,” the company said.

— Tokyo is lowering its COVID-19 alert by one notch from the highest “red” category to “orange” on its four-level scale following a decline in the number of new cases, though Gov. Yuriko Koike urged residents to continue taking preventive measures. Koike said Thursday that the decision is based on findings that the average number of new cases per day in the past week fell to 149 from 183 the week before. Koike said the Tokyo government will lift requests for bars and restaurants serving alcohol to close at 10 p.m., allowing them to return to their usual hours next Wednesday. “We still need to use caution,” she said at a news conference. “We have to continue to take appropriate measures to keep a balance between prevention of the spread of infections and social and economic activity.” Some experts are warning of a resurgence because the slowing of infections is still modest. Tokyo confirmed 276 new cases on Thursday for a total of 22,444, including 379 deaths. Nationwide, Japan has reported 73,221 cases and 1,406 deaths as of Thursday.

— A Singapore court has sentenced a Taiwanese woman to 11 weeks in jail for intentionally sneezing at a security guard who barred her from entering a Singapore shopping mall. The court issued the sentence Thursday after Sun Szu-Yen pleaded guilty in June to performing a rash act and an unrelated harassment charge, Singapore media reported. Sun and her son were stopped at a mall entrance on April 12 for not wearing masks amid the coronavirus pandemic, local media said. She tried to use her scarf as a mask but when the guard refused to let her in, she sneezed in the guard’s direction and reportedly told the guard to “shut up.” She also took her passport out of her bag and said “I am China, I am Taiwan,” local media said. She was also charged with harassment for throwing several items, including a vacuum cleaner and a plastic chair, out of her condominium window in June last year, local media said. Prosecutors told the court that she is not mentally ill but has a mood disorder.

COVID-19 Live Updates: News on coronavirus in Calgary for April 15