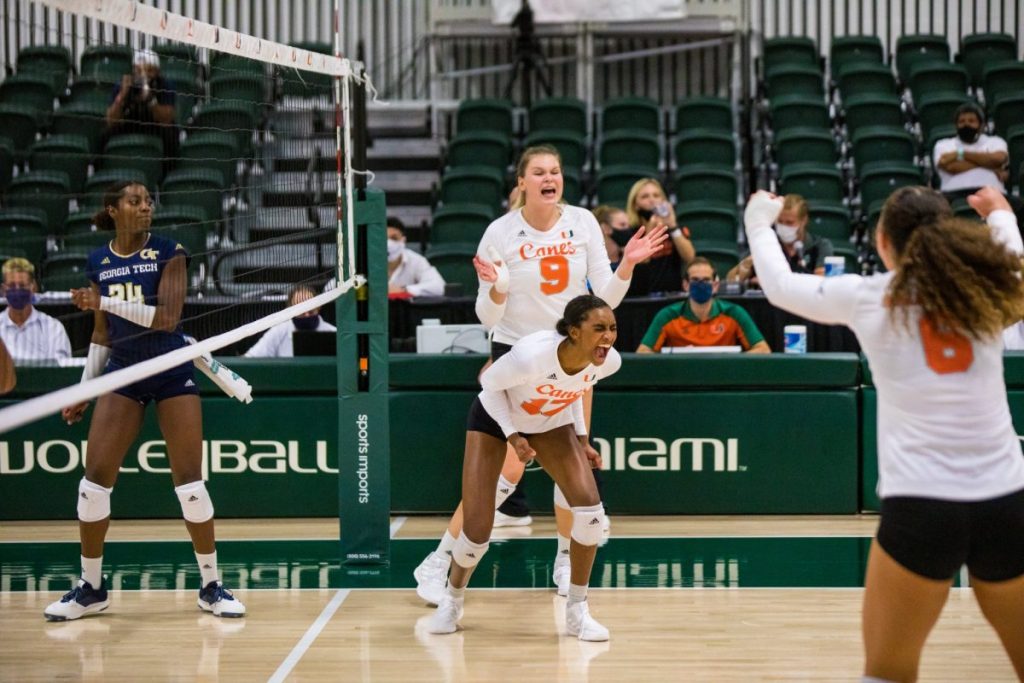 After an offseason filled with uncertainty about whether or not they would take the court this season, the Miami Hurricanes volleyball team opened their abbreviated season with a two game series against conference rival Georgia Tech last Thursday and Friday. The Hurricanes defeated the Yellow Jackets in the first game of the series, but dropped the second game in five sets.

Despite going 1-1 to commence the season, the series split represents a strong start for a Hurricanes team that went 10-16 overall last season and 6-12 against ACC opponents in 2019. Two of those conference losses came to Georgia Tech, who went 26-8 overall and handed Miami two losses in the match minimum of three sets last season.

With six freshmen added to this year’s Hurricanes roster and five additional players below junior year, the Hurricanes put forth a relatively young and inexperienced roster against a juggernaut of a Georgia Tech lineup that features three players on the 2019 All-ACC First Team and two on the All-ACC Second Team. Miami was the underdog in the first match and narrowly escaped with a fifth-set victory to upset Georgia Tech, but the Yellow Jackets’ experience and roster depth was able to overcome an early Miami lead in the second match and hand them their first loss of 2020.

In the season opener, Miami’s offense was led by a back-to-back All-ACC Second-Team-award winner and All-ACC Pre-Season honoree, outside hitter Elizaveta Lukianova, whose 23 kills and .370 hitting percentage were team highs.

Seven of those kills came in the first set as Miami’s offense bulldozed through Georgia Tech’s defensive schemes to tally 17 kills and a .516 attack percentage. Also in the first set, redshirt freshman Angela Grieve made her first appearance on the floor as a Hurricane and registered four kills in her debut set. Grieve was sidelined all of last season with a torn lisfranc ligament and a fractured navicular bone in her foot.

Holding Georgia Tech to a .250 attack percentage in the first set, Miami was able to cruise to a victory over the Yellow Jackets 25-17.

Throughout the second set, Miami strengthened their grip on defense, containing Georgia Tech to a .219 attack percentage. Led by four blocks and the offensive contributions of Janet Kalaniuvalu, Janice Leao, Lukianova and Grieve – who registered at least three kills on the set – Miami took a 2-0 match lead with a 25-20 set win over Georgia Tech.

The narrative of the night flipped in Georgia Tech’s favor throughout the third and fourth set, in which they neutralized a once resilient Miami offense to attack percentages below .250 in both sets. Emerging offensively when it counted most, the Yellow Jackets were back in the game ahead of the final set with 25-19 and 25-18 set victories.

In the exhilarating final set between the Yellow Jackets and the Canes, the two exchanged points back and forth to force 10 ties and five lead changes. However, Lukianova took over offensively for Miami and converted six of her nine kill attempts for points to reel in a 16-14 set victory for Miami and grant the Hurricanes their first match win of the season.

On the night, four Hurricanes – Kalaniuvalu, Lukianova, Grieve and freshman Lauren Tarnoff – finished with kills in the double figures. Kalaniuvalu was also the only Hurricane to post a double-double with 13 kills and 11 digs.

While the rematch between Miami and Georgia Tech also went the distance, the Yellow Jackets ultimately found themselves in the win column with a come-from-behind match victory after trailing 2-1 in the third set.

Both teams were sluggish offensively to start play, with each hitting below the .200 threshold throughout the first set. Lukianova paced both teams in the set with five kills, while adding three blocks as Miami scored seven out of the final 10 points in the set to take another 1-0 lead over Georgia Tech.

Despite both teams exchanging points early on, a six-point rally from Georgia Tech gained them a substantial lead over Miami and a 25-17 set win. However, the Hurricanes reclaimed their match lead over the Yellow Jackets with another strong set from Lukianova, who recorded seven out of Miami’s 15 kills in the third set. Six Canes also registered blocks to their stat lines in the set and they held Georgia Tech to a .086 hitting percentage in the 25-20 set win.

The Yellow Jackets evened the match once again in the fourth set with a 25-23 win that was made possible after several successful play challenges by Georgia Tech head coach Michelle Collier stripped Miami of points and distributed them back to the Yellow Jackets. In the final set, Miami fell to Georgia Tech 15-11 after surrendering three out of the final five points in the set.

While both teams displayed strong defense throughout the match, offensive struggles by the Canes drowned them in their lost sets. Miami had 12 service errors on the evening compared to Georgia Tech’s seven, and Georgia Tech’s far more balanced offensive attack saw three of their players – Julia Bergmann, Mariana Brambilla and Mikaila Dowd – end the contest with double-doubles, whereas Miami did not have any players accomplish such a feat.

Despite the struggles, Lukianova and setter Savannah Vach posted career nights on the statsheet. Lukianova’s previous personal best of 24 kills was well surpassed with 28 versus the Yellow Jackets, and Vach’s career-high 59 assists tied for the ninth-most in UM history.

Going into the second week of their fall season with a 1-1 record, the Hurricanes will prepare to play at Wake Forest this upcoming week on Oct. 2 and Oct. 3 and build off of what was an all-around strong performance versus Georgia Tech.

Hundreds of jobs on offer at Digital Skills Festival event to be attended by Auto Trader, Bentley, musicMagpie and the ICO

After the Spanish flu came The Roaring 20s — what fashion trend will follow...

When the Mangalitsas meet the Red Wattles | Food & Drink...

Automotive Fuel Injector Market Size Worth Around US$ 102.56 Bn by...