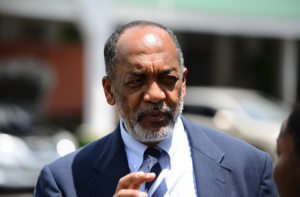 Kaieteur News – It is critical for Guyana, a novel oil producing nation, to have adequate capacity to monitor the exploration, development and production oil by ExxonMobil so as to ensure what is submitted by the company on paper, is an accurate reflection of what is taking place on the rig.
As such, Dr. Vincent Adams who holds a PhD in Environmental Engineering, underscored the urgent need for the governing People’s Progressive Party Civic (PPP/C) to staff the Petroleum Unit at the Environmental Protection Agency (EPA.
On a recent panel discussion, Dr. Adams who previously headed the agency explained that under his tenure, the EPA had worked with the World Bank to develop a Petroleum Unit containing 36 highly-skilled staffers to streamline its monitoring duties of the oil and gas sector. However, the agency’s efforts were hampered due the then Coalition regime’s inability to approve the requisite funding due to its caretaker status.
With a new government and budget in place, Dr. Adams posited that acquiring the relevant officers for the unit should be a priority to ensure there is no a value leakage or breaches of production licences. “I am pleading with the government to make sure that we start staffing that unit because we have to have 24-hour coverage and on site monitoring so that we could see exactly what is going on,” he advised.
Dr. Adams noted too that with proper and accurate verification, Guyana runs the risk of accepting whatever is being reported by ExxonMobil as gospel. He said “You know in my experience, over 90% of the time, when you sit in your office, 90% or more of what the contractor is telling you is totally wrong, is totally misleading as a matter of fact.”
When asked whether there has been any independent verification of the oil potential of the Stabroek Block outside of what has been stated by ExxonMobil, Dr. Adams answered in the negative. While he admitted that all of the data comes from the American super major, he pointed out that he has no qualms with this as Exxon is accountable to the United States (US) government and thus must be transparent and truthful in its reporting.
“They have more accountability than Guyana to deal with, in terms of reporting numbers. So, it’s not just they can willy nilly say they’re going to put eight billion barrels of oil on their books, so they can enhance the financial appearance. They’re not going to be allowed to do that and get away with it,” Dr Adams told the panel he was part of recently.
Be that as it may, Dr. Adams recommended that Guyana needs to have the capacity to conduct its own verifications of the data.
A 2019 mud spill in the Kanuku Block operated by Spanish oil company Repsol had exposed just how important it was for the EPA to have on site monitoring. Dr. Adams had revealed that the company reported that only 84 barrels of mud was released into the ocean due to a valve that was open during its efforts to drill a well.
While 84 barrels of mud is what the company said was released, the official was keen to point out that the EPA due to its limited resources was incapable of verifying if this is accurate as no designated officer is at Repsol’s offshore operations since the EPA does not have the human resources to ensure same. He stressed that this state of affairs needs to change as soon as possible especially when one takes into account, how aggressively exploration and development activities for the oil sector are ramping up offshore and onshore.

Waukesha School Board candidates discuss COVID, racism and the budget

DocuSign Inc Is More Than Just a Stay-at-Home Stock

How does a loud voice steer Ryanair in the right direction?

How to get the most money for your old phone, computer or tablet