General Electric Company (NYSE:) has seen no end to its troubles over the last few years but the end may be in sight. The company has been working hard to restructure, refocus, and reinvigorate growth under the leadership of CEO Larry Culp and those efforts are about to pay off.

A recent analyst-call from Goldman Sachs underscores the opportunity and suggests investors could see a minimum 30-40% upside in the not-very-distant future.

Goldman Sachs analyst Joe Ritchie reinstated coverage on GE stock with a Buy Rating and what amounts to the Wall Street high target of $10.

Bank Of America has the stock pegged at the $11 level but that rating was set way back in June. According to Ritchie, CEO Culp and his management team are turning GE into a “leaner, structurally more productive company with better capital discipline,” and one that will emerge from the pandemic stronger than before. The takeaway, Ritchie is “simply making the call that as GE’s higher-margin businesses recover, FCF will improve materially.”

Most analysts are bullish on GE stock. The average rating is a buy and it has been creeping up over the last couple of months. There are 21 ratings on the stock 9 of which are very bullish, 5 bullish, and 7 neutral with no bears in the mix. The caveat is that only 15 are as current as this year, and 10 as of the March market bottom. The most current ratings are evenly split with 5 hold/neutrals and 5 buys with a consensus in the range of $8 to $9 dollars.

GE disclosed receiving a Wells Notice from the SEC tied to legacy issues with the company’s insurance business. The notice alleges wrongdoing in relation to financial reporting that the SEC “may” pursue.

While not good news for the company there are some caveats the first being these issues come from the time period prior to Larry Culp’s ascension to CEO and have been long-corrected. If charges are brought it would be a civil and not a criminal action.

GE has long been an advocate of the coal industry and has suffered along with it as it declines. That’s why the company’s recent decision to abandon the new-build coal power market is big news. The company has decided to focus only on business with positive growth trajectories such as renewables and gas.

To that end, the company has announced two major partnerships that will help it achieve its exit targets. The first is a contract to build wind-powered turbines for what will be the world’s largest offshore windfarm. The second is a $580 million investment into a joint venture from a Russian manufacturer that should be in production within five years.

The Technical Outlook: GE Is Trading At Rock-Bottom Prices

GE was on the verge of a major reversal in stock prices in the early months of 2020. And then the pandemic hit and the stock sank to even lower lows leaving investors wondering if it would ever recover. Now, nearly 8 months into the pandemic, the company is still plugging along and on track for what could be a monumental turnaround.

Strictly speaking of the weekly charts, the technical set up is quite bullish. The stock is trading just above the long-term low where it has put in a nice bottom. The indicators confirm the bottom and more, a reversal, in that stochastic is firing the second and higher of two bullish entry signals at a strong support level, and MACD is bullish and on the rise.

The only thing missing is a move above the 30-week EMA, a move that I think could come this earnings cycle. The company is slated to report on 10/28 and deliver -$0.03 in EPS. 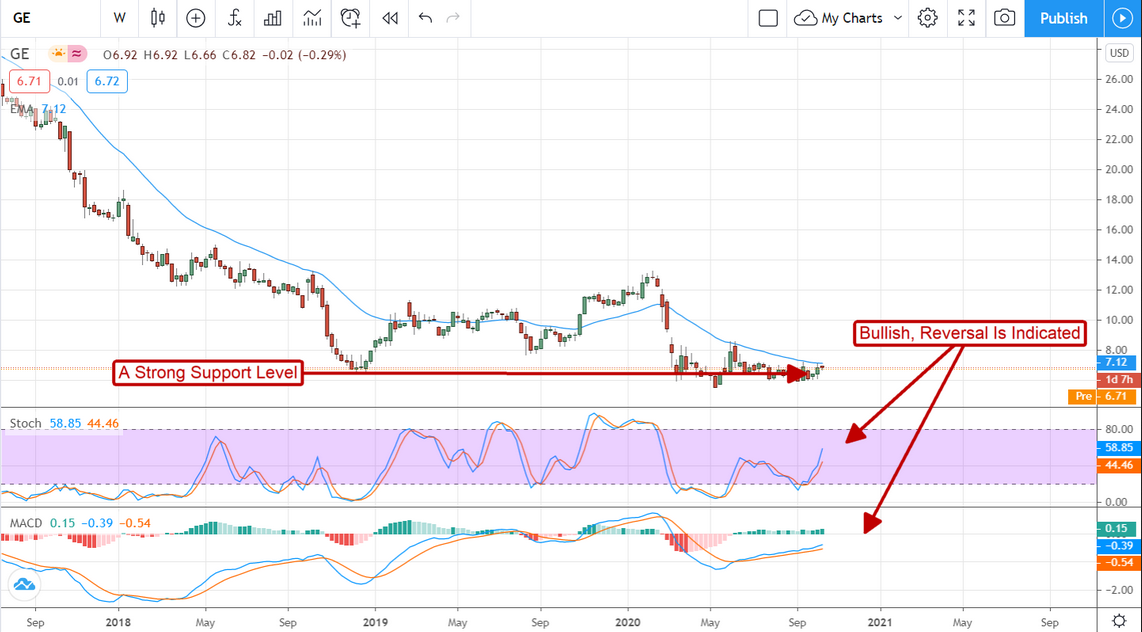 U.S. to Impose Sanctions to Choke Off Iran’s Financia…

For diverse corporate board members, upward mobility stops with a seat at the table