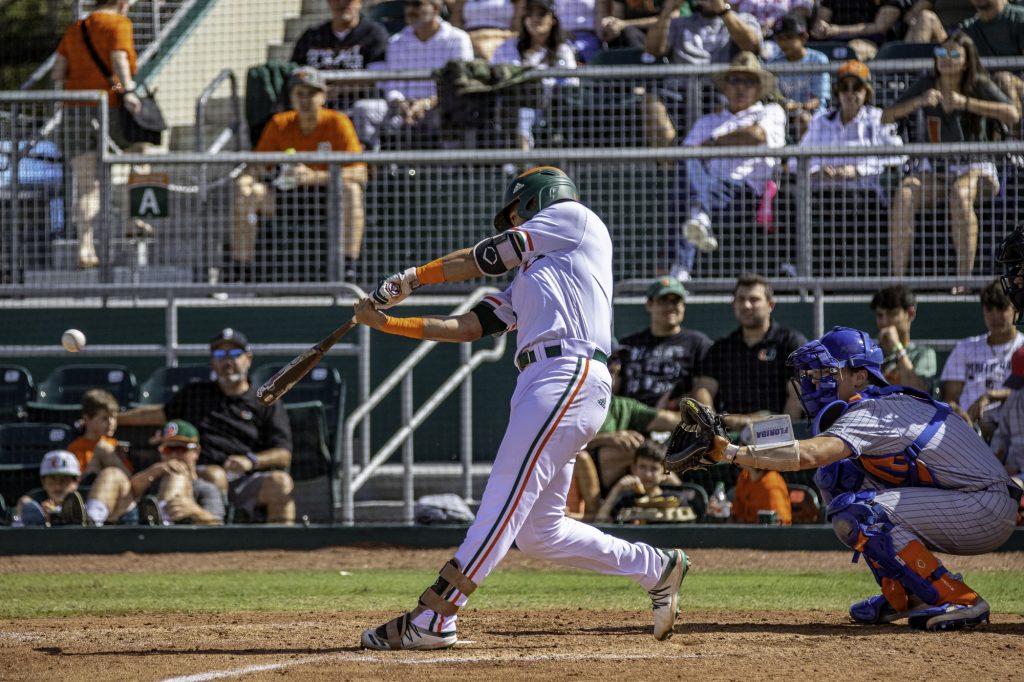 Raymond Gil hits a home run during the weekend series against the Florida Gators in 2020 at Mark Light Field. Photo credit: Josh Halper

The Miami Hurricanes won the annual three-game series against in-state rival Florida last weekend for the first time since 2014. Last weekend’s dispatching of the consensus preseason No. 1 team has earned UM glittering accolades of their own.

But the Canes—ranked as high as first by Collegiate Baseball Newspaper and placed in the top ten by every other major publication—will now be tested on how they handle success as the Virginia Tech Hokies come to Coral Gables and Atlantic Coast Conference play commences.

“We’re worried about Friday night now,” said starting pitcher Daniel Federman on 560 WQAM’s Hurricane Hotline Tuesday. “We want to do well in the ACC. We want to do well in every game. It’s always nice to start up conference play, usually it’s a little bit later. We get to go right under the fire second week of the season.”

“Don’t worry about the rankings,” Gino DiMare said on Hurricane Hotline about what he told his team. “You’re not getting crowded champion this weekend.”

It may be easy to discount the Hokies, especially after Miami’s historic wins at the Gators’ brand-new ballpark to open the season. Virginia Tech was pegged by the league’s coaches preseason to finish second-to-last in the ACC’s Coastal Division and is the only unranked conference foe on UM’s schedule before April 9.

Adding to the perceived separation between the teams is the fact the Hurricanes have dominated the Hokies in recent years. UM has won each of the past 11 matchups against their rivals from Blacksburg, as well as 17 of the past 18 total meetings since 2014. The past three series between the teams have resulted in a Miami sweep.

But 2021 is a new year. Miami played the role of the hunter last weekend in Gainesville. In its conference opener, the team will step into the shoes of the hunted.

“We have a target on our back,” Federman said.

VT will venture into South Florida with a 3-0 record, trying to spoil the Canes’ home opener. The Hokies opened 2021 with a doubleheader sweep over Kent State on Sunday before earning a 22-2 win over Radford on Tuesday.

“They’re always a tough team,” DiMare said about the Hokies. “We’ve won a bunch of games in a row [against them], but I bet if you looked at the scores, a lot of them are pretty close…you can’t just go on the field, throw your gloves out there and think you’re going to win.”

The Canes will stick with the same three-man starting rotation seen last weekend at Florida.

Daniel Federman will start for UM Friday night before freshmen Alejandro Rosario and Victor Mederos take the hill on Saturday and Sunday respectively.

Miami’s pitching will see four Hokies that hit above .300 in their first three contests. Outfielder Jack Hurley leads VT with a .429 batting average. Outfielder Gavin Cross has batted .333 with a home run this year, infielder TJ Rumfield boasts a .333 average with a team-high 1.385 OPS and two homers while infielder Fritz Genther’s average sits right at .300.

Redshirt junior Ryan Okuda will be set to get the start Sunday for Virginia Tech. The southpaw pitched three shutout frames in his team’s midweek blowout of Radford. A 2019 meeting between the teams at UM saw the Okuda face a single Miami batter in the eighth innings, where he allowed a single to then-Hurricanes catcher Michael Amditis. In 2018, Okuda pitched three innings against the Canes in Blacksburg, allowing four hits and two earned runs.

No matter what is thrown at Miami in this weekend’s series, they have shown so far this season they will not be bothered by it. The freshman class especially has passed the test of poise.

“We’ve got some very confident and high character guys that work hard that I feel can handle adversity,” DiMare said Thursday. “I don’t think they’re overwhelmed at all [by any team].”

Third baseman Raymond Gil summed it up: “The fact that we can stay controlled and composed is a huge thing. And to know that we’re good enough to come back from a deficit in any part of the game is huge.”