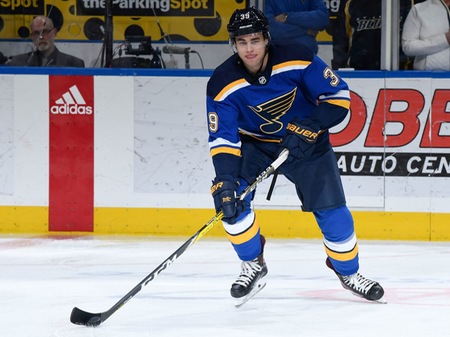 ST. LOUIS (Michigan Tech/ WBUP) – Former Michigan Tech hockey player Mitch Reinke signed a one-year, two-way contract with the St. Louis Blues the team announced on Sunday (Oct. 18). Reinke has appeared in one game for the Blues since he left Michigan Tech after his sophomore season in 2018.

Reinke was originally signed by the Blues as an undrafted free agent on March 26, 2018, and made his NHL debut on March 31, 2018. He was a Black Ace for the Blues during the 2019 Stanley Cup Playoff run and was on the ice for the celebration after the Game 7 win. He signed a one-year extension in July 2019 and again in October 2020.

The Stillwater, Minnesota native has appeared in 122 career American Hockey League games for the San Antonio Rampage. He was named to the 2018-19 AHL All-Rookie Team after setting franchise rookie records for goals (12), assists (33), points (45), and power-play goals (9). He was also the first Rampage rookie to play in every game of the season (76) and led AHL rookie defensemen with 45 points. In 2019-20, Reinke had five goals and 17 assists in 46 games.

Reinke played two seasons for the Huskies from 2016-18, appearing in 76 games. He was named to the All-WCHA Third Team as a sophomore and to the WCHA All-Rookie Team as a freshman, tallying 44 career points on nine goals and 35 assists. He was an alternate captain as a sophomore and was named to the Great Lakes Invitational and Ice Vegas Invitational all-tournament teams.

Prior to Michigan Tech, Reinke played in 111 games in two seasons for the Cedar Rapids RoughRiders of the USHL. He was team captain in his second season and earned USHL All-Rookie Second Team honors in his first season. He won a bronze medal at the World Junior A Challenge in December 2015 with Team USA and played three seasons for Stillwater High School before joining the RoughRiders.

St. Louis added the Springfield Thunderbirds as its AHL affiliate this offseason. The San Antonio Rampage was sold to Vegas and moved north. Reinke will most likely spend time with the Thunderbirds in Springfield, Massachusetts.

All the Best Christmas Tech Deals in One Place

From Gaming To Holograms, How Tech Is Helping Candidates Campaign In The Metaverse