Amid the stressed revenue position and spending pressure to spur economic activity during the pandemic, the fiscal deficit touched 120 per cent of the full year’s budget estimates (BE) in the first seven months of fiscal year 2020-21. However, tax revenue revived during the festive season and capital spending also saw a sharp upswing in October.

Fiscal deficit in the first half of the fiscal year touched 10.71 per cent of gross domestic product (GDP), based on the second quarter national accounts data released by the National Statistical Office.

Experts estimate full year’s fiscal deficit between 7 per cent and 9 per cent of GDP against 3.5 per cent estimated earlier by the government. 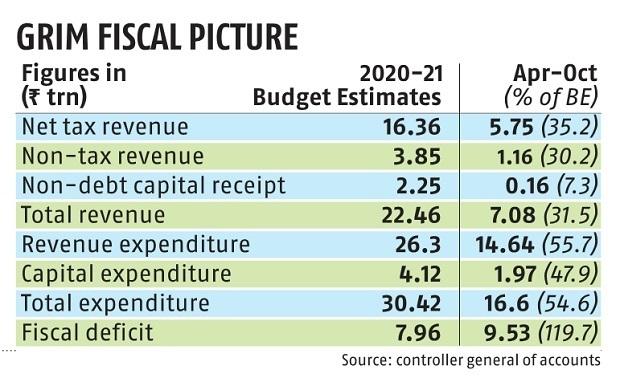 The gap between the Centre’s revenue and expenditure touched Rs 9.53 trillion between April and September. This is 119.7 per cent of the BE, government data showed. During the same period last year, fiscal deficit stood at 102.4 per cent of the budget target. Fiscal deficit had breached the budget target in July itself as the economy faced the most stringent Covid lockdown in the first quarter.

“The overall fiscal picture for the Centre for the April-October 2020 period remains grim, although the expansion in gross tax revenues as well as capital spending in October 2020 are encouraging,” said Aditi Nayar, principal economist, ICRA Ratings. “We expect the fiscal deficit to widen to Rs 14.5 trillion or 7.7 per cent of GDP (assuming contraction of 7.5 per cent in nominal GDP) in FY21 from the budgeted level of Rs 8 trillion, and Rs 9.4 trillion in FY20 (provisional),” added Nayar.

Meanwhile, October saw a turnaround in tax revenues with gross tax mop up posting a 17 per cent growth.

Coronavirus live news: one in nine people in UK in lockdown, India records another...