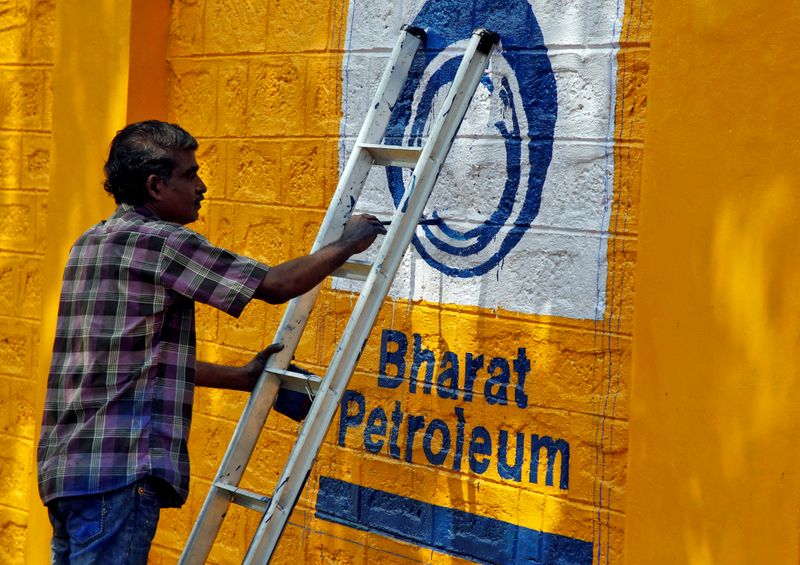 © Reuters. FILE PHOTO: A man paints the logo of oil refiner Bharat Petroleum Corp on a wall on the outskirts of Kochi, India

A Rosneft source, however, said his company will not buy BPCL. Another source said Rosneft would only be interested in BPCL’s marketing business comprising fuel depots and more than 16,800 fuel stations. “For this, India has to sell BPCL in parts,” the source said.

The Indian government – which needs funds to finance welfare schemes and bridge a fiscal deficit that has already topped the annual target – had aimed to raise $8 to $10 billion through the sale of its stake in BPCL. But BPCL’s share price has plunged nearly 30% over the past year to trade at around 386 rupees a piece on Tuesday.

“This is not the time to invest in refining… demand would be there for oil to chemicals and not conventional products,” one of the sources familiar with Saudi oil giant Aramco’s thinking said.

However, a second source familiar with Aramco’s thinking said that after showing interest initially Aramco has not submitted a formal expression of interest (EoI) even though the process was extended by two months to Sept. 30.

A third source said that Aramco has halted most of its investment plans into India due to the oil price crash and is unlikely to bid for BPCL.

“India will not get the deserved price for the BPCL stake sale in the current environment,” a fourth source familiar with Aramco’s thinking said.

India may have to look for other avenues to raise funds to meet its spending commitments, said Kiran Jadhav, who runs his own asset management firm with a 2 billion rupee ($27 million) portfolio. “If big firms are backing out, this will definitely hurt the share price and valuation of BPCL,” he said.

Sources said that neither Rosneft nor Aramco see much value in refining as the government in the Indian state of Kerala, home to BPCL’s biggest refinery, might challenge the privatisation in court and BPCL’s two other refineries are in cities, leaving little scope for revamp and expansion.

Reuters reported last week that India’s efforts to privatise BPCL could spill over into the next fiscal year, citing a government document and sources.

“Aramco has not participated in the EoI so far. Initially we had expected them to show interest. We are weighing our options,” said a source familiar with India’s government stake sale programme.