Since 2016, there have been at least 38 assassinations and 14 attempted assassinations in mining localities in KwaZulu-Natal (KZN). Mining-related assassinations are even more difficult to track than political killings. Motives can often be multilayered and the rural environment in which most attacks take place can render accurate data collection challenging.

In the murky world of mining-related assassinations, the mainstream media rarely reports on what is often viewed as “just another murder” in a poor rural community, and police investigations hardly ever lead to successful prosecutions.

The deadly conditions prevailing among KZN’s mining-affected communities are best illustrated by events at eMpembeni, a small rural community south of Richards Bay.

Richards Bay Minerals (RBM) is soon expected to begin operations nearby at its Zulti South site. Tronox KZN Sands, another mining company, has also applied for a water licence in the area (which is usually a forerunner to mining development). There is also a refinery and natural gas hub in the pipeline, but proper information about future development plans for eMpembeni remains shrouded in mystery.

Trouble began in eMpembeni in 2017, when residents raised queries about surveyors seen operating in the area. The local traditional authority, which falls under the Ingonyama Trust, subsequently told the community that some residents would need to relocate for what they described as an oil-development project which had been “approved by the King”, seemingly a reference to the Zulu monarch King Goodwill Zwelithini, the sole trustee of the Ingonyama Trust Board. The Ingonyama Trust is an entity formed in 1994 ostensibly for the “benefit, material welfare and social wellbeing of the tribes and communities” living within the boundaries of the apartheid-era KwaZulu Bantustan.

Four days after letters requesting information about the mysterious oil project were sent to provincial and national government departments, the assassinations began. Geshege Nkwanyana, chairperson of a local youth organisation and a subcontractor for RBM, was gunned down on 10 July 2018. Three days later, Nthuthuko Dladla, who had been involved in a local business forum, was shot dead in his car after leaving work. A community protest against the relocations was called off.

A traditional leader reported at the time: “We are scared for our lives. Right now, every house in this area is dark, closed. People are scared to open their doors. Some of us are in hiding. I have had to leave my house and rent a flat in town because I am not safe. There are people who are moving around here with guns. They are looking for me and other people up and down. Somebody is paying them for this.”

On 16 September 2018, resident Khaya Ncube was shot dead; another, Ndoda Ngcobo, survived an attempted hit. On 10 October, hitmen tracked down and tried to kill Vumani Shandu, a relative of Geshege Nkwanyana, who had been among the aborted protest march organisers and had been threatened that he and his family would be killed. By the end of 2018, three more residents were killed and three more survived assassination attempts.

Some of the victims allegedly had insider knowledge of corruption involving mining contracts, while others had accused the local traditional authorities of irregularly leasing land to prominent politicians. All had opposed relocation for the purported oil venture.

A breakthrough in investigations came only after a member of the police parliamentary committee intervened at national police level, and a task team from outside the area was established. Previous appeals to the provincial police commissioner had fallen on deaf ears, as had repeated complaints to various government departments.

On 14 February 2019, Justice Ngwane, who reportedly benefited from contracts with RBM, and his uncle Meshack Ngwane were arrested for three eMpembeni murders and a number of other serious crimes, including killings in other areas. Two hitmen turned State witnesses and were placed under witness protection. The wealthy Ngwane family allegedly enjoyed close connections with local police officers, and according to sources in the National Prosecuting Authority, during his bail application Ngwane boasted of relationships with Durban and Pietermaritzburg prosecutors.

In early May, Meshack Ngwane was released on bail. Although his bail conditions required he stay away from eMpembeni, he was allegedly seen there shortly after his release. Police patrols had been withdrawn after the Ngwane arrests, and repeated calls for their reinstatement were ignored. The community was once more living in terror.

On 10 May 2019, three relatives of Khaya Ncube (an assassination victim killed the year before) were shot dead and their bodies set alight. This included two-year-old Angel Ncube. Other members of the family escaped the massacre, another was reportedly killed the same night and yet another had previously fled to Johannesburg earlier after receiving death threats. Mxolisi Mjadu, a local man, was later arrested for the massacre and charged with three counts of murder, arson and two counts of attempted murder. He was refused bail and the trial is yet to be concluded.

The three eMpembeni murder charges against Justice Ngwane were subsequently withdrawn, due to a combination of lack of evidence, a missing witness and the two hitmen State witnesses claiming they had been forced to make statements under duress. Ngwane and the hitmen were released. The remaining cases against him will be heard in a different court, and an application has been made for charges against the two hitmen to be reinstated.

On his return home, Ngwane reportedly fired shots in the air and made public threats about revenge. He also threw a party that was allegedly attended by local police officers. There have been no further killings at eMpembeni or news about the mysterious oil venture, but the community remains on edge and unsure about their future. 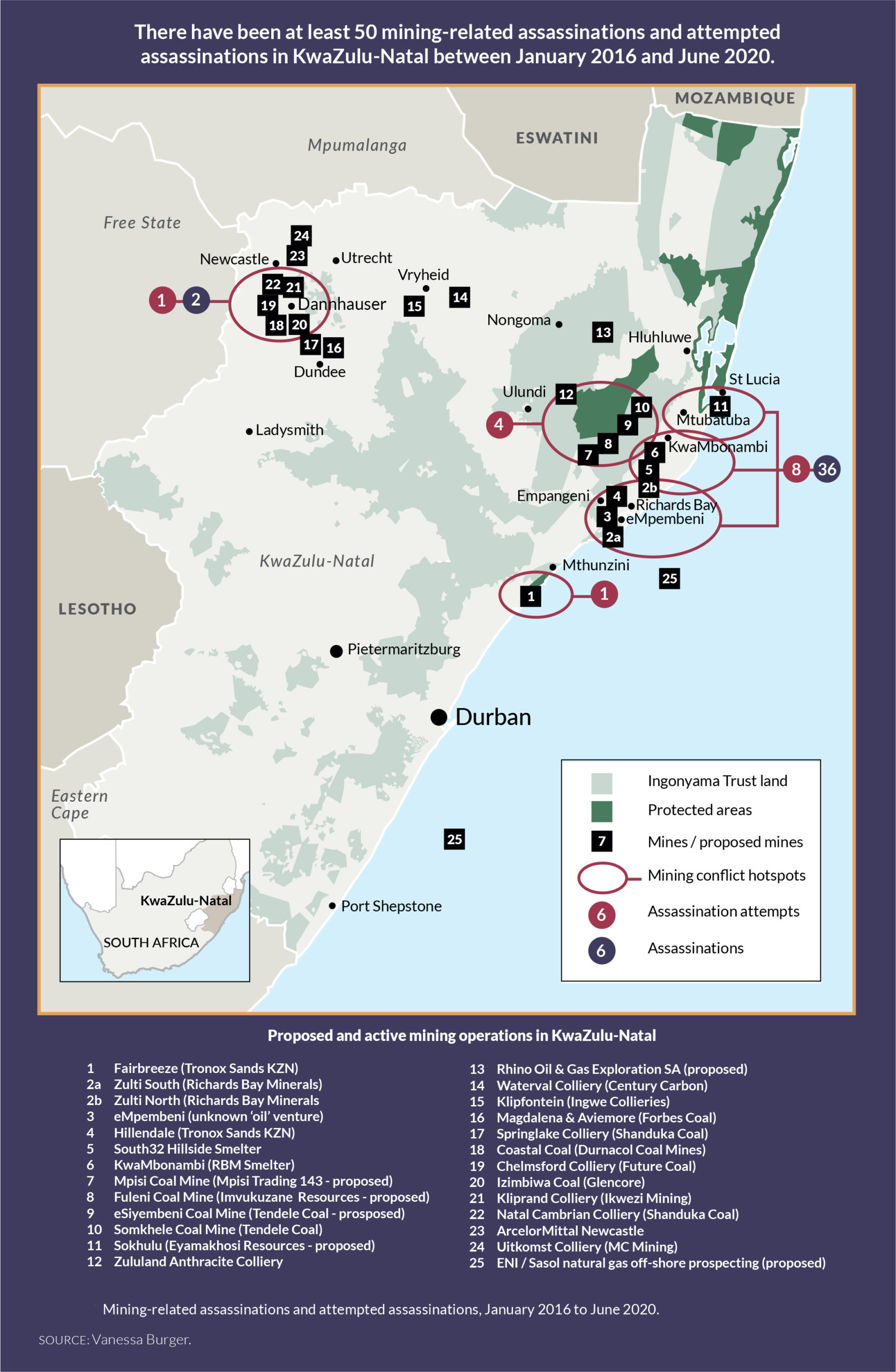 As seen at eMpembeni, the frequency of mining-related assassinations in KZN has accelerated in recent years. Our research found only one hit definitively linked to the KZN mining industry before 2016.

Other organisations such as Human Rights Watch have documented the climate of fear and oppression which activists in South African mining communities endure. It now seems that ordinary people perceived to be “standing in the way” of the alleged benefits of mining developments are being systematically hunted down and eliminated.

Conflicts of interest within traditional authorities – between lucrative mining royalties and contracts, on the one hand, and respecting the wishes of the communities they supposedly represent on the other – are one factor driving the community division and violence. Nowhere is this more apparent than with respect to the Ingonyama Trust. The traditional authorities implicated in the mysterious oil project in eMpembeni fall under the trust and residents were told that the project had been “approved by the King”, in an oblique suggestion that the trust had given approval. Elsewhere in KZN, traditional authorities falling under the trust have also been accused of intimidation tactics and violence.

Somkhele coal mine, in northern KZN, has been the site of one of the province’s most protracted struggles against mining. Tendele Coal, the company that owns the mine, wants to expand its operation, which would require residents to move from land belonging to a traditional authority which also falls under the Ingonyama Trust. The trust’s board chairman, Jerome Ngwenya, is a shareholder of the nearby Zululand Anthracite Colliery, and so indirectly stands to benefit from the further mining at Somkhele.

Residents have accused the local traditional council of using “terror tactics” to force them to sign compensation and relocation acceptance forms. Those who refused, claim they have been subjected to assassination attempts, death threats, their homes have been vandalised and shot at by rifle-wielding gunmen, and they have been told their names are on a hit list. With support from environmental groups, families facing eviction have lodged two court cases challenging Tendele’s operations.

Legislation that allows traditional authorities to make agreements without consulting communities compounds this problem. For example, the 1996 Interim Protection of Informal Land Rights (Ipilra) was established to protect the rights of traditional communities and requires majority consent for decisions regarding land use. However, the later 2002 Mineral and Petroleum Resources Development Act is often invoked to give mines the right to evict communities that were previously protected by Ipilra, or mining companies bypass the legislation altogether by negotiating lease deals directly with traditional authorities. Recently passed, regressive legislation such as the Khoisan and Traditional Leaders Bill and upcoming Traditional Courts Bill will give traditional leaders total power over their communities and write into law the existing practice of excluding communities from decision-making processes.

However, a landmark court case ruled in November 2018 that the Department of Mineral Resources and Energy (DMRE) has to obtain free, prior and informed consent from the community before granting mining rights in any area. The government announced its intention to appeal parts of the ruling. As many senior ANC leaders and government officials have extensive mineral interests, it remains to be seen how effectively this ruling will be enforced, as most rural communities have little access to the type of legal representation needed to take on the powerful mining lobby. In the meantime, mining-affected communities are increasingly under fire.

KZN has a long history of assassinations, linked to the taxi industry, corruption in local government and factional battles within the ruling ANC. Inequality and poverty-driven social instability are rising, and South African mines are frequently at the frontline of community frustration. The industry itself has noted increased opposition to its operations among neighbouring communities. Incidents such as roadblocks, hijacking of vehicles to transport protesters, arson, damage to property and labour disruption have reportedly almost doubled in some areas between 2018 and 2019. It seems that this conflict has evolved into deadly violence, making mining the new frontier of assassinations in KZN. DM

This article appears in the Global Initiative Against Transnational Organised Crime’s monthly East and Southern Africa Risk Bulletin. The Global Initiative is a network of more than 500 experts on organised crime drawn from law enforcement, academia, conservation, technology, media, the private sector and development agencies. It publishes research and analysis on emerging criminal threats and works to develop innovative strategies to counter organised crime globally.

On our shelves: Here’s a look at what RiverTown staff are reading in October.

Elevate Your Automotive Knowledge With This Porsche Design Hookah

How to use Google Kormo Android app, Google Pay Spot to find jobs in...

Amy Perez stresses that our bodies are ‘automobiles’ from God