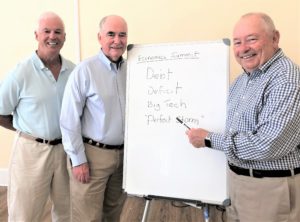 BY SUSAN HANAFEE – Four lifelong students of economics and finance will attempt to gaze into a crystal ball at the Friends of Boca Grande Economic Summit 2021 on March 4 and answer the age-old question: What is that light at the end of the tunnel?

“Consider our federal fiscal policy as a path or tunnel, and the light coming toward us is very attractive in the short-term but could become a freight train capable of great damage,” says John Kissinger, who is coordinating the program that features some of the island’s best economic minds.

“Our strategy at the moment appears to be an increase in speed along that path. When I say that to our group, most get depressed,” he adds, chuckling.

Kissinger and the three other speakers, Jim Runde, Jeff Swift and Bob Planer, have 125 years of business and financial experience among them. All are members of the Boca Economics Group, which meets once a month to study macroeconomics, the power of big tech, international trade, the economics of health care, climate and other critical issues.

The group will try to avoid jargon and going into the weeds on issues, Kissinger says. They may tiptoe around politics. But their bottom-line information on economics, the pandemic and power is bound to be riveting.

The event, which will be livestreamed starting at 3:30 p.m. is $35 or is included with the Friends@Home membership. Contact the Friends office for more information.

Kissinger’s focus will be on fiscal policy, including the publicly-owned debt of the U. S. federal government and the country’s capacity to service that debt. He notes that the essence of this issue is rightly captured in the old saying attributed to the late Senator Everett Dirksen: a million here and a million there and pretty soon you’re talking about real money.

“Now we are talking trillions … and stimulus packages that might be helpful in the short term but severely limit our options in the future,” says Kissinger, who spent 35 years in commercial banking. “We’ll try not to put a political spin on issues, but some things that will come up can be interpreted in different ways.”

Jim Runde, a Wall Street investment banker, author and corporate director specializing in strategic and financial advice, will kick off the event. He’ll focus on what he calls the “perfect storm” of challenges the country is facing: the pandemic, the broken basic economy and our polarized society.

The positive light at the end of the tunnel in regard to the pandemic may come at the end of July. That is when President Biden has said there will be enough doses to vaccinate every American against the virus. That will be helpful but not the end of the storm, Runde says.

“It was a scientific miracle to get the vaccine out in less than a year,” he says. “But the final mile has been a struggle for all kinds of reasons logistical and political.”

Fixing the broken basic economy won’t be easy either. It will take longer because of what Runde describes as the K-shaped recovery that is occurring. “The upward arm of the K is going great. That’s the people who have white-collar jobs and can work from home. If you are in the service business or the downward arm of the K, you are struggling. Same storm. Different boats. And as a result, the pandemic has magnified the wealth inequality in our country.”

Runde also will discuss what he thinks is the most challenging issue the country faces – a polarized society, which encompasses the concerns of the 74 million people that voted for Donald Trump for a second term as president.

“Those people feel threatened by globalization and the possibility that the digital economy will leave them behind,” Runde says. “They feel they have been disrespected in condescending remarks made by the elites. They also believe in small government. Those issues are not going away.”

Jeff Swift will follow Runde and Kissinger. He will deliver more eye-opening news about the digital economy, which has been the fastest growing segment of the overall economy and “with Covid became supercharged.

“Today a handful of top digital companies are worth more than the third largest economy in the world – Japan,” he explains. “When you have that much wealth there are a lot of good things that go with it, like teleconferencing, telemedicine and home delivery, to name a few. But it also has a seedy underside that has really started to show itself this last year.”

Swift, the Chairman of OBP Medical, Inc., will elaborate on the shabby components of the digital economy, which he defines as potential monopoly power that allows companies to acquire or abolish their competition, a social media driven by artificial intelligence and the influence being exerted by big-tech leaders.

“Mark Zuckerberg spent $400 million in ‘election assistance’ [this past election]. The average person can spend up to $2,800. Any more than that they risk being thrown in jail. Is the intent of our campaign finance laws being subverted?” Swift asks.  He hopes to shine a light on the growing influence a small group of mega-billionaires are now having on our democracy.

Swift also points out that every remedy to the seedy underside of the digital economy is likely driven legislatively, which is also a problem.  Fewer politicians are willing to risk challenging the mega-billionaires who increasingly control communications, news, censorship and campaign funding.

Bob Planer, the final presenter before the question-and-answer segment, will provide an update on the capital markets with some behind-the-scenes input from Mike Giobbe, a founder of the Economics Group.

Planer, who worked for Keefe, Bruyette & Woods, a brokerage house in New York City for 31 years, will recap the past year, discuss the current market situation and then touch on issues that are capturing headlines, like Bitcoin and Robinhood, the trading app popular with young investors that was involved in the recent GameStop Corp. buying/selling frenzy.

“My big concern is when everybody gets excited about the market, as happened with Robinhood, and thinks making money is easy, that’s when you find yourself at the top with nobody wanting to buy.”

More important he says are concerns around the giant deficit created by the Federal Reserve’s recent money policy and the fiscal stimulus and their impact going forward. “A lot depends on what happens with interest rates and the dollar,” Planer says.

While there are no future facts, the Economic Summit panel hopes to provide some information and insights into what we might expect at the end of the 2021 tunnel: a beacon or a train.

Pictured above are (from left) Jeff Swift, Jim Runde and John Kissinger Prepping for the upcoming Economic Summit 2021. Presenter Bob Planer is not pictured.  Photo by Susan

Wildwood man arrested after dragging police officer with his automobile

Government in no rush to grant ‘compulsory licences’