Dolce & Gabbana filed a defamation suit in an Italian court in 2019 seeking more than $600 million in damages from two American fashion bloggers, it has recently been revealed.

Dolce & Gabbana received widespread criticism when the company appeared to mock Chinese culture in an ad before a Shanghai fashion show.

The runway show was later cancelled after people across the world called it racist, retailers pulled Dolce & Gabbana merchandise and Asian VIPs disavowed the brand.

Scroll down for video 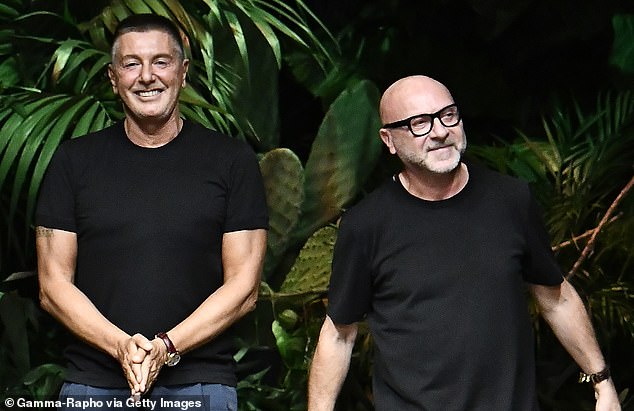 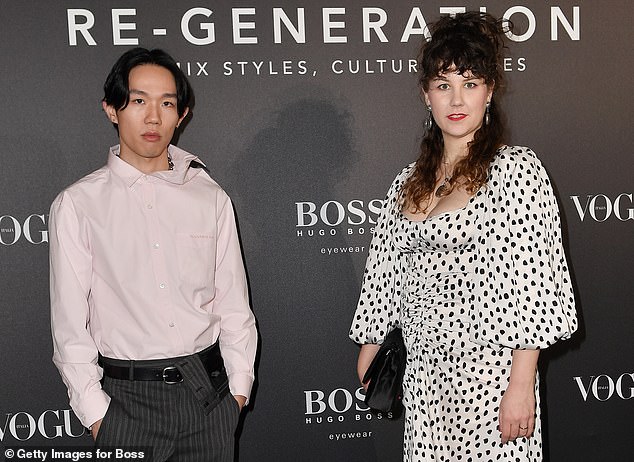 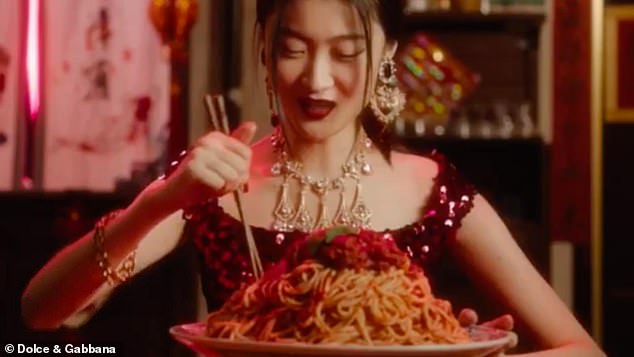 In the ‘racist’ ad, a woman eats a heaping pile of spaghetti with chopsticks – sparking backlash worldwide 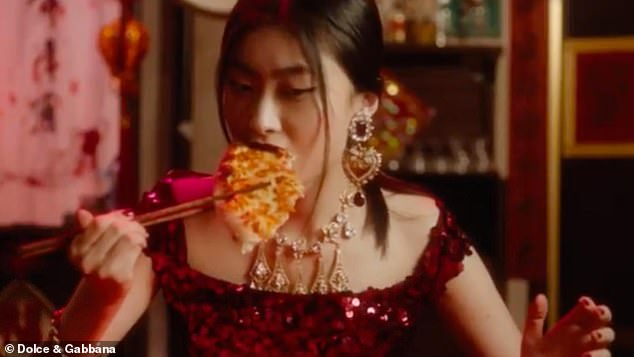 The woman also eats a piece of pizza with chopsticks in the ad, which led to the cancellation of a Shanghai fashion show

But before the show was called off, Gabbana’s account had allegedly sent a message to an Asian woman named Michaela Tranova, who shared them.

‘If the Chinese feel offended by a girl who spells pizza or pasta with chopsticks means that those Chinese feel inferior … and then it’s a problem not ours!’ Gabbana allegedly said in a message.

‘The whole world knows that the Chinese eat with chopsticks and that the Westerners with a fork and knife!!! Is this racism?? Hahahah you are not comfortable with the brain.’

Further in the conversation with Tranova, Gabbana allegedly said: ‘So you are racist because you eat dogs?’ 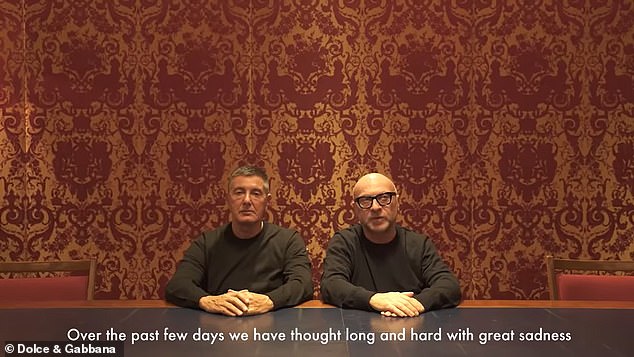 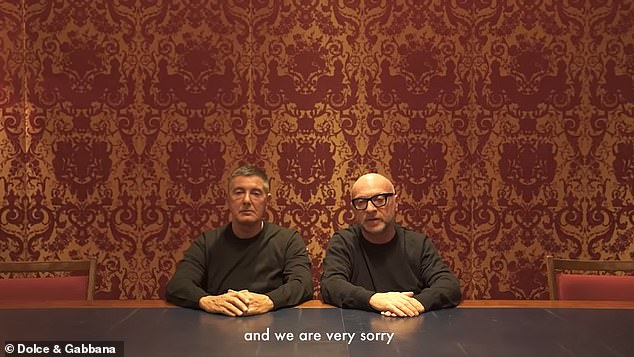 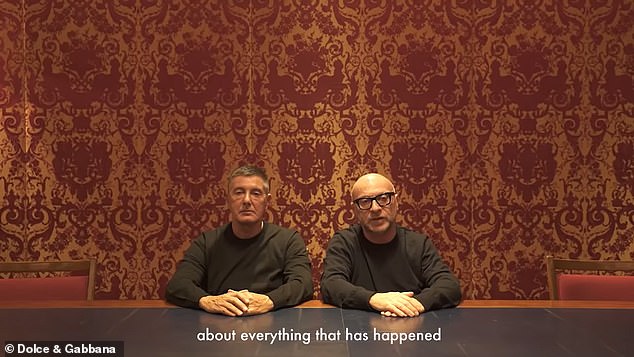 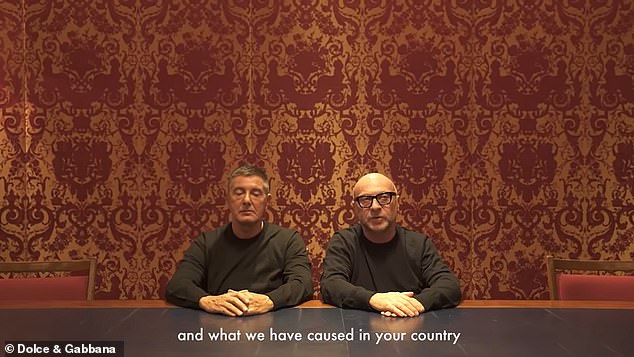 Domenico Dolce, right, and Stefano Gabbana, left, sat down to apologize in a YouTube video for the ad

‘All the worldwide know your attitude for excemple with the dogs!!!!! So at this point you are more racist than our. We celebrate the dogs we can not eat but we love and we live with,’ Gabbana allegedly said.

Diet Prada reposted the messages to its now 2.5million followers, receiving more than 57,000 likes on the post.

In a video message posted to YouTube in Italian, co-founder Domenico Dolce and Gabbana sat down to apologize for the ad but claimed Gabbana’s account had been hacked and he did not send the messages to Tranova.

The bloggers’ revelation led to a boycott by Asian consumers that the Milan fashion house alleges cost them millions in revenue. 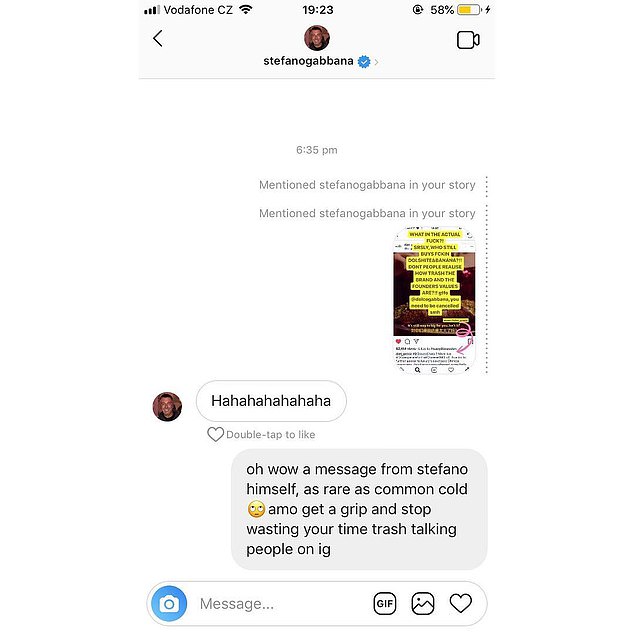 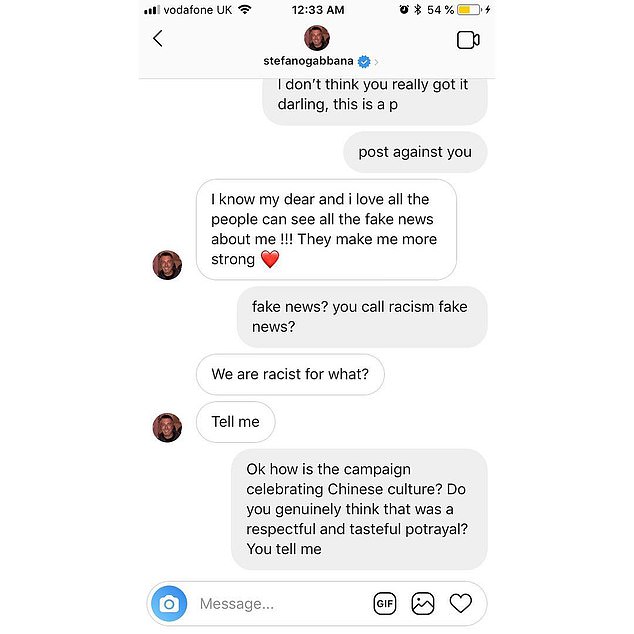 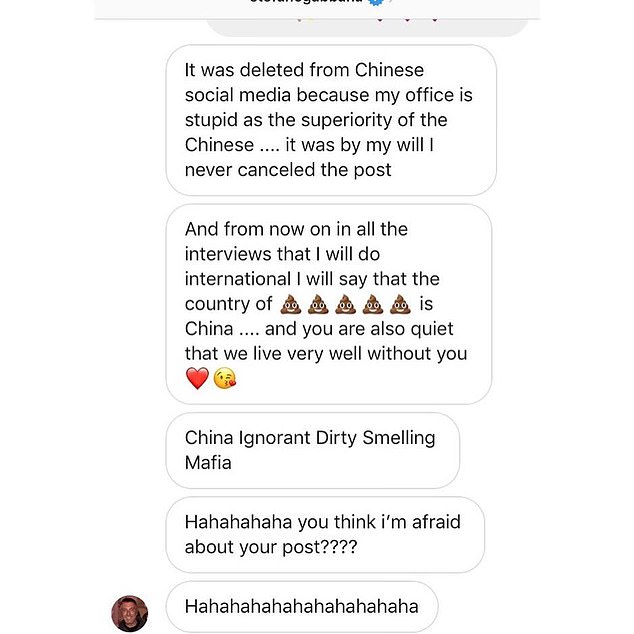 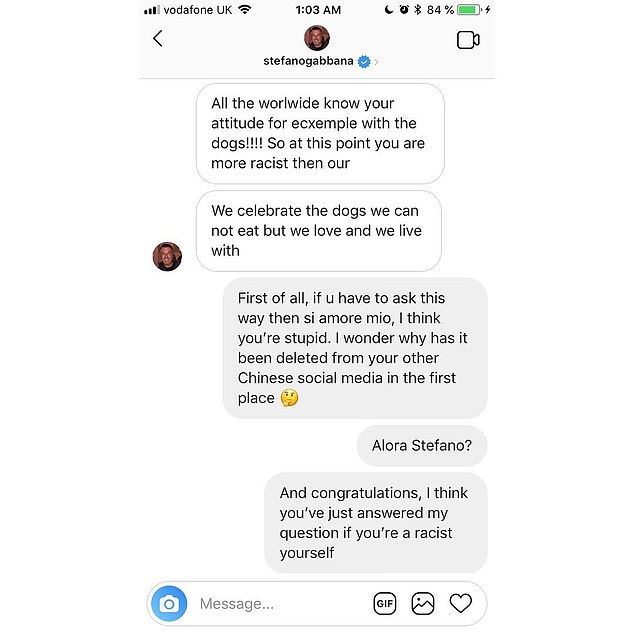 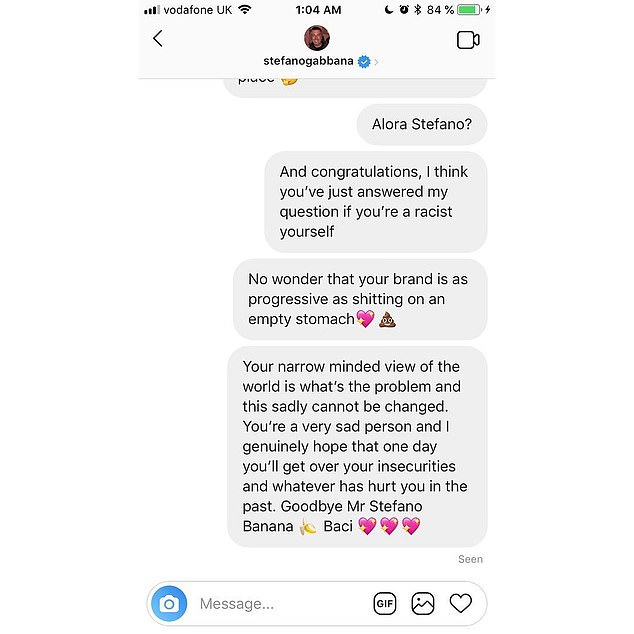 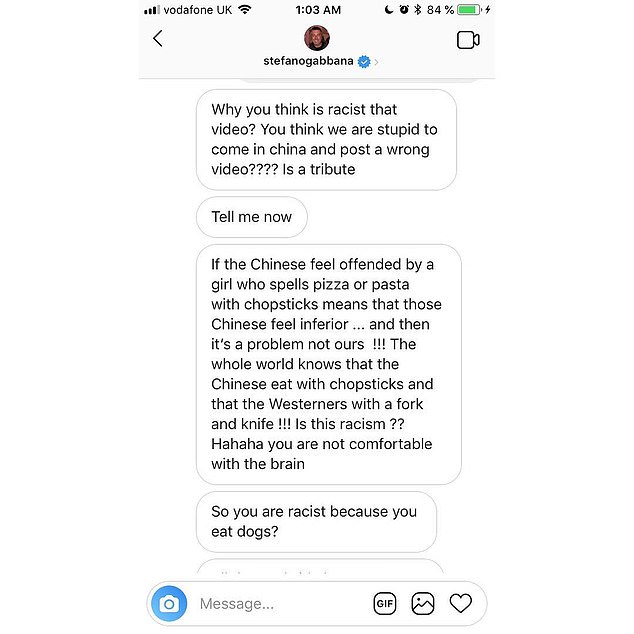 Gabbana’s account had allegedly sent a message to an Asian woman named Michaela Tranova, who shared them

The suit was filed in Milan civil court in 2019 but only became public this week when the bloggers posted about it on their Diet Prada Instagram account.

Their feed is widely followed in the fashion world for its cutting commentary on imitation in designs and on social issues.

‘On Monday, we filed a defense of our freedom of speech in answer to defamation claims brought in a Milan court from Dolce & Gabbana,’ Diet Prada posted.

In a caption accompanying the post, Diet Prada wrote that it is a ‘company co-founded by a person of color, trying to speak out against racism’ in its own community.

‘With so much anti-Asian hate spreading in the U.S., it feels wrong to continue to remain silent about a lawsuit that threatens our freedom of speech,’ Diet Prada wrote.

The post continued: ‘The lawsuit argues that we should be held responsible for lost revenue and other harm to Dolce & Gabbana and its co-founder Stefano Gabbana after we criticized their 2018 advertising campaign on Weibo for its stereotypical and sexist depiction of a Chinese woman, and revealed anti-Asian remarks originating from Gabbana’s Instagram account.’ 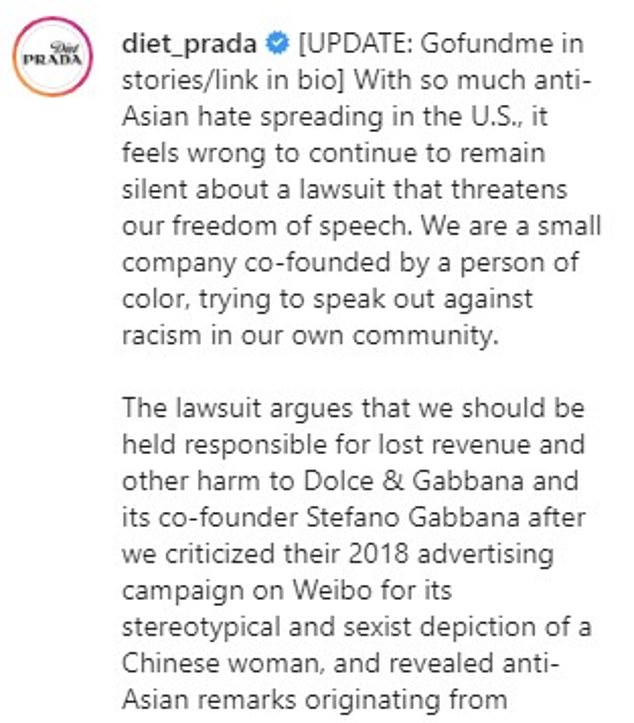 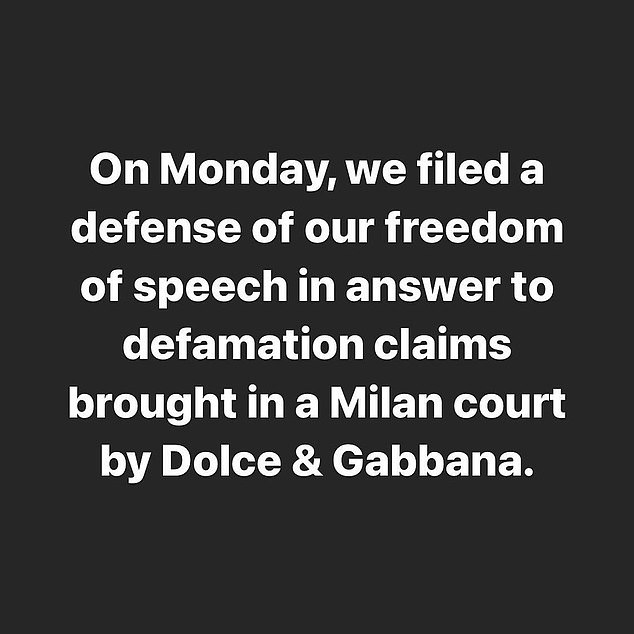 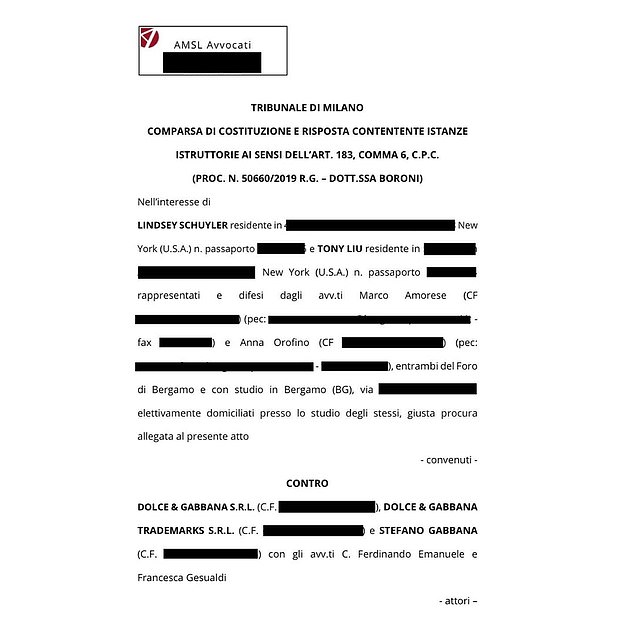 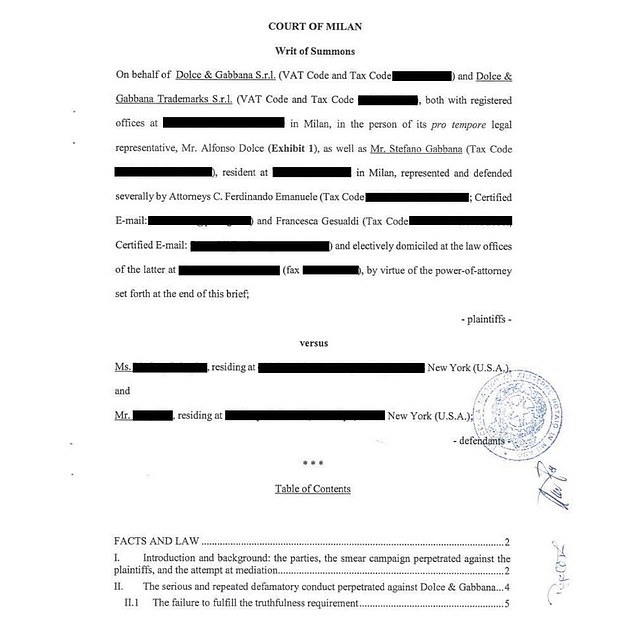 Diet Prada said that the nonprofit Fashion Law Institute, based at Fordham Law School, is coordinating its defense through its pro bono clinic in collaboration with Italian law firm AMSL Avvocati.

‘Having cultivated Diet Prada as a platform where we can denounce racism, amplify stories from the larger BIPOC community, and hold the fashion industry to a higher ethical standard, has been one of the most rewarding experiences thus far and our only hope is to protect that,’ Diet Prada wrote.

Susan Scafidi, director of the Fashion Law Institute at Fordham Law School, said: ‘This whole case is a way of trying to silence Diet Prada, and to silence Tony and Lindsay personally.’

She slammed the cognitive dissonance of releasing a public apology but filing a quiet lawsuit.

‘A public apology and a quiet lawsuit really cancel each other out in my mind,’ Scafidi told The Associated Press on Saturday.

Lawyers for Dolce & Gabbana reached by the AP declined to comment on the case. 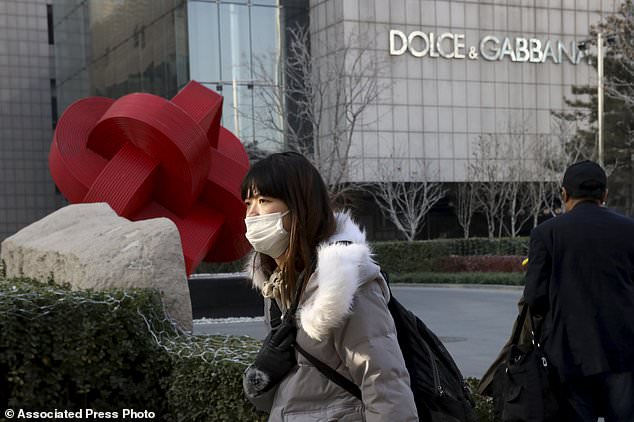 A woman walks past a Dolce&Gabbana retail outlet in Beijing, China. The Milan fashion house filed a defamation suit in an Italian court seeking over $600 million in damages 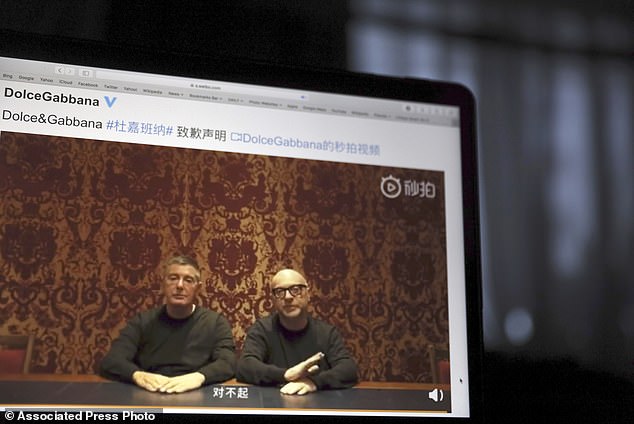 Italian defense attorneys filed a brief this week in Milan civil court, arguing that Italy is not the correct venue for the case, given that the blog is produced in the United States and the alleged damages occurred in Asia.

The fashion house is seeking damages totaling more than half a billion euros, Scafidi said.

She said the fashion house is seeking 450 million euros spent to restore brand image since 2018 and damages of 3 million euros for the company and 1 million for Gabbana, to whom the remarks were attributed.

Since going public, Diet Prada has raised more than $38,000 for its defense.

In a statement, Liu and Schuyler both said they would not allow their platform, which has also been vocal about the #MeToo movement, Black Lives Matter and recent attacks on Asians in the United States, to be silenced by lawsuits.

‘Diet Prada will continue to be a platform to elevate these crucial issues,’ Liu said.

Schuyler called on ‘public figures and brands to respond to public opinion and media critiques with progressive action, not lawsuits.’

Boomtown in Long Island: Six communities see median house prices surge as much as 82% in a year

Will Smith | Will Smith and Kevin Hart to star in Planes, Trains and...

Sushmita Sen is not just a person, she’s a vibe: Rohman Shawl