By Deborah Ross for Event magazine

The Life And Times Of Captain Sir Tom

I am old enough to remember a time when clothes were not throwaway items. Hems were taken up, hems were taken down. If we, as children, ever received a compliment from my mother it would be: ‘That’s worn well’, said with great satisfaction. A trip to C&A on Oxford Street was a thrilling day out, an event, as was any purchase, as it was so rare. I can recall getting new shoes and sleeping with them on my pillow so as not to be separated from their shiny, buttery, new leathery smell for a single second. We were recently looking through some old photographs, where it was pointed out to me that the dressing gown I had as a teenager is still the dressing gown I have today. For your information it is St Michael, as was. And when it was manufactured I’m assuming no one involved in its production said, ‘This will look lovely in a landfill in a few weeks’ time.’ 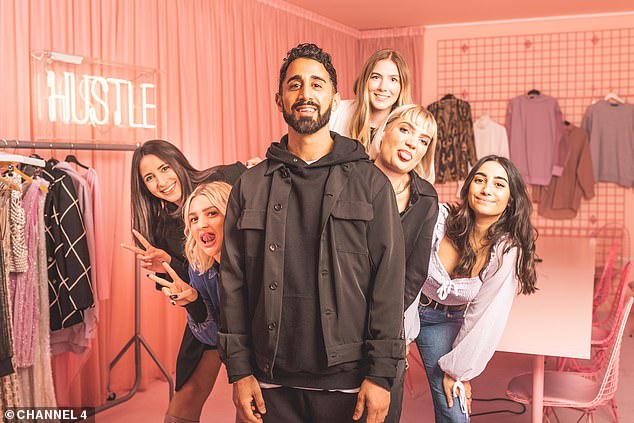 Missguided boss Nitin Passi and staff. This is pure PR. I suppose one should have expected as much, as why would Missguided agree otherwise?

But now we have fast fashion. I am well acquainted with fast fashion, as there’s a 20-something female in this household and I’m up and down all day taking in parcels from Asos or Topshop or Boohoo or whatever. As I march about in my 40-year-old dressing gown – it still washes well! – I try not to be too judgy. But mostly fail. ‘More tat you’ll wear only twice?’ I may say. Can’t help it.

So I thought I’d watch Inside Missguided, the new documentary series taking a look behind the scenes at one of fast fashion’s biggest players, in the hopes of getting more of a handle on this phenomenon. It is narrated by the company’s campaign manager Treasure (no surname), from their headquarters in ‘Manchesteeeeeeer!!!! It’s not glamorous, but it’s where the magic happens!!!! And we make millions every weeeeek!!!!’ Treasure is a loud, sweary blonde who, fair play, seems to work crazy hours while loving every minute of it as the company aims to become ‘bigger, better, sicker, faster!!!!!!’ than any of their many competitors. However, you can’t help but note the mission statement on the office wall that reads ‘to empower young women to look and feel confident on every occasion’ and wonder if this applies to the supply chain. Given the cost price of a dress is, as we later saw, £7.40, and given most factory workers are young women, I would guess not.

Based on the first episode (of four), this is pure PR. I suppose one should have expected as much, as why would Missguided agree otherwise? But it could have shown some spine, surely. There was no questioning at all. There was no mention of Kim Kardashian successfully suing them for knocking off her designs. There was no mention of the environmental damage. There was mention of the fact that the company lost £46 million in 2017/18 – hang on, aren’t we ‘making millions every weeeeeek!!!’ – but no mention of why. The CEO and founder, Nitin Passi, floated in and out yet was never asked where the clothes were made, by whom, and in what conditions.

Instead, this focused on their marketing strategy, which seems to depend on ‘influencers’ and trying to persuade Love Islander Molly-Mae to promote their clothes for six months. She was offered – wait for it – £350,000 plus a new Land Rover. Hang on. Have I been too hasty? Am I too old to be an ‘influencer’? St Michael is gone, but maybe I could suggest myself to Cotton Traders, say? I wouldn’t even demand the car. Just the cash would do.

The Life And Times Of Captain Sir Tom began with: ‘One day, a man went to walk to raise money for the NHS…’ and we know the rest. But are we tired of this story? Not at all. And this documentary on Captain Sir Tom Moore – he enjoyed being knighted ‘very much’ – was every bit as charming as Sir Tom himself. Actually, I knew he was a good man, had there been any doubt, when we saw him finish eating and then hold out his plate for the dog to lick. That is very much the measure of a good man, in my book. 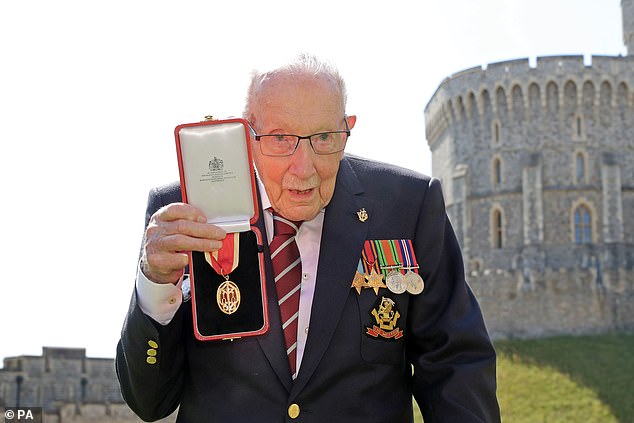 Captain Tom Moore, on the day he received his knighthood from the Queen. This documentary was every bit as charming as Sir Tom himself

Here, Sir Tom shared his life, from his ‘very happy’ childhood in Keighley, where his birthday present might be ‘a piece of wood and some nails and a hammer… or a bigger hammer.’ (Probably doesn’t shop at Missguided, our Tom). He talked about his wartime experiences in Burma (‘unpleasant’) and his love of motorbikes and his beloved wife, Pamela, who eventually suffered from a degenerative brain disease and whom he visited in hospital every single day, without fail, for five years until her death. Also the measure of a good man, in my book.

The one other talking head was historian Dominic Sandbrook, who put his popularity down to this: ‘People looked at him and said: “There is a Britishness that reminds us we will prevail.” He’s like a secular version of the Queen.’ Maybe she could boot out Prince Andrew and set him up in Royal Lodge Windsor? I think the nation could get behind that. Definitely.

The next chapter of Carla Zampatti’s fashion empire

Alia Bhatt shares a snap of her favourite person and it’s not Ranbir Kapoor...

Getting a jump on holiday shopping: We need a little Christmas