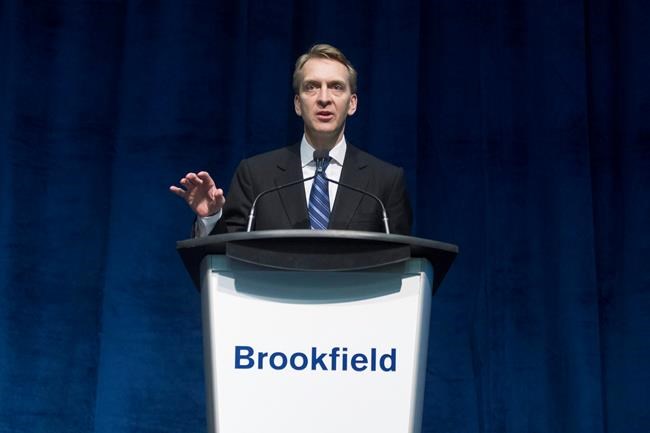 TORONTO — Brookfield Asset Management Inc. has assembled a huge pile of cash and funding commitments from its partners to take advantage of huge opportunities that will arise for it as a result of the COVID crisis, executives said Thursday

Chief executive Bruce Flatt told analysts Thursday that Brookfield currently has US$77 billion available to deploy as opportunities arise over the next 12 months as a result of the COVID-19 pandemic.

“The most important is that many countries around the world will have to off-load spending onto the private sector and sell assets,” Flatt said.

He said that bodes well for Brookfield’s infrastructure and renewable businesses, which make money from buying, selling and managing those types of assets for institutional investors such as sovereign wealth funds and pensions.

In addition, Flatt said Brookfield will be able to provide the private sector with capital that will be needed as governments around the world wind down pandemic programs.

Brookfield has several ways to fill that need, he said, including US$12 billion of commitments to a fund for buying discounted debt issued by financially distressed businesses.

Its flagship funds for property, infrastructure, renewable and private equity investments will also be in position to be buyers or sellers depending on the conditions, he added.

Brookfield said its infrastructure and renewable energy businesses are positioned to take advantage of two merging trends in communications and solar technology.

Bahir Manios, managing partner of the Brookfield infrastructure group, said “we’re currently witnessing a once in a 100-year investment upgrade cycle” as telecom operators replace old equipment with wireless and fibre networks to meet demand in an increasingly online world.

“Historically, these investments were funded by telecom operators. Given increasing demands on their capital, these operators are now seeking new funding partners,” Manios said.

In addition, Manios said, Brookfield sees an opportunity to supply some of the additional energy that will be required by computer data centres over the next decade — estimated at 30 gigagwatts (30 million kilowatts)

Earlier, the company reported a US$656 million net loss in its latest quarter, ended June 30, as it revalued its real estate portfolio lower amid the pandemic.

Brookfield holds large interests in several publicly traded partnerships, including a 53 per cent stake in Brookfield Property Partners, which reported last week that it had been significantly affected by closures in its hospitality and retail assets due to the pandemic.

The company, which keeps its books in U.S. dollars and has many operations outside Canada, said the loss attributable to shareholders amounted to 43 cents per diluted share.

A year earlier, it had a profit of $399 million or 24 cents per diluted share.

“The good news is that those operating businesses that were impacted are now all recovering, and the balance of the year should be better,” Brookfield said Thursday in a letter to shareholders.

This report by The Canadian Press was first published Aug. 13, 2020.

Google is threatening to pull its search engine from Australia. So what does that mean for you?

EDITORIAL: When Automobiles Ruled the Earth, Part One

Metal Products Market Has Greatest Demand From The Automotive Industry –...

Shortage of syringes challenges plans to get an extra dose of...