Asia’s garment manufacturers are reeling from the damage caused by the coronavirus pandemic. They suffered from restrictions and lockdowns in their own countries and saw international demand for their products collapse. This is particularly dramatic in countries where the textile sector accounts for a large share of all exports.

According to the ILO, around 65 million people work in the textile industry in these countries, or 75% of all textile workers worldwide. 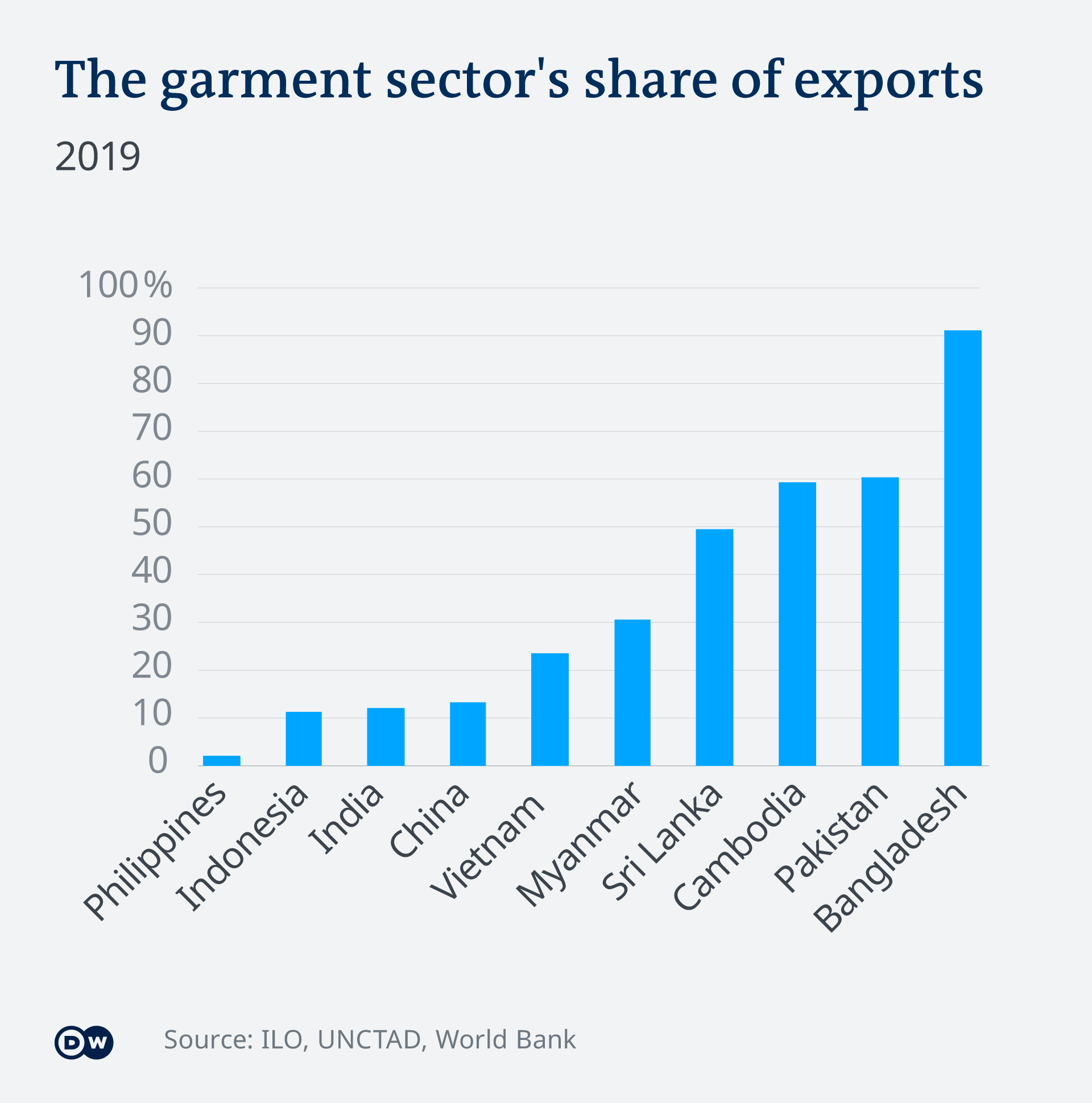 According to the study, the global textile trade collapsed in the first half of the year. Exports to the major buying regions in EU, the USA and Japan fell by up to 70%. At the same time, manufacturers’ supply chains were disrupted, with shortages of cotton, cloth and other necessary materials.

For the textile industry, this meant less work and less income. Thousands of factories were closed down, initially because of regulations to fight the pandemic, says Christian Viegelahn from the ILO’s office in the region.

“The typical garment worker in the region lost out on at least two to four weeks of work and saw only three in five of her coworkers called back to the factory when it reopened,” said Viegelahn.

Garment workers — most of them are women — suffered from significant income losses. In Bangladesh, the median income of textile workers almost halved between April and May, from the equivalent of $113 to just $65 (€95 to just €54) per month, according to a study cited in the ILO report. Median income means that half of the workers earn more, the other half less. 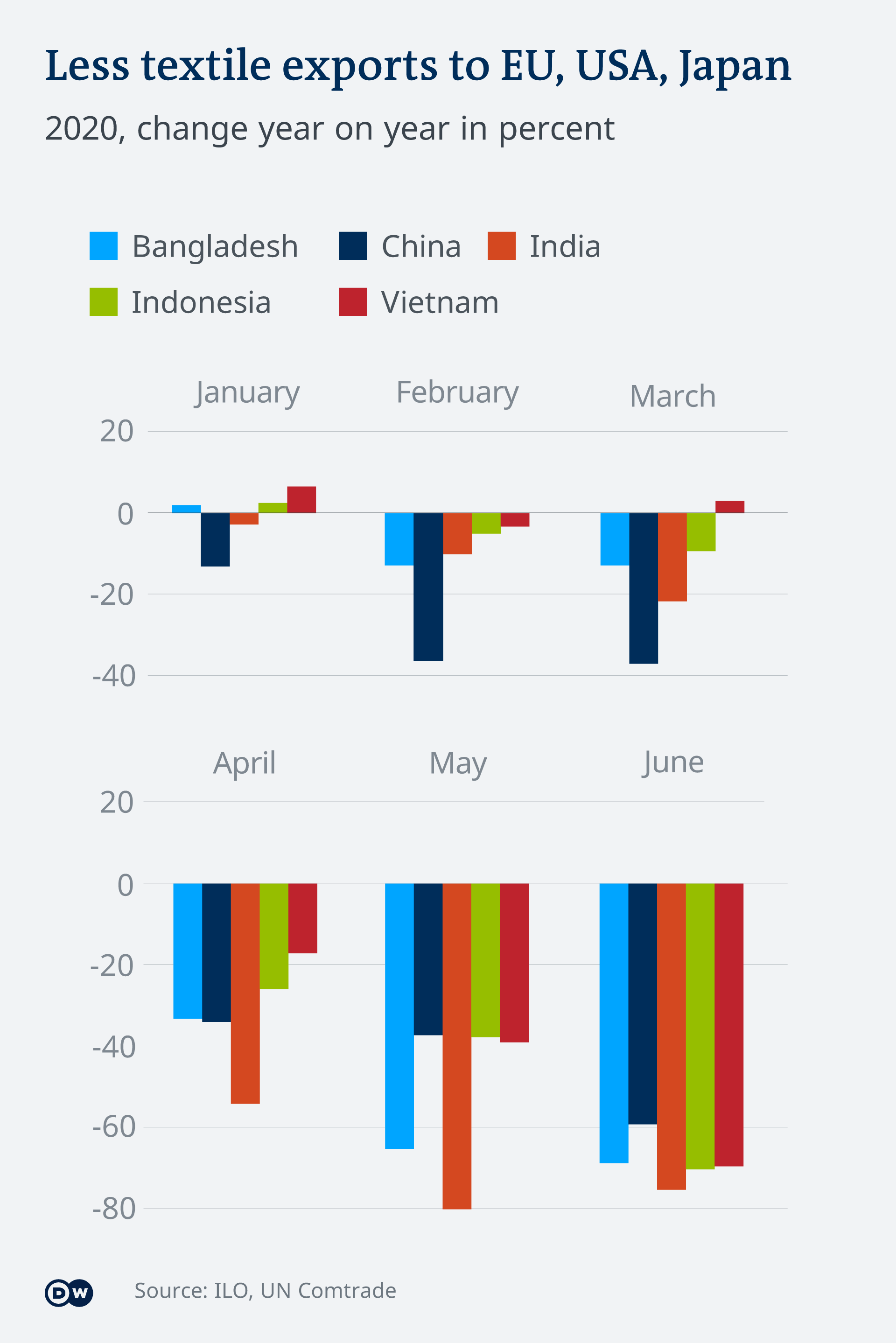 In addition, wages were often paid much later than the law permits. As a result, 77% of the Bangladeshi workers surveyed in June said they had eaten less than they should have because they could not afford to buy enough food. In May, protests of workers led to clashes with the police.

To soften the impact of the pandemic, most governments offered some form of help to factory owners and workers. In Cambodia, the government collaborated with employers to provide a $70 benefit to furloughed workers. But a study showed that only 41% of surveyed workers in May had actually received the full benefit.

The garment industry is the largest industrial employer for women in the Asia-Pacific region. In countries like Cambodia, Pakistan and Sri Lanka, between 15-20% of women work in the industry. 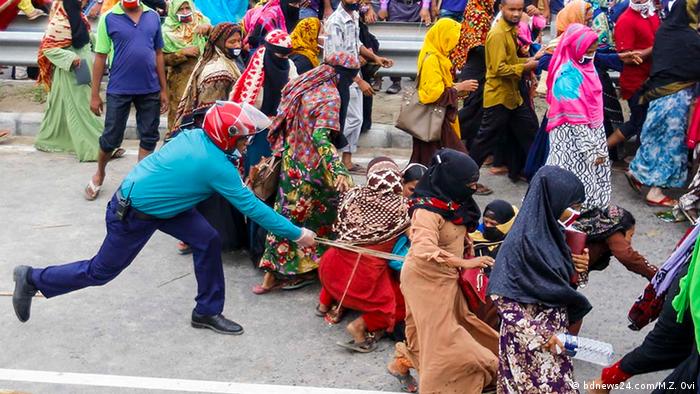 Garment workers in Bangladesh’s capital Dhaka took to the streets to demand payment of wages in May, police later dispersed them

Even before the coronavirus, women were usually paid less than men, worked longer hours and also took care of the household and children. “The pandemic has exacerbated preexisting inequalities,” the ILO report said.

Trade union membership tends to be generally low in the region, and in particular in the garment industry, according to the ILO. The report mentions unionization rates as low as 1% in Myanmar, 10% in Cambodia and 15% in Sri Lanka. According to the report, the restrictions imposed because of COVID-19 have further reduced union activity.

For the textile industry, the damage caused by the pandemic is already greater than the effect of the global financial crisis from 2008, said the ILO. “The depth of those declines and the speed and shape of the eventual recovery in the sector will likely not be (fully) visible until 2021 or 2022.”

In any case, ILO Regional Director Chihoko Asada Miyakawa hopes that the crisis will lead to a greater willingness to cooperate. “It is vital that governments, workers, employers and other industry stakeholders work together to navigate these unprecedented conditions and help forge a more human-centred future for the industry.”

How to shoot your beloved

Deroy Murdock: Democrats are to blame for 2020 post-election hanky-panky