An Armenian serviceman fires a cannon towards Azerbaijan positions in the self-proclaimed Republic of Nagorno-Karabakh, Azerbaijan, Tuesday, Sept. 29, 2020. Armenian and Azerbaijani forces accused each other of attacks on their territory Tuesday, as fighting over the separatist region of Nagorno-Karabakh continued for a third straight day following the reigniting of a decades-old conflict. (Sipan Gyulumyan/Armenian Defense Ministry Press Service/PAN Photo via AP)

Canada’s Armenian community is calling on Ottawa to ban the export of sophisticated Canadian drone technology to Turkey following reports that Ankara has deployed dozens of unmanned aircraft in combat against Armenian forces in the disputed Nagorno-Karabakh region of Azerbaijan.

Fierce fighting between Azerbaijani and Armenian forces erupted in the early hours of Sunday along the entire Line of Contact. The line has separated the two sides since a 1994 ceasefire paused the conflict over the breakaway Armenian-populated region.

Fighting raged for the third day on Tuesday between Azerbaijani and Armenian forces in the mountainous enclave. Dozens were killed and hundreds more injured in heavy clashes that involved the use of artillery, missiles, tanks, aircraft and combat drones by both sides.

Sevag Belian, executive director of the Armenian National Committee of Canada (ANCC), urged the federal government to “immediately halt all Canadian military aid to Turkey.” He also called on the Liberal government to condemn Azerbaijan’s actions.

“The attack is a pre-planned war against the peaceful civilians of Artsakh,” Belian said, referring to the Armenian name for Nagorno-Karabakh. “Recent public statements also indicate that the attacks are being carried out in cooperation with the Republic of Turkey. We require a stern condemnation of Azerbaijan’s actions.”

“Considering that those responsible for the genocide of 1915, the ultimate crime against humanity, have the audacity to return once more to continue to commit their unpunished crime of 1915 against Armenians, we are morally under the obligation to unite all our means, be it legal, political or financial, in order to support the people of Armenia and Karabakh,” the statement said, referring to the 1915 Armenian genocide in Ottoman Turkey.

“We, in particular, as Canadian citizens fully engaged in the wellbeing of our beloved and peace-loving country of Canada, expect our government to forcefully condemn the unjustified Azeri-Turkish aggression, which threatens the peace of an entire critical region of the world, as well as to demand the immediate cessation of all hostilities.” 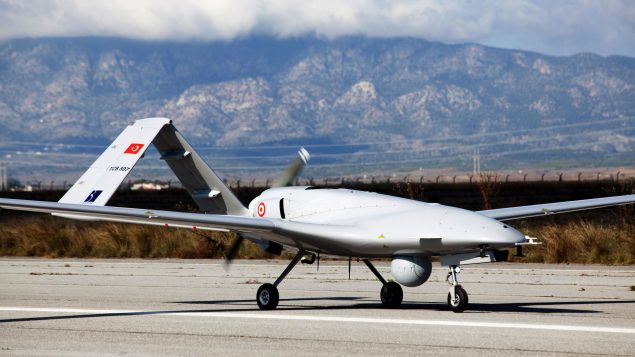 Canada’s Armenian community is joining disarmament group Project Ploughshares in calling on the federal government to ban the export to Turkey of Canadian-made WESCAM sensors and targeting systems. A Turkish Bayraktar TB2 drone is pictured with with its WESCAM MX-15D sensor and targeting system under belly. (Birol Bebek/AFP/Getty Images)

Armenia’s defence ministry reported this morning that a Turkish F-16 fighter jet based in Azerbaijan shot down an Armenian Su-25 close ground support aircraft deep inside Armenia proper, killing the pilot — a sign that the fighting is spreading and Turkish involvement is getting more serious.

Earlier, Armenia’s foreign ministry also reported the first death linked to the conflict in Armenia proper — a civilian it said was killed in shelling and drone attacks in the town of Vardenis, more than 20 km from Nagorno-Karabakh.

“Armenia should withdraw from the territories under its occupation instead of resorting to cheap propaganda tricks,” Altun said Tuesday.

For more than 30 years, Armenia has supported Nagorno-Karabakh Armenians in their fight for independence from Azerbaijan and eventual reunification with Armenia. Authorities in the Armenian capital of Yerevan have accused Ankara of direct involvement in the fighting on the side of their ethnic kin in Azerbaijan.

“Turkish military experts are fighting side-by-side with Azerbaijan, who are using Turkish weapons, including UAVs (unmanned aerial vehicles) and warplanes,” the Armenian ministry of foreign affairs said in a media statement Monday. 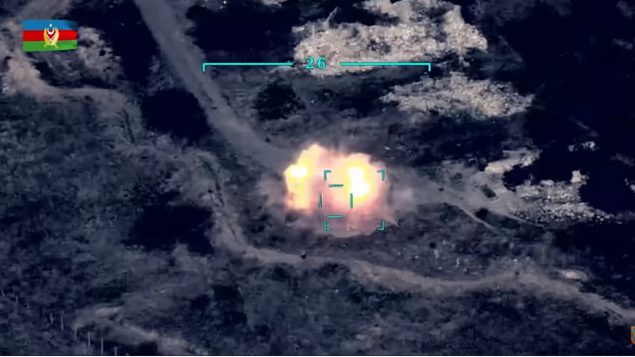 Kelsey Gallagher, a researcher with the disarmament group Project Ploughshares who has studied Canadian exports of drone technology to Turkey, said the drone footage released by the Azerbaijani military appears to show interface images that are identical to the Canadian-produced WESCAM optical sensors and laser targeting systems deployed on Turkish TB2 Bayraktar drones.

Last week, Project Ploughshares called on the federal government to ban exports of Canadian-produced sensors and laser targeting technology used on the Turkish military drones deployed by Ankara across several conflict zones in the Middle East and Libya.

Project Ploughshares said the multimillion-dollar exports of high-tech sensors and targeting technology produced by L3Harris WESCAM in Burlington, Ont. violate Canada’s domestic laws and its international obligations under the United Nations Arms Trade Treaty (ATT), which the Trudeau government agreed to almost exactly a year ago.

Officials at Global Affairs Canada said they are investigating claims that Turkey may have transferred military drones equipped with Canadian technology to Azerbaijan.

L3Harris WESCAM, the Canadian subsidiary of U.S. defence giant L3Harris, is one of the world’s leading producers and exporters of electro-optical/infra-red (EO/IR) imaging and targeting sensor systems, with approximately $500 million in annual exports, according to the Project Ploughshares report.

“These sensors are integral for their ability to conduct drone warfare, which they’ve done increasingly … in the past few years across several conflict zones,” Gallagher told Radio Canada International last week. “If the exports of these sensors were completely halted, then Turkey would not have the sensors necessary to conduct modern airstrikes.”

Exports of WESCAM sensor systems have continued despite Ottawa’s freeze on defence exports to Turkey, which was announced in October of 2019 after Ankara’s incursion into Kurdish-controlled areas of northern Syria, Gallagher said.

On Monday, Foreign Affairs Minister Francois-Philippe Champagne and his British counterpart Dominic Raab issued a joint statement saying they are “deeply concerned” by reports of large-scale military action along the Line of Contact.

“Reports of shelling of settlements and civilian casualties are deeply concerning,” the statement said. “We call for the immediate end of hostilities, respect for the ceasefire agreement and the protection of civilians. 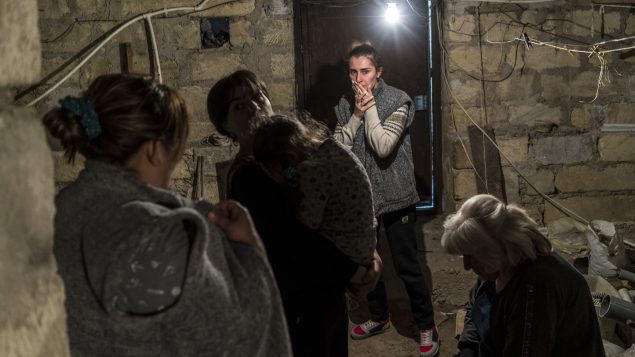 Residents shelter in a basement as air raid sirens sound on Sept. 29, 2020 in Stepanakert, Nagorno-Karabakh. A decades-old conflict between Armenia and Azerbaijan has reignited in the disputed region of Nagorno-Karabakh, recognized by most countries as part of Azerbaijan, but controlled by ethnic Armenians since a 1994 ceasefire. Dozens have been reported killed in the recent fighting, in which both countries blame the other for the escalation. (Brendan Hoffman/Getty Images)

Conservative foreign affairs critic Michael Chong said “there can be no military solution to this conflict.”

“Conservatives continue to monitor the conduct of the Turkish government, and we will be closely following the Liberal government’s handling of this situation as it develops,” he said in an emailed statement.

The Trudeau government needs to remind Turkey of its international obligations as a NATO ally, particularly when it comes to the alliance’s shared commitment to the international rules-based order, Chong added. 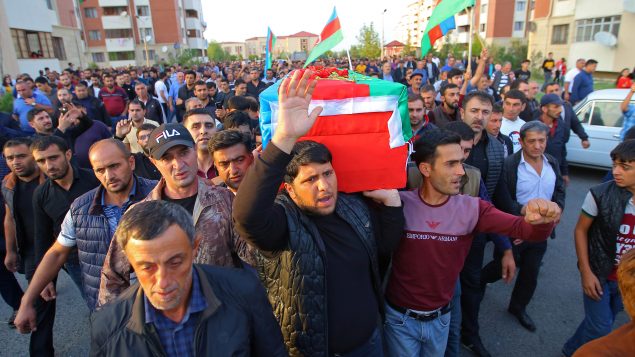 People carry the coffin of a member of Azerbaijani Armed Forces who was allegedly killed during the fighting over the breakaway region of Nagorno-Karabakh, during a funeral in the Tartar border district of Azerbaijan Sept. 29, 2020. (Aziz Karimov/REUTERS)

Officials at the Turkish embassy in Ottawa refused to comment on reports of Turkish drones with Canadian sensors being used by Azerbaijan, saying Turkey’s stance in the dispute over Nagorno-Karabakh “is in line with international law.”

“Armenia is an occupier of Azerbaijan’s lands. It has not only occupied Nagorno-Karabakh for decades but also conducted regular provocations against Azerbaijan,” the Turkish embassy said in an emailed statement.

“We condemn Armenian aggression in the strongest terms and call on all sensible nations to stand with Azerbaijan in its rightful struggle against foreign occupation and attacks.”

Officials at the Azerbaijani embassy in Ottawa did not respond to requests for comments by Radio Canada International.

When Will Disneyland Reopen, Resort Hotel Layoffs, and More – /Film

Kamala Harris isn’t the next big catalyst for tech stocks like Apple — this...

Honeywell fires up the H1, its second-generation quantum computer

Gucci is slammed for selling RIPPED tights for £146