The tech giants are trading at valuation ratios that are close to unprecedented for such large companies. Currently, Amazon (NASDAQ:) trades at a nosebleed price/earnings multiple of 122. Apple’s (NASDAQ:) multiple is 33 which is extraordinary for a hardware manufacturer. Netflix (NASDAQ:) clocks in at 84.

Tesla (NASDAQ:) leads the pack at 752, but that is largely due to its miniscule earnings. Overall, it is hard to look at these valuations without thinking “bubble.” But there is another interpretation.

Tech Giants Trading As If They Were Quasi-Bonds

At Cornell Capital Group we asked: What if the major tech giants (and I would exclude Tesla from this group) are trading as if they were quasi-bonds? That is a combination of their technology, their market power and the impact of COVID is such that their projected earnings are virtually locked-in. They are largely immune from the risk of competition and the fluctuations in the economy. If that were true, then the discount rate may be a good deal lower than that implied by traditional asset pricing models. To get an idea what this means, let’s go back to the basics.

The starting point for constructing any discount rate is the risk-free rate of interest. For valuing common stocks, this is taken to be a longer-term rate. The most popular choice is the . Exhibit 1 below plots the yield of the 10-year Treasury over the course of 2020. The exhibit shows that, and the government response to it, led to a decline in the yield from 1.88% at the start of the year to about 0.60% during the last several months. At that yield if one were to calculate a P/E ratio for the Treasury bond it would be 167.

Even if the earnings streams of the dominant tech companies are “bond like” they are still a good deal riskier than Treasury bonds. This means that the proper rate to discount their earnings is the Treasury yield of 0.60% plus a risk premium. The practical question is how big is the risk premium? Rather than try to answer that question directly, the approach taken here is to value two of the leading tech giants, Apple and Amazon, as a function of the discount so that readers can decide for themselves whether these companies are properly valued. 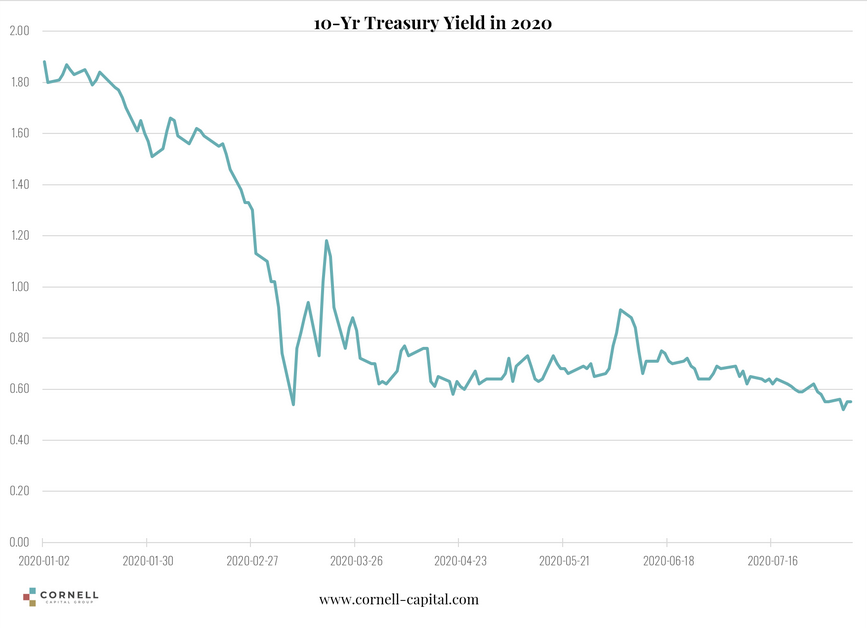 The starting point for the valuations are the free cash flow projections. I downloaded what I took to be consensus projections for Apple and Amazon’s free cash flow over the next ten years. The second step is estimating the continuing value at year ten. That depends both on the discount rate, still to be determined, and the growth rate in free cash flow following year ten. I use two growth rates, 3% and 4%. The 4% growth rate equals long-term real growth of 2% and inflation of 2%. It is the current consensus long-run outlook for the U.S. economy, and I assume that the tech giants can match that. The 3% growth is added as a more conservative alternative. 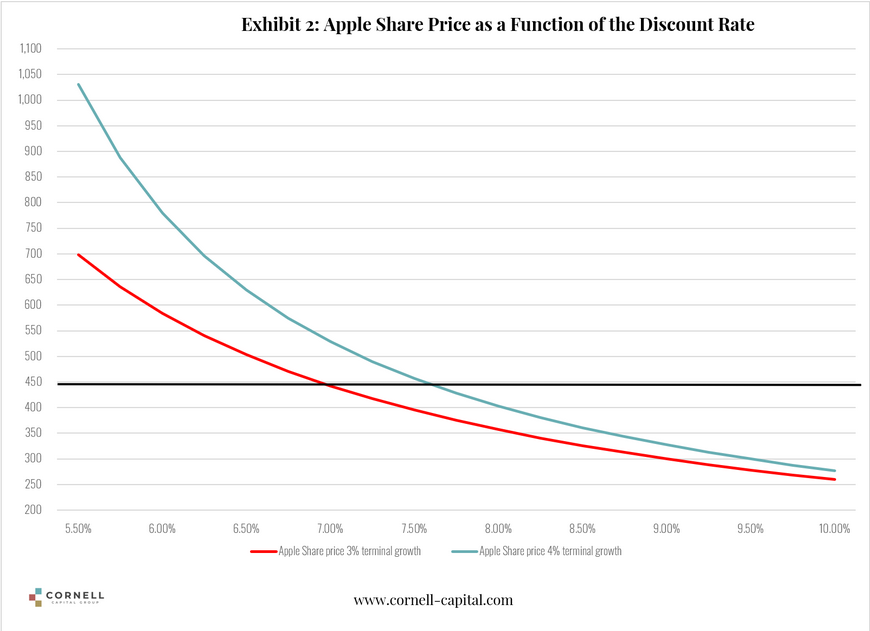 Apple Share Price as Function Of The Discount Rate

Had I used lower forecasts; the implied discount rates would be higher. Nonetheless, the analysis has two important implications for investors. First, even at today’s high prices the expected returns on Apple and Amazon are on the order of seven to eight percent. In a world where Treasury bonds offer less than one percent that is quite attractive. Second, if investors come to think of tech giant earnings as increasingly bond-like, prices could have a ways to run even from these high levels. If investors were willing to accept a 4% risk premium, for instance, prices of both companies would rise more than 50%. 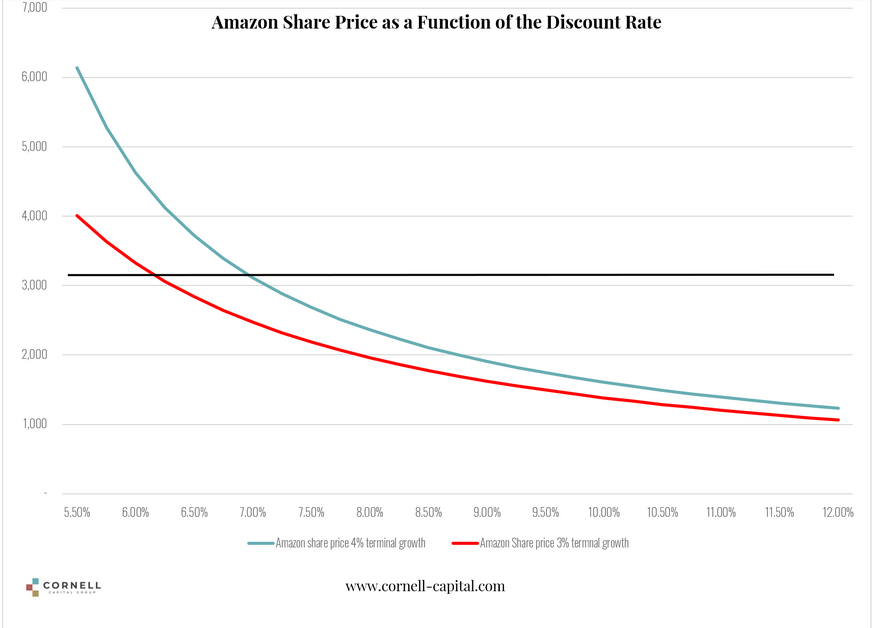 Amazon Share Price as Function Of The Discount Rate.png

The bottom line is that with an exceptionally low risk-free rate, the value of growing earnings streams become especially sensitive to the discount rate. If investors come to conclude that the tech giants can lock-in their current projected earnings, then their stock prices could rise further even without a change in earnings expectations.

Meet Texas Tech football’s 2021 early enrollees, including the potential QB of the future