We’re less than two weeks away from Apple (AAPL) reporting their 2020 Q4 earnings and I couldn’t be more excited. Prior to being a shareholder of AAPL I had written some articles explaining why I believed AAPL was one of the best individual equities an investor could own. As a current shareholder I am looking forward to closing out 2020 and getting into the 2021 fiscal year. Looking at the previous ten articles on Seeking Alpha one has been very bearish, two bearish, four neutral and three were bullish. I am perplexed that Apple has a Seeking Alpha Authors Rating of neutral and only three of the past ten articles were bullish.

I think many people are underestimating multiple catalysts which in my opinion will drive the share price higher. The iPhone 12 will create a super cycle which should last for years, were heading into AAPL’s strongest quarter with the holiday season quickly approaching, Services has taken on a life of its own, India has the second largest population and it could become a gold mine for AAPL’s revenues and the psychology of work has changed creating a stronger demand for the latest products. There are many tech companies people feel are overvalued and while I agree with some AAPL shouldn’t be on that list. I wouldn’t bet against a company that since fiscal year 2015 has generated over $200 billion in revenue and $45 billion in net income consecutively. AAPL has bought back stock every year since 2012 and each quarter since Q1 2018. I would speculate that this trend will continue and I will continue to be bullish on AAPL until there is a logical reason not to be.

The iPhone super cycle is going to supercharge Apple’s revenues

AAPL’s event on 10/13/20 introduced the much anticipated iPhone 12 and four models to cover a wide range of price points. On 10/17/20 Gene Munster from Loop Ventures who is a reoccurring guest on CNBC published some interesting analysis about the impact of the iPhone 12. In the forecast Loop Ventures believes the iPhone 12 family of phones will create a three year upgrade cycle rather than the normal one year duration. Loop Ventures discussed length of ownership and speculated that iPhone owners have held their devices longer than in the past and that the number of iPhones which are three years or older has increased by 90 million units in 2020. I personal fall into this category as I still have the iPhone 7 Plus which was released on 9/16/16. I opted to wait for the iPhone 12 due to 5G than upgrade when the X and 11 launched. I completely agree with Loop Ventures theory and feel there are many others which have waited for a 5G iPhone prior to upgrading. Loop is also forecasting 15% iPhone unit growth for next fiscal year compared to 1% in 2020. 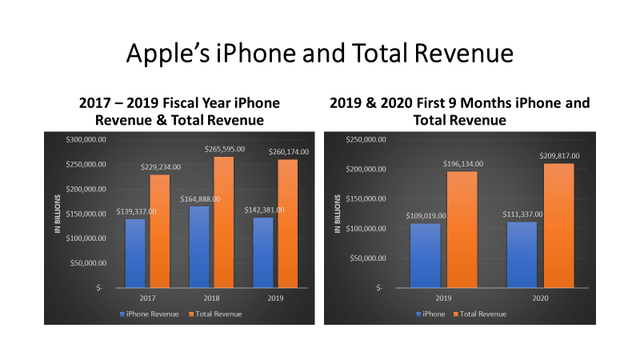 With 1.38 billion people living in India it’s currently the second largest population behind China and more than four times larger than the United States. India had a rule where it required foreign retailers such as AAPL to source at least 30% of the raw materials locally to sell their products within the country. This limited exposure to the second largest population as AAPL’s only option was to rely on third party resellers which often increases prices. Recently the Indian government relaxed some of its rules which specifically applied to foreign companies conducting business in India opening the door for AAPL.

In September of 2020 AAPL launched its online store in India allowing them to sell directly to consumers and reducing their dependence on 3rd party retailers. I believe this will be critical to cracking the $300 billion revenue mark for AAPL as they now have access to another of the world’s largest economies. Tim Cook AAPL’s CEO recently discussed plans to open up the first brick and mortar store in India during 2021. AAPL’s India I Store is live and the iPhone 12 will be available directly from AAPL starting on 10/30/20 in India.

Currently Chinese smartphones which are cheaper alternatives to the iPhone account for roughly 72% of India’s smartphone market. India’s market could become a printing press for revenue as almost 700 million of its population are currently internet users and almost the same number of people have yet to come online for the first time. Pricing has been AAPL’s largest barrier of entry as they have captured less than 2% of the smartphone market. The average annual wage in India is equivalent to $2,000 U.S dollars making high end iPhones out of reach for a large portion of the population. AAPL currently manufacturers the iPhone SE and the iPhone 6S which are still out of reach for many with pricing at $430 and $270 compared to the countries average smartphone price of $160.

I believe pricing is a short-term headwind for AAPL. They are committed to this market and investing the capital to making it successful. I believe AAPL will find a way to lower manufacturing costs by sourcing some of the materials locally, investing in its manufacturing plants locally and selling direct to the customer. AAPL could also take the approach of breaking even or taking a loss on the products it sells for a period of time to increase its foothold in the market. The iPhone isn’t a one trick pony as it is still a revenue generator through services after the consumer purchases it. Having more iPhones in the market also increases the visibility of AAPL’s brand in India which is important for their other products.

From 2010 – 2017 the average GDP growth rate of India was 7.26% compared to 2.15% in America. India is a long-term play for AAPL and they are playing the long game here. This is an investment that needs to be looked at with a 5-10 year time horizon. Over time AAPL should be able to offer more cost effective pricing on its products while the GDP in India continues to grow. As the average wage increases while AAPL’s pricing decreases its products will become more accessible. I believe APPL has the capital, infrastructure, expertise and time to make the investment in India pay off in spades.

AAPL’s Services business segment is currently AAPL’s second largest revenue producer behind the iPhone. For the fiscal year of 2019 Services generated $46.29 billion in revenue which was 17.79% of AAPL’s total revenue for the year. Services has seen remarkable growth for a business segment which generates tens of billions of revenue on an annual basis. In 2016 Services grew year over year by 22.30%, in 2017 by 34.30%, in 2018 by 21.55% and in 2019 by 16.46%. Fiscal year 2020 is turning out to be another double digit year for revenue growth in services as the first nine months has seen a 16.10% increase from the same period in 2019.

At AAPL’s recent event they announced two new services. Fitness+ which will be available by the end of 2020 and will cost $9.99 per month. Apple One will be a combination of services which will start at $14.95 per month for a handful or services and will expand to $29.95 per month for a package which includes all of them. I think Apple One will be a hit as many people will be willing to pay for one of the packages to get multiple services from AAPL. I believe there is a large community which will also pay for the Fitness+ subscription due to the shift in the fitness space.

I have previously stated that in time Services has the potential to become AAPL’s largest business segment by revenue. After reviewing how much revenue Services generates and its growth rate year over year I think that Services could be valued at $500 billion and has the potential to be a $1 Trillion standalone business segment in the future. I am basing these numbers off of Tesla’s (TSLA) current valuation. Regardless if you agree with the valuation the market has given TSLA the facts are that as a company its market cap is just over $409 billion. 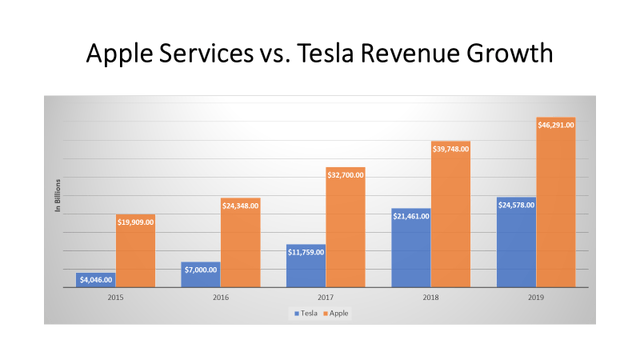 I am expecting that AAPL will beat on both revenue and EPS estimates in their upcoming Q4 report. I think we will see strong adaptation for new hardware as work from home and virtual learning have become a reoccurring theme in 2020. I think Services will finish with a year over year growth rate above 15% which is hopefully closer to 20%. I think AAPL will announce strong preorder sales for the iPhone 12 family as there was pent up demand for a 5G iPhone. I am also expecting that AAPL will disclose how much stock it bought back and give an idea of where they are on the current buyback program.

I disagree with the bullish outlooks some have on AAPL. I recently added AAPL to my tech portfolio and now own all the FAANG stocks except Netflix (NFLX). AAPL is a stock you should just own and add where opportunities present themselves. I am not sure if there is another company in the history of the stock market which has bought back more shares of its own company than AAPL and returned more to shareholders in the forms of buybacks and dividends. 5G, Services and India should present more than enough opportunities to drive AAPL’s price higher. I don’t see AAPL’s innovation slowing down anytime soon and with AR, VR and AI being the next evolutions in tech I believe there is a ton of future growth left for AAPL. I am planning on holding AAPL for the long haul the same way I have held other FAANG stocks. I do believe shares of AAPL can increase by 35% by Thanksgiving 2021 and wouldn’t be surprised if that number is higher.

Disclosure: I am/we are long AAPL. I wrote this article myself, and it expresses my own opinions. I am not receiving compensation for it (other than from Seeking Alpha). I have no business relationship with any company whose stock is mentioned in this article.

Additional disclosure: Disclaimer: I am not an investment advisor or professional. This article is my own personal opinion and is not meant to be a recommendation of the purchase or sale of stock. Investors should conduct their own research before investing to see if the companies discussed in this article fits into their portfolio parameters.