Academy Sports and Outdoors (ASO) has filed to raise $250 million in an IPO of its common stock, according to an S-1 registration statement.

ASO’s IPO valuation appears reasonable, the firm is weathering the Covid-19 pandemic quite well, is a dominant retailer in the Southern U.S. and is producing enviable profits and cash flow, so is worth consideration.

Katy, Texas-based Academy was founded in 1938 as a family business to sell outdoors goods and sporting products to consumers in the U.S.

Management is headed by president, CEO and Chairman Ken Hicks, who has been with the firm since May 2017 and was previously president and CEO of Foot Locker and has held senior roles in several consumer goods retailers.

Below is a brief overview video of about canoeing and hiking in N. Carolina:

ASO currently has 259 stores in 16 contiguous states in the Southern region of the U.S.Its retail locations range from 40,000 to 130,000 square feet in size, with an average size of 70,000 square feet. Stores are not located in malls.

Notably, the firm’s stores have remained open during the Covid-19 pandemic.

Academy also operates three distribution centers and also sells online via its e-commerce platform, which contributed 11% of the company’s sales in the first half of 2020.

Academy has received at least $1.1 billion from investors including private equity firm KKR

The company markets its stores via offline and online media as well as local events specific to each area, including supporting local sports teams, programs and civic organizations.

The firm also has invested in its e-commerce capabilities as part of an omnichannel approach.

Selling, G&A expenses as a percentage of total revenue have been dropped as revenues have increased, as the figures below indicate:

The Selling, G&A efficiency rate, defined as how many dollars of additional new revenue are generated by each dollar of Selling, G&A spend, rose to 0.7x in the most recent reporting period, as shown in the table below:

According to a 2016 market research report by Grand View Research, the global sports equipment marked was an estimated $66 billion in 2016.

The main drivers for this expected growth are a rising awareness of the health benefits from consistent physical activity and improvements in sports equipment materials and technologies.

Also, below is a chart showing the historical and future forecast growth trajectories of various subcategories in the North American sports equipment market: 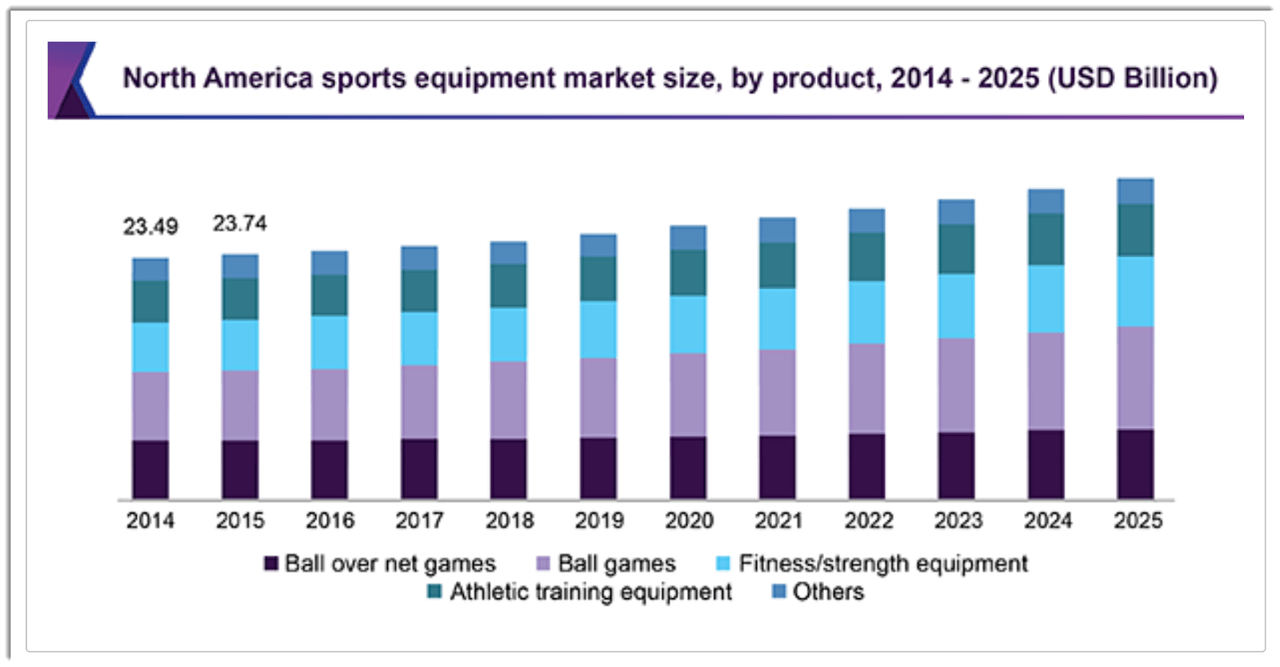 Major competitive or other industry participants include:

Academy’s recent financial results can be summarized as follows:

Below are relevant financial results derived from the firm’s registration statement:

Academy intends to raise $250 million in gross proceeds from an IPO of 15.625 million shares of its common stock, offered at a midpoint price of $16.00 per share.

Assuming a successful IPO, the company’s enterprise value at IPO would approximate $2.0 billion, excluding the effects of underwriter over-allotment options.

Excluding effects of underwriter options and private placement shares or restricted stock, if any, the float to outstanding shares ratio will be approximately 17.73%.

Management says it will use the net proceeds from the IPO as follows:

We intend to use these proceeds for general corporate purposes, which may include the repayment of certain indebtedness.

Management’s presentation of the company roadshow is available here.

Academy is seeking public capital market funding most likely to pay down debt.

The company is private equity firm-owned, so KKR probably received large ‘dividends’ and the company loaded up on debt ($1.4 billion) in the process.

Otherwise, the firm’s operating financials have been impressive in the most recent six-month period, especially since it has been open for business during the Covid-19 pandemic.

However, prior to that, revenue growth was an unimpressive 1.0%, although the company sharply grew its net profits and operating cash flow.

Selling, G&A expenses as a percentage of total revenue have dropped; its Selling, G&A efficiency rate has risen sharply. Again, both of these figures are for the most recent six-month period, which may be an anomaly.

The market opportunity for selling sporting and outdoors goods is expected to grow at a moderate rate of growth, but there are plenty of well capitalized competitors in the space.

As to valuation, compared to Dick’s Sporting Goods, the IPO is priced well below DKS’ figures for major metrics, with only slightly less revenue growth and somewhat lower earnings per share.

The IPO valuation appears reasonable, ASO is weathering the Covid-19 pandemic quite well, is a dominant retailer in the Southern U.S. and is producing enviable profits and cash flow, so is worth a close look.

Members of IPO Edge get the latest IPO research, news, and industry analysis. Get started with a free trial!

Disclosure: I/we have no positions in any stocks mentioned, and no plans to initiate any positions within the next 72 hours. I wrote this article myself, and it expresses my own opinions. I am not receiving compensation for it (other than from Seeking Alpha). I have no business relationship with any company whose stock is mentioned in this article.

Is a bounceback on the cards for these UK funds and investment trusts?

Is the Stock Market in a Bubble Right Now? Investor Jeremy Grantham Says So. Is He Right?

‘People before patents’: Academics, researchers and…

Puffy dress made by trendy brand NU has been mocked because...