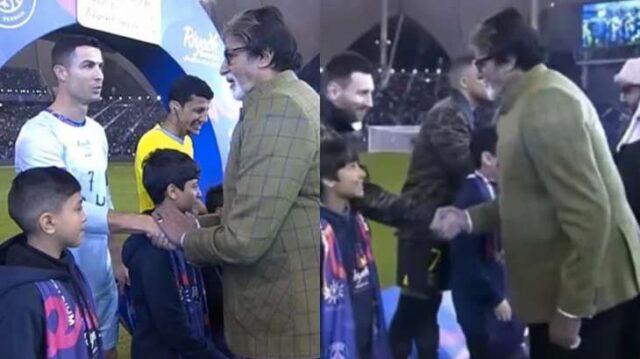 Bollywood megastar Amitabh Bachchan was in Saudi Arabia on Thursday where he inaugurated a football match. The veteran actor was invited as the chief guest to inaugurate the high-octane face-off between Cristiano Rolando’s Riyadh XI and Paris Saint-Germain (PSG)-led by Lionel Messi at the King Fahd International stadium. Big B took to his Instagram to share videos and photos from the friendly match in which he can be seen shaking hands and interacting with legendary football players like Messi, Ronaldo, Mbappe and others. Calling it an “incredible” experience, Big B said, “An evening in Riyadh .. ” what an evening .. Cristiano Ronaldo, Lionel Messi, Mbape, Neymar all playing together .. and yours truly invited guest to inaugurate the game .. PSG vs Riyadh Seasons .. Incredible !!!”

Reacting to the post, many Bollywood celebrities dropped their comments on Big B’s videos and photos. Dino Morrea said, “Wowwwwwwwwwww Just Wowwwwww. Amazing. Love it.” He also wrote, “fantastic What a beautiful experience. They got to meet you.” Virat Kohli commented, “Amazing.” Neil Nitin Mukesh said, “What an iconic moment.”

Amitabh Bachchan had also shared some pictures on his blog in which his kids Abhishek Bachchan and Shweta Bachchan Nanda can also be seen accompanying Big B to the gulf nation. Shweta also shared some photos from the match on her social media.

Meanwhile, the friendly football match marked Cristiano Ronaldo’s first game since signing a contract with Saudi football club Al Nassr. He exited Manchester United last year after the FIFA World Cup. During the match, Messi and Ronaldo each scored in an eventful 5-4 Paris Saint-German victory over Saudi All-Star XI. Thursday’s game was the first match-up between the two football titans since 2020 and the 37th time in their careers. It could be the last time that they meet on the pitch.

On the other hand, on the work front, Amitabh Bachchan was recently seen in the family entertainer film ‘Uunchai’ along with Anupam Kher, Parineeti Chopra and Boman Irani. Helmed by Sooraj Barjatya, the film got positive responses from the audience. He will be next seen in ‘The Intern’ along with Deepika Padukone and in a Pan India film ‘Project K’ alongside Deepika Padukone and Prabhas.

Adani Enterprises to be dropped from Dow Jones sustainability indices