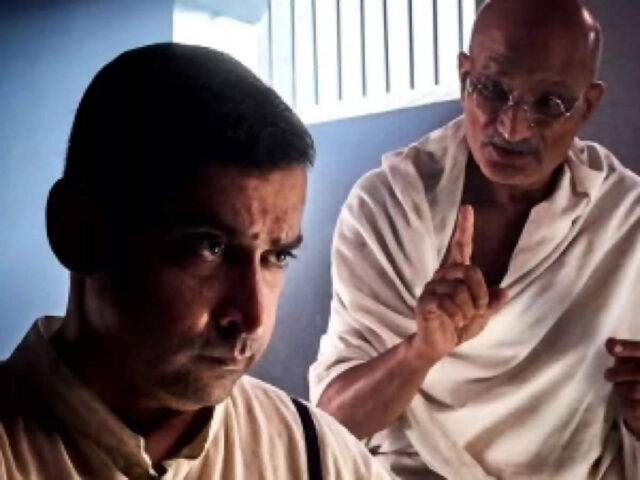 A press conference was held for ‘Gandhi Godse: Ek Yudh’, and a few unknown protestors suddenly erupted the press conference. ‘Gandhi Godse: Ek Yudh’ showcases the ideologies of both Mahatma Gandhi and Nathuram Godse and for the first time also gives us Godse’s perspective. The protestors hence demanded that the makers should not release the film which allegedly shows Gandhi in a poor light.
The press conference was held to showcase some unseen footage and dialogues from the film. The protestors sitting amidst the media started shouting slogans against the film and alleged director Rajkumar Santoshi that he’s trying to glorify Nathuram Godse.

The protestors further said that the film demeans and undermines the efforts of Mahatma Gandhi who played an important role in the freedom struggle of the country while it glorifies the murderer Nathuram Godse and hence they are against the release of the film.

In an exclusive interview with Etimes, filmmaker Rajkumar Santoshi had said that it’s not a propaganda film. He had explained, “I love the people of our country, I trust them and their judgment. I have made this film for them. Having said that, we can’t deny the fact that Godse’s voice was suppressed for 70 years. Jab koi baat ko dabaya jata hai, ya woh chupayi jati hai, toh phir woh baad mein fat thi hai. The truth erupts violently. In my research and writings on Godse, I found out that he didn’t even advocate violence. It’s important that his voice be heard. Sunn lete hain na, kya harz hai? Let’s form our opinions after hearing his story. I am confident that I have made a good film.”

‘Gandhi Godse : Ek Yudh’ is about to release across the country on the occasion of Republic Day on January 26.

Is India’s rapidly growing youth population a dividend or disaster?