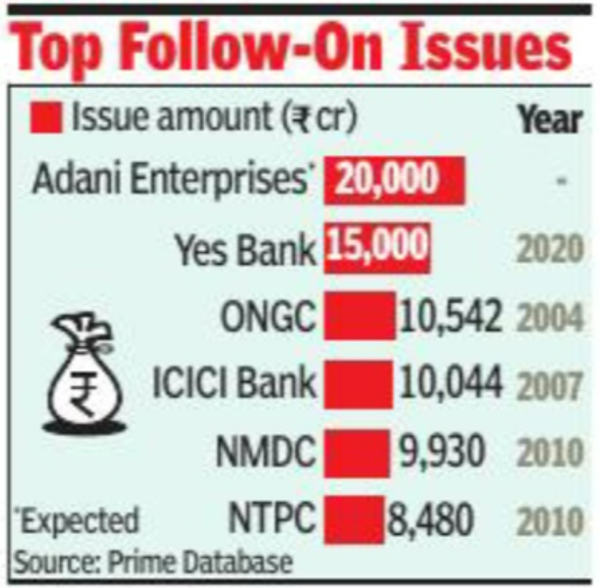 MUMBAI: Adani Enterprises, the flagship of Adani Group, will raise Rs 20,000 crore through a fresh issue of shares. This will make its follow-on public offer (FPO) the largest in India, dwarfing the previous record set by Yes Bank’s Rs 15,000-crore FPO in July 2020.
The fund-raise programme, to be launched this fiscal, will help Adani Enterprises finance new investments and improve its balance sheet. Significantly, the FPO – through which new shares are allotted to investors – will diversify the company’s shareholder base, improving its trading liquidity.
The promoters, billionaire Gautam Adani and his family, own about 73% in the flagship, while the public holds the remaining 27%. However, within the public shareholder group, several Mauritius-based investment funds have held Adani Enterprises shares for many years, leaving only a small number of shares with retail investors. Institutional investor LIC holds about 4% in the company, the largest non-promoter shareholder.
The free float of Adani Enterprises is 24%, while that of Reliance Industries, India’s largest company in terms of market value, is 49.4% and that of TCS, second-most valued entity, is 28%.

The Adani Group has previously said that the small free float was mainly because of the high promoter holding in the flagship and that it is working on plans to expand the free float. The proposed fund-raise could dilute Adani Enterprises’s equity by 4-5%, based on its current market value of Rs 4.5 lakh crore.
“Adani Enterprises houses businesses which have a very long growth runway. While valuations appear steep optically on current financials, investor appetite has matured with many willing to take an approach that allows deployment of meaningful capital in mega scale businesses with leadership,” said former JPMorgan India director and partner of RippleWave Equity Advisors, Mehul Savla. “The follow-on offering will be a test case for the group and public market investors as the group has several other large companies which could be in the pipeline to access a wider investor base,” Savla added.
Adani Enterprises made its trading debut in 1994 and after 28 years, it is once again going to the public with an FPO of Rs 20,000 crore. In the last one year, the Adani Enterprises stock has more than doubled to its Friday close at Rs 3,903 from nearly Rs 1,700. A major part of this rise has come in the last six months, BSE data showed.

WHO maintains highest alert over Covid, but sees hope ahead | India News

New Web Series on OTT in February 2023: What to watch on Netflix, Prime...