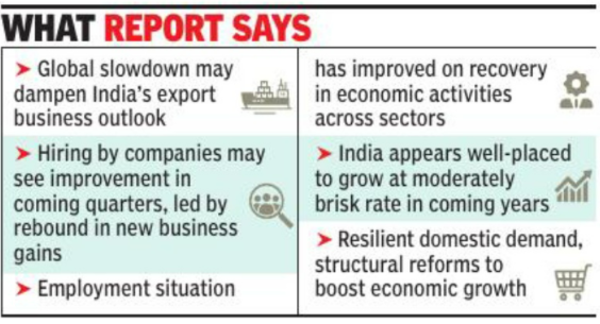 NEW DELHI: Easing international commodity prices and Kharif arrival are set to dampen inflationary pressures in coming months, a finance ministry report said on Thursday. It cautioned that a global slowdown may dampen India’s export business outlook.
The finance ministry’s monthly economic review for October also said that resilient domestic demand, a re-invigorated investment cycle, along with strengthened financial system and structural reforms, will provide impetus to India’s economic growth going forward. It said that hiring by firms is likely to witness an improvement in upcoming quarters, driven by a rebound in new business gains as firms continue to benefit from lifting of Covid-19 restrictions and possible sustaining of sales momentum witnessed during the festival season. The recovery in economic activities across sectors has improved the overall employment situation in the country.
The report also said that monetary tightening in the US has not yet resulted in a significant tightening of financial conditions in that country. “That is a future risk. When that happens, global financial conditions will tighten. That could mean lower stock prices, weaker currencies and higher bond yields, resulting in higher borrowing costs for many governments around the world,” according to the report.

“In times such as this, the best contribution that governments make to economic growth is through policies that prioritise economic and financial stability, as India has demonstrated in last two and half ye-ars,” it said, highlighting India’s strengths.
It said in a world where monetary tightening has weakened growth prospects, India appears wellplaced to grow at a moderately brisk rate in the coming years on account of priority it accorded macroeconomic stability.
“Continued macroeconomic stability of which fiscal prudence is a part and execution of various pathbreaking policies such as Gati Shakti, National Logistics Policy and the production-linked incentive schemes to boost the manufacturing share of employment lend further upside to India’s growth prospects,” according to the report.

All-party meet ahead of Parliament's Budget Session under way