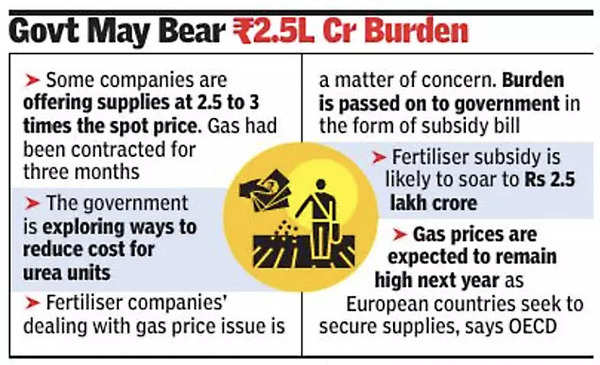 NEW DELHI: Faced with rising contracted gas prices following the Ukraine war, the government has put suppliers, including some global giants, on notice and is discussing a mechanism to ensure better prices for fertiliser plants. The move includes getting an aggregator like GAIL to procure the fuel on behalf of Indian companies or buying from gas exchanges or going for shorter contracts.
Fertiliser plants get gas supplies mainly from three sources — domestic gas, liquified natural gas (LNG) imports and spot market. In the wake of Ukraine war, the sector is dealing with higher prices and lower availability.
With some of the companies, from which gas had been contracted for three months, offering supplies at 2. 5 to 3 times the spot price, the Centre has raised the redflag and begun consultations to look at ways to reduce cost for urea units, government sources told TOI.

Also, there have been concerns at the way fertiliser companies deal with the issue of gas price as the entire burden is passed on to the government in the form of a subsidy bill. There is some discussion around providing incentives to incentivise companies that contract fuel at better prices.
Given the volatility in international prices, sources said, shorter contracts may be a better option for companies as burden of fuel cost is passed on to the Centre in way of higher subsidy bill.
The move comes as fertiliser subsidy is likely to soar to Rs 2. 5 lakh crore as the government has decided to bear the cost, instead of burdening farmers with higher prices.
The finance ministry has also come into the picture, along with the fertiliser department and the oil ministry. Multiple options are being explored, including a system of reverse auction for better price discovery and other bidders for contracts being asked to match the lowest bid (L1) for supply.
Given the way supplies are being contracted, unlike in countries such as China, the government is also exploring the option of getting an entity like GAIL to be an aggregator for importing gas. Earlier this week, QatarEnergy signed a 27-year deal to supply LNG to China’s Sinopec.
Paris-based think tank OECD on Wednesday said gas prices are expected to remain high next year as European countries seek to secure supplies. “…such efforts will push up gas prices and reduce the quantities of LNG available outside Europe, especially in Asia, with detrimental effects on some developing economies,” it said.