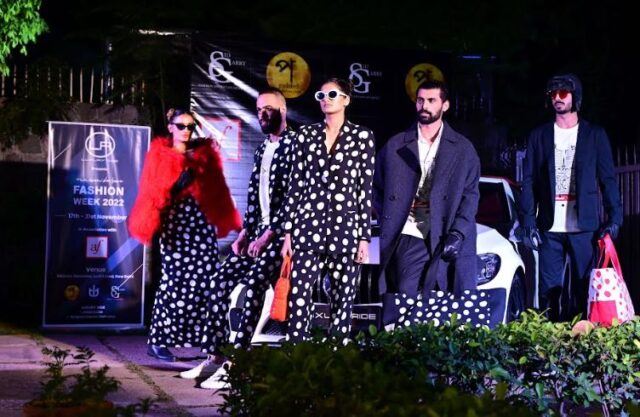 
The idea behind this fashion show is an investigation about “Manness”. The age of feminism has restructured and displaced the idea of Man, manliness and masculinity. Do we already observe the emergence of a post feminist neo – masculinity? The stereotyping of macho or toxic or chauvinist has evolved into a new phase where biologically defined, socially constructed gender role of cis man has become much more independent. After the DNA testing has started proving the fatherhood, the primordial family structure and the ownership of feminine body to define the property right has become redundant. The marriage has no more needed to exist to ensure the acquisitive aspect of consumerist capitalism defined by bloodline. After decriminalisation of homosexuality in india, Indian men has been liberated from the shackles of mono sexuality or its performance of which there is no original. Does a Man exist anymore or the lexicographic elaboration is awaiting the obfuscation of the M – word.


The circus of proto masculinity manifests itself mostly in sartorial wrapping. What would a neo masculine attire? What would a post feminist gaze be. How we would like to see each other anything beyond naked? Or is it possible that the era of clothes are over. The neo nudity would be the order of the day when the genital are not the primary target to be obliterated. Would we make clothes where men are not defined by genitalia but some other parameters. Will there be menswear or soon there will be they wear.


Do we need a cupboard or a dressing table or an interiority of the body or body can permeate both interiority and exteriority? Will the horror and terror of enlightenment exist or it vanished into blue like a gypsy camp?


Paris Dot Delhi celebrates the essence of individuality. Inspired from the works of artist Yayoi Kusama and Jean-Michel Basquiat, the clothes surpass menswear or womenswear restrictions because the aim is to bring an artistic vision to life. It comes down to forming an understanding that goes beyond the binary. And design offers a passage to that perspective. The process of delving into diverse inspirations and translating it through colours, texture and form is liberating to a point where gender ceases to dictate decisions. A perfect example would be developing Genes’ individualistic prints or fabric manipulations, where the objective is to carve out the inspiration in its finest. The same can be said about the conscious choice of colours and textiles that don’t necessarily fit into traditional masculine or feminine tropes. Genes has always championed this approach and the brand’s focus on individual expression and equality remains unwavered.

WORLD RECORD: German INTERSPORT athlete Anja Blacha is the first human being to reach the south pole solo in 57 days 18 hours and...

Regional films on OTT you can binge watch