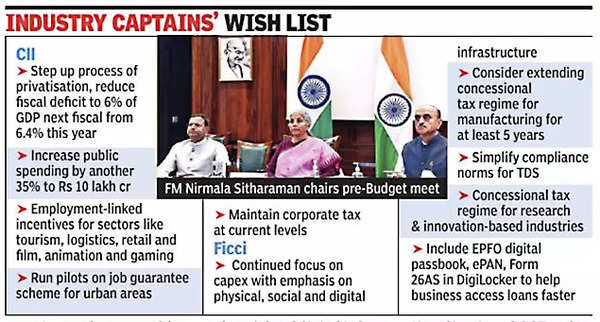 NEW DELHI: Industry captains on Monday asked finance minister Nirmala Sitharaman to retain her focus on public spending on infrastructure, which will also include private investment, provide sops for sectors that create additional jobs, continue the concessional tax regime for the manufacturing sector and help channelise funds into the green economy.
The recommendations came amid an assessment that the developments in the global economic situation may have an impact on India. “While overall, the Indian economy has done well, it is not immune to the global context. Global uncertainties and the global growth slowdown have already started to impact our exports, after a stellar performance last fiscal,” CII president Sanjiv Bajaj said while proposing a Rs 10-lakh-crore target for capital expenditure for the next fiscal year.
“This must also focus on rural infrastructure which would help create employment in rural areas and boost rural demand that is today a concern in the domestic economy,” he added.

Sitharaman kicked off pre-Budget consultations with interactions with representatives from industry bodies, infrastructure sector and climate change initiatives on Monday. She is slated to hold similar interactions with state finance ministers on Friday.
In its suggestions, Ficci called for emphasis on physical, social and digital infrastructure. “This will also give a stimulus to private investments. . . A strong thrust on public capex will crowd in private investment and give a boost to overall growth,” it said, adding that with capacity utilisation in several sectors nearing 70% there was strong indication of private investments picking up.
The infrastructure sectors too suggested higher public spend, along with rationalisation of GST and easier bank credit. While other industry chambers have also recommended rationalisation of GST, the issue is outside the ambit of the Budget as the decision has to be taken by the GST Council, comprising state finance ministers.
To provide a further fillip to job creation, CII suggested sops could be given to specific industry groups such as tourism, logistics and retail.