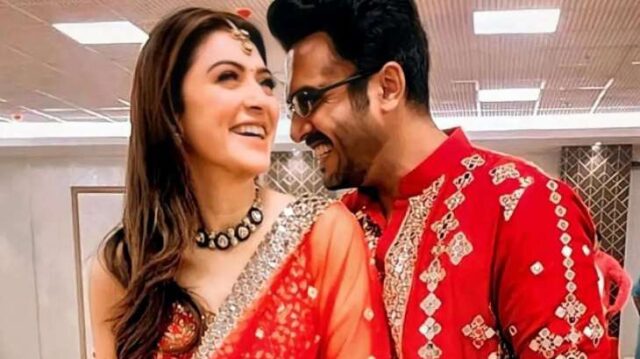 Hansika Motwani is all set to tie the knot with businessman beau Sohael Kathuriya. The duo is will be marrying on December 4, at the Mundota Fort and Palace in Jaipur. The celebration for the upcoming nuptials began recently with Mata Ki Chowki. Soon after this, Hansika started trending big time as pictures from her pre-wedding festivities circulated on social media. For the ceremony, the bride-to-be and her fiance Sohail Kathuria wore matching red outfits for the ceremony.

The bride-to-be looked gorgeous in a red saree, which she accessorised with a statement choker, matching earrings and a maang tikka. Her open tresses, heavy eyeshadow, and bridal glow glammed up her look. On the other hand, Sohael opted for red shervani with heavy mirror work for the event.

Now, we bring to you a few inside photographs from their FIRST pre-wedding ceremony: 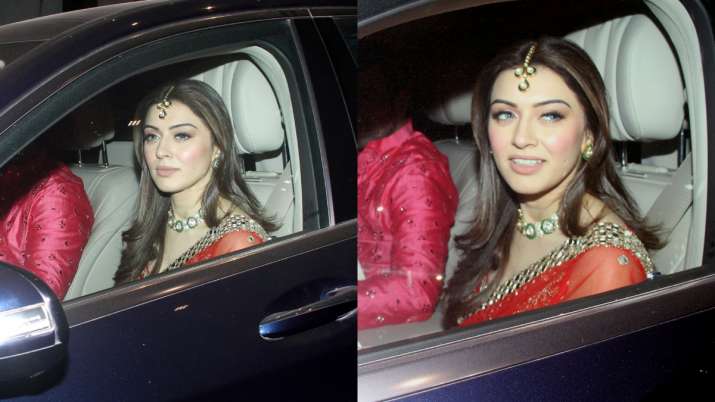 Earlier, Hansika Motwani shared some glimpses of her dreamy proposal by her long-time beau and announced her engagement on her Instagram handle. In the pictures, Motwani is seen relishing a fairytale wedding proposal. Kathuria is shown to be on his knees, presenting Motwani with a ring, in front of the Eiffel Tower. Sharing the post, the actress wrote, “Now and Forever (black heart emoji).” Sohael also commented, “I love you my life (red heart emoji) #NowAndForever.”

It is expected that Hansika’s wedding ceremony will be royal, with a touch of vintage, as the venue is a 450-year-old fort and palace. Hansika will be married in the Mundota Fort and Palace, Jaipur. The lavish destination wedding will surely create memories of a lifetime for the actress and her husband-to-be. The preparations for her big day are being made and the venue is being prepared. A source from the palace revealed that rooms are being prepared and work is being done at the palace to host Hansika’s wedding in December. The arrangements will be made well ahead of the guests’ arrival in the culturally rich city.

On the professional front, Hansika Motwani started her career as a child artist in TV serials like Shaka Laka Boom Boom, Kyunki Saas Bhi Kabhi Bahu Thi and Son Pari. She was also part of Hrithik Roshan’s hit film Koi Mil Gaya. In Bollywood, she has done films like Aap Kaa Surroor, Money Hai Toh Honey Hai. Her 50th film project Maha was released earlier this year. Up next, she will be featured in the Tamil film Rowdy Baby.