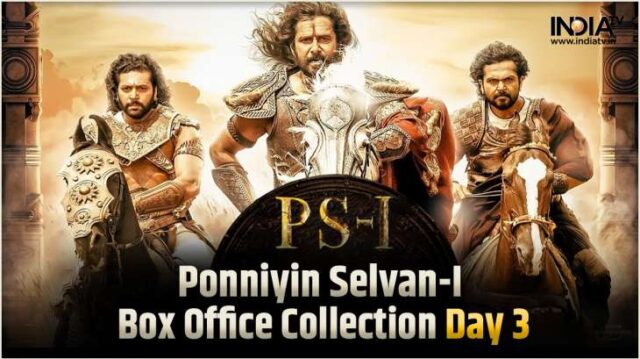 Ponniyin Selvan Box Office Collection Day 3: Mani Ratnam’s film has shown huge growth in the Hindi markets. The magnum opus starring popular names like Chiyaan Vikram, Aishwarya Rai Bachchan, Trisha Krishnan, Karthi, Jayam Ravi and Sobhita Dhulipala has hit the screen with impressive numbers at the ticket window. The film has already shattered a number of box office records and is on its way to making many new ones. But can it become the biggest South film of 2022?

The film showed good growth in the Hindi circuits and was close to earning Rs 60 cr in all languages in two days, reports Box Office India. “Ponniyan Selvan Part 1 showed good growth in Hindi as collections jumped around 40% with collections of 2.50 crore nett. This takes the total collections of the film to 4.35 crore nett over two days and the film is doing reasonable business in Hindi for a dubbed film though its really about what happens on Monday,” the report reads.

The collections Ponniyan Selvan Part1 in Hindi are as follows:

About Ponniyin Selvan I

‘Ponniyin Selvan’, the first part of the two-part film, is a brilliant story that is based on the early life of prince Arun Mozhi Varman, who later went on to be known as the great Raja Raja Chozhan. Called by Mani Ratnam as his dream project, the film features a host of top stars including actors Vikram, Aishwarya Rai, Trisha, Karthi, Jayam Ravi, Jayaram, Parthiban, Lal, Vikram Prabhu, Jayaram, Prabhu and Prakash Raj.

The film is among the most expensive projects ever undertaken in the country and is based on the Tamil classic ‘Ponniyin Selvan’ by eminent writer Kalki.

Women of Ponniyin Selvan I: Aishwarya, Trisha, Sobhita scrutinize their characters in PS 1 ​