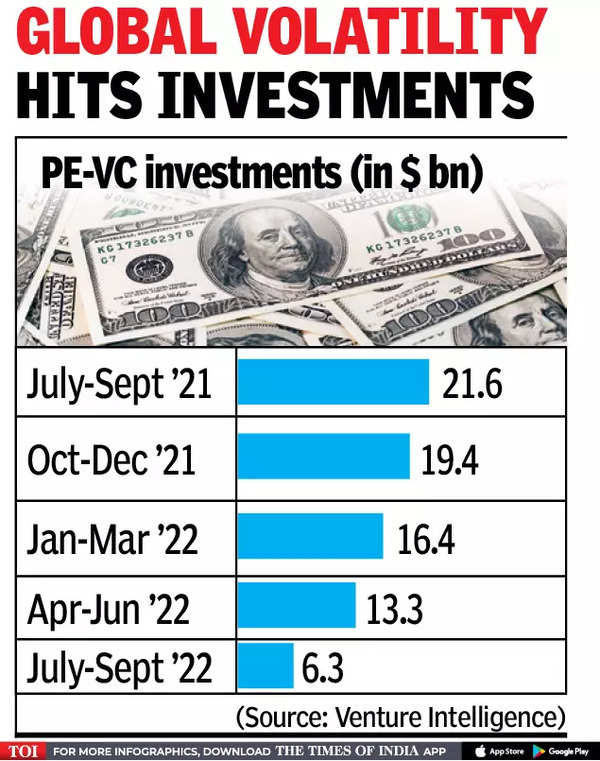 CHENNAI: Private equityventure capital (PE-VC) activity continued to slump in a difficult macro-environment, recording its fourth continuous quarter of decline in the country.
PE-VC firms invested $6. 3 billion across 258 transactions in Indian companies during the quarter ended September this year, registering a 71% decline from the same period in 2021, data from research firm Venture Intelligence shows. The investment amount also declined around 52% from the preceding quarter this year that recorded $13. 3 billion being invested across 342 deals. PE-VC investments in September itself hit a 20-month low, slumping to $1. 6 billion, down from $1. 9 billion in August.

The total PE-VC investments during 2022 now stands at $36 billion across 1,016 deals, down 26% compared to $45. 4 billion across 949 deals in the same periodof the previous year.
Growthand late-stage deals were the most impacted as the July-September quarter saw just 12 mega deals (investments worth $100 million or more) compared to 50 such transactions in the year-ago period and 33mega deals in the preceding quarter. Unicorns became rarer as the quarter saw the minting of just three new ones — OneCard, Shiprocket and Molbio Diagnostics — compared to 13 in the same quarter of last year.
Venture Intelligence founder Arun Natarajan said,given the global macro economic developments and continued volatility in public markets, the decline in private investments as compared to the lofty highs of 2021 was expected. “What is heartening, however, is the fact that we are tracking to close the year with investment figures higher than any other year, except the anomalous 2021,” he added.
Investors are also looking beyond technology companies, at diverse sectors. The largest deal in the quarter — accounting for 17% of the overall pie — was the $1. 1-billion investment in Yes Bank by global PE investors Carlyle Group and Advent International. The other top investments during the quarter included US-headquartered KKR’s $450-million investment, along with promotor Hero Group into renewable energy firm Hero Future Energies, and $315million acquisition of a majority stake in Sahyadri Hospitals by Canada-based Ontario Teachers Pension Plan.