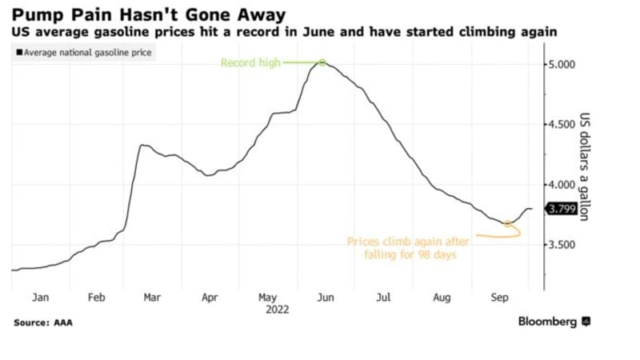 Amid what would become a 98-day streak of declines, President Joe Biden was quick to take credit in August over one of his most serious political foes: high gasoline prices.

It was a victory lap that may soon prove premature.

More than a month after tweeting he had vanquished “Putin’s price hike at the pump,” Biden faces forces that even the U.S. government can’t match. The OPEC+ alliance of oil producing countries are poised to cut production by more than 1 million barrels a day to bolster global oil prices. A decision won’t be made until Wednesday, but the prospect caused crude to surge in excess of 6% before settling just below $84 a barrel in New York.

On top of domestic considerations, the moves by OPEC+ suggest U.S. efforts to isolate Russia over its invasion of Ukraine — and cap the price of Russian oil — aren’t working as well as the Biden administration would like. The cartel’s deliberations show Moscow is working with a large group of nations in a way that is likely to boost the Kremlin’s finances. Russian Deputy Prime Minister Alexander Novak — who has been sanctioned by the US — is set to attend the group’s meeting in Vienna, according to people familiar with the situation.

Moreover, OPEC’s potential move comes at an inopportune time for Biden as he tries to control the narrative on rising costs ahead of the November midterm elections that will decide if Democrats keep control of Congress. The jump in oil portends an increase in gasoline prices, one of the most visible signs of inflation for voters.

Pump prices, which have plunged 24% from June’s record above $5 a gallon thanks to a tumble in crude, were already ticking up before OPEC began considering cuts. Since halting a nearly-100 day decline, the national average has climbed for 12 of the last 13 days as refinery outages and low imports on the West Coast strain fuel supplies. 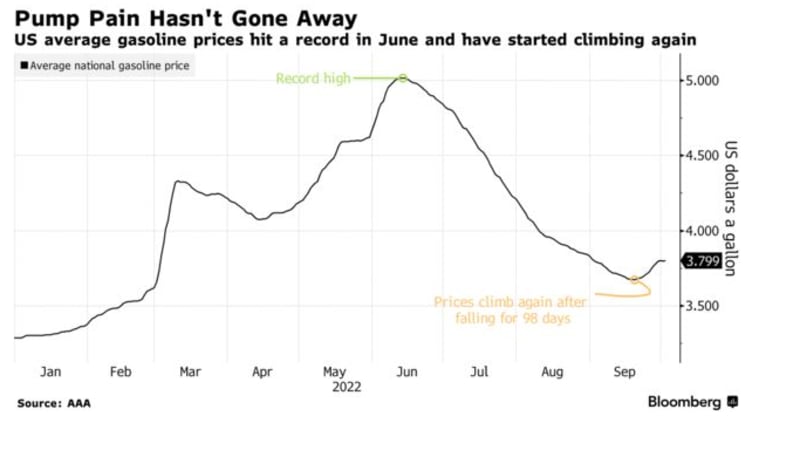 In California, home to the costliest gasoline in the U.S., prices are nearing their June peak again, and the increase is spilling over into neighboring states. The election battleground of Nevada has the most expensive gasoline after California, and other key states like Michigan and Arizona are paying prices above the national average of $3.799 a gallon, according to data from auto club AAA.

“Higher prices are bad news for Democrats,” said Kevin Book, managing director of research firm ClearView Energy Partners. “High prices did not help the president’s approval rating and they probably did not help Democrats’ standing in the polls.”

“Thanks to our efforts, we have seen some energy prices have declined sharply from their highs and American consumers are paying far less at the pump. And so that’s going to be our focus,” she said.

Gasoline prices have been top of mind, with Biden twice last week warning oil companies against raising pump prices and his Energy Secretary Jennifer Granholm publicly kicking Exxon Mobil Corp. and other oil companies for their record profits and alleging they were taking advantage of consumers.

Privately, top Biden officials met with executives from some of the nation’s largest oil and refining companies, including Phillips 66, Shell Plc and Marathon Petroleum Corp., during a tense meeting where they suggested that without voluntary action they could force the industry to stockpile more fuel and floated the possibility of export limits.

Additional meetings with the companies are planned for this week, according to a person familiar with the matter, but analysts say the options to lower gasoline prices for the Biden administration, which has spent months squeezing refiners and domestic producers to boost output, are limited.

A ban on refined products such as gasoline and diesel could ultimately end up raising prices on the import-reliant East Coast while punishing allies in Latin America and Europe.

The administration, which already unleashed a historic amount of crude oil from the nation’s emergency supply to lower prices, could tap those resources again. Since March, the Biden administration has sold more than 155 million barrels of crude from the US Strategic Petroleum Reserve, with contracts to deliver another 10 million barrels due Oct. 7.

Although the administration in the spring outlined plans for a six-month release of up to 1 million barrels a day — or 180 million in total — it has room to keep up the strategy, with 416.4 million barrels of crude still stashed away in the underground salt caverns that make up the reserve. However, the president’s ability to release SPR crude on a non-emergency basis isn’t without limits; US and international obligations create a roughly 250 million barrel floor.

Another weapon in the administration’s tool box: legislation known as NOPEC that would allow the U.S. government to sue members of the Organization of Petroleum Exporting Countries for manipulating the energy market, potentially seeking billions of dollars in reparations. An endorsement by the White House of the bipartisan legislation, dubbed by some analysts as the “nuclear” option with uncertain circumstances, would likely lead to its passage, analysts have said.

“I think the administration will wait to see how significant a price impact this has before responding,” said David Goldwyn, president of energy consulting firm Goldwyn Global Strategies, LLC. “But if OPEC drives up prices while Europe is reeling from high prices and China is challenged by Covid they are playing with fire.”

FIFA World Cup '22 lands in controversy after ban on alcohol sales at football...