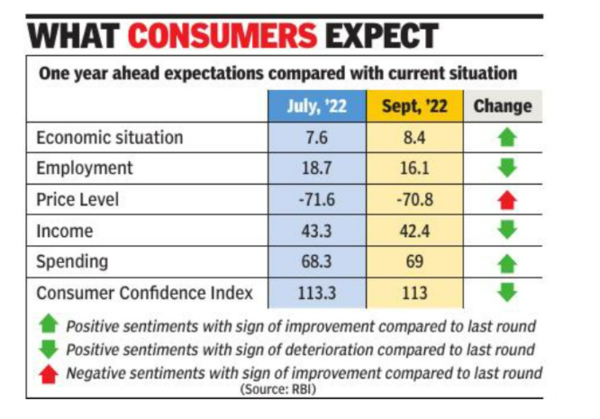 NEW DELHI: The Reserve Bank of India (RBI) on Friday cut its GDP growth forecast for 2022-23 to 7% from the earlier 7.2%, citing the impact of the geopolitical tensions, tightening global financial conditions and slowing external demand, but retained the inflation projection at 6.7%.

In its monetary policy statement, RBI governor Shaktikanta Das cautioned that there are upside risks to food prices and the risks to food inflation could have an adverse impact on inflation expectations.
“Acute imported inflation pressures felt at the beginning of the financial year have eased but remain elevated across food and energy items…. Cereal price pressure is spreading from wheat to rice due to the likely lower kharif paddy production. The lower sowing for kharif pulses could also cause some pressures. The delayed withdrawal of monsoon and intense rain spells in various regions have already started to impact vegetable prices, especially tomatoes,” said Das. Several multilateral agencies & economists have slashed India’s GDP growth forecasts due to the impact of the Ukraine war, soaring inflation & rising interest rates.
Das said the global economy was now in the midst of a third major shock after Covid-19 and the conflict in Ukraine. “As if that was not enough, now we are in the midst of a third major shock – a storm – arising from aggressive monetary policy actions and even more aggressive communication from Advanced Economy (AE) central banks” said Das.
SBI, others hike loan rate by 50bps
SBI & BoI hiked loan rates after the RBI raised the benchmark interest rate. The hike has been effected in their benchmark rate linked to the repo rate. Even HDFC hiked the lending rate by 50bps effective Saturday. ICICI also hiked rates, effective Friday itself. With the increase, EMIs will go up for those with loans on external benchmark-based lending rate (EBLR) & repo-linked lending rate (RLLR).

Why everyone wants to own Birsa Munda