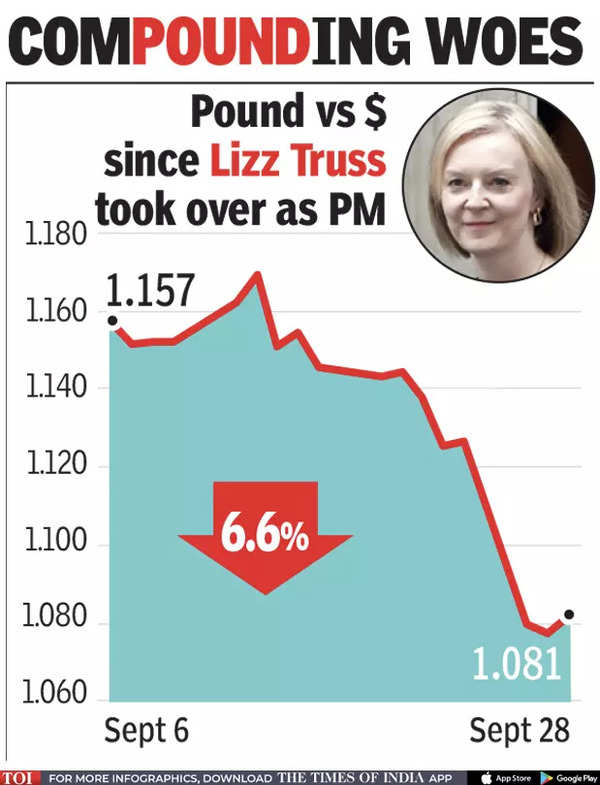 The International Monetary Fund (IMF) urged the UK government to reconsider the massive unfunded tax cuts announced last week, while Moody’s said the plan could do permanent damage to the public finances. The IMF said fiscal stimulus is inappropriate given the inflation pressures in the UK economy, and the package risks making life harder for the Bank of England. Moody’s forecast that it will lower economic growth – contradicting the view from Chancellor of the Exchequer Kwasi Kwarteng – by pushing up rates.
The warnings come amid dramatic moves in the UK asset prices in the wake of the government’s mini-budget.
The pound touched a record low against the dollar on Monday after Kwarteng brushed off criticism of his economic vision and said he has more tax cuts in the works. Borrowing costs have jumped across the UK financial system since his announcement last Friday and banks have started pulling mortgages deals, triggering a collapse in home sales.

Traders have braced for further tightening from the Bank of England in response to the stimulus plan, wagering at one point on the central bank’s key rate hitting 6.25% in 2023, which would be the highest level since 1999. Kwarteng is due to defend his policy in a meeting with US bank executives in London on Wednesday.
“Given elevated inflation pressures in many countries, including the UK, we do not recommend large and untargeted fiscal packages at this juncture, as it is important that fiscal policy does not work at cross purposes to monetary policy,” a spokesperson for the Washington-based IMF said late on Tuesday. The IMF also said that Kwarteng should use a plan scheduled for release in November to “re-evaluate the tax measures, especially those that benefit high-income earners”.
The pound declined 0.6% to $1.07 in early trades, after hitting a record-low of $1.04 earlier this week.