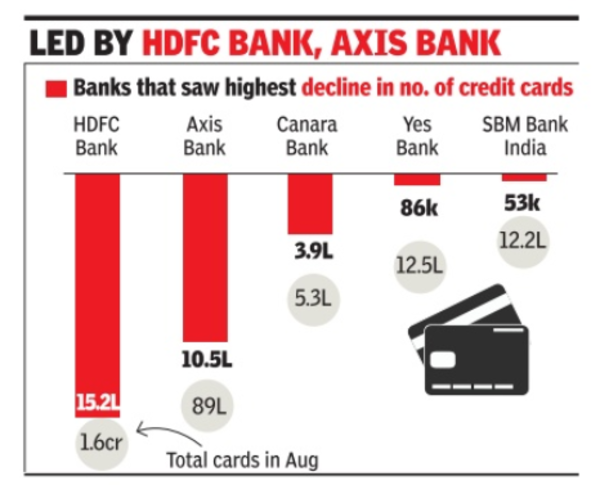 MUMBAI: The total number of credit cards declined by 22.6 lakh on a net basis in August this year to 7.8 crore from over 8 crore in the previous month due to a change in the RBI‘s regulation that required lenders to deactivate cards that have not been in use for a year. The largest declines were recorded by HDFC Bank and Axis Bank.

While the drop in numbers could be attributed to the RBI’s directive, the industry also saw a month-on-month decline in total spending in August – down 3% from July. “This is largely on account of implementation of new RBI norms. This should impact other players (like SBI Card and ICICI Bank) as well with a lag,” said Suresh Ganapathy, head of financial research at Macquarie Capital.
According to data released by the RBI, total credit card spending in shops (point of sale terminals) stood at Rs 44,943 crore in August as compared to Rs 41,766 crore in July. However, card spending online fell to Rs 67,414 crore in August compared to Rs 74,089 crore in the previous month.
“The new norms requiring deactivation of 365-day inactive cards distort the market share picture (in terms of number of cards) as various players implement this with a lag. Hence, in the interim, we would not have a clear picture on market shares. However, based on card spends, Axis Bank, HDFC Bank and SBI Card have gained market share of 50-70 basis points (100bps = 1 percentage point) in August, while ICICI Bank lost 230bps,” said Ganapathy in his report. “As we have highlighted before, the sharp movements here are also impacted by corporate spends – and hence it is difficult to conclude on retail market shares based on spends alone,” he added.
In August, SBI Card added added nearly 3 lakh cards on a net basis, which is higher than industry growth. “We believe the new ‘Cashback SBI Card’ (released in August-end) could aid their market share further going into the festive season. SBI Card has highlighted before that 90-95% of its cards are 365-day active, and so the impact of the implementation of the new RBI norms should be limited to 5-7% of cards, in our view. This should reflect in its reported cards outstanding over the next two months,” the report said.

Top 7 Things To Do In Chicago