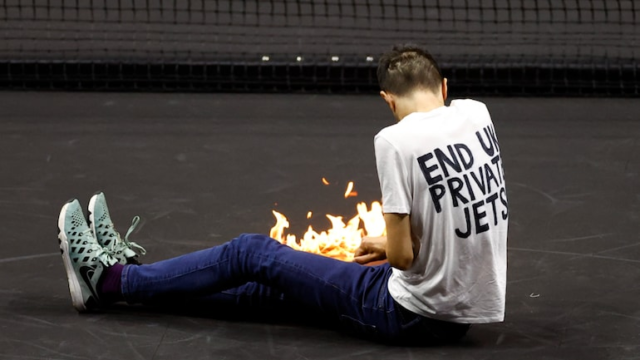 A climate change activist reportedly set himself on fire at the tennis court at Laver Cup on Roger Federer’s last day as a professional player. The man set his arm on fire on Friday to protest the use of private jets in Britain. (Image: Reuters)

A climate change activist set himself on fire at the tennis court at the Laver Cup on Roger Federer’s last day as a professional player.

A man ran on to the court in London’s O2 Arena and set his arm on fire on Friday to protest the use of private jets in Britain, briefly halting the Laver Cup meeting between Stefanos Tsitsipas and Diego Schwartzman.

The man was quickly dragged off the court by security personnel. The match, which was paused following the disruption, resumed after a quick check of the court surface.

The protester was a member of the End UK Private Jets group, which claims “carbon emissions in 2022 are genocide”, as per British media quoted by Reuters.

Roger Federer is due to take to the court later in the day for the final match of his career. The Swiss great is set to partner with his rival Rafael Nadal to face the American duo of Sock and Frances Tiafoe.

(With inputs from Reuters)

ALSO READ | Laver Cup 2022: Roger Federer gears up for Last Dance with Rafael Nadal by his side